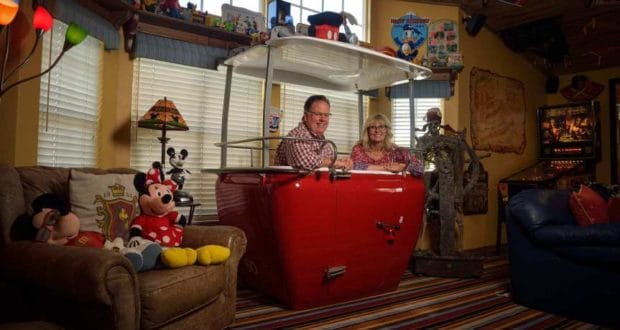 1,000 Disney Pieces To Be Auctioned as Disney Collector Sells Home

There are Disney collectors… and then there’s the Rummell Family! They took their love for collecting all things Disney to a whole new level by transforming their home of 23 years into their personal “happiest place on Earth.” With the recent sale of their home fetching $2.24 million, they are putting many of their Disney items up for sale in an auction. That’s right, you’ll have a chance to snag pieces like a Rocket Jets rocket, an Autopia car, and a buggy from Mr. Toad’s Wild Ride.

As shared by OC Register: “Disney collector Scott Rummell just sold the four-bedroom Yorba Linda home that he and his wife, Terry, spent 23 years transforming into their very own “happiest place on Earth.” Assorted ride vehicles, hand-silkscreened attraction posters, and other objects from the 25,000-piece Disneyland and Walt Disney World’s Magic Kingdom collection infuse almost every corner of the 4,569-square-foot house with playfulness. But none of it comes with the deal — the house fetched $2.24 million with multiple offers six days after listing on April 23.”

Rummell now plans to sell 1,000 pieces this December at a two-day exhibition and sale put on by Van Eaton Galleries in Sherman Oaks. He’s hoping to bring in a minimum of $2 million dollars for the Disney items.

So what are a few of the items that will be going up for auction? Some items include four vintage ride vehicles, Rocket Jets rocket, Autopia racer car, and a Mr. Toad’s Wild Ride buggy. Want a Skyway gondola? One will be up for auction and is expected to bring in around $600,000.

“Even though it seems like we’re leaving Disney behind, we’re not,” Rummell says. “We designed our Dana Point house to look like the Disney Beach Club Resort in Orlando. We actually bought art that they had in the lobby and rooms so it has that Disney nautical feel. And so, we’re not leaving Disney completely behind.”

We’ll be keeping an eye on auction details for December as we’re excited to see what pieces will be available to bid on. Would you transform your home into a Disney paradise? It looks like the Disney investment paid off big for this family!