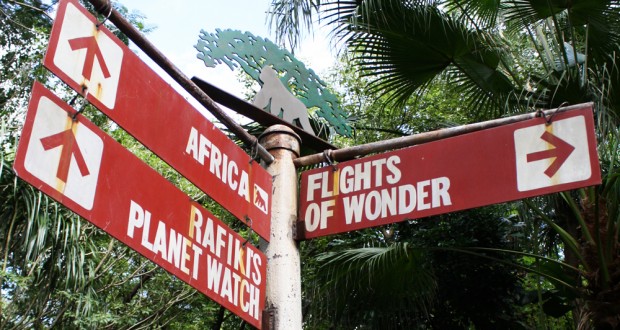 Getting into Animal Kingdom right at park opening is the best way to get the most out of your visit to the park. Not only will you have short waits for the rides but you will also have the best chance to see animals! Most of the animals in the park are most active early in the day, so this would be the best time to start off with the Kilimanjaro Safaris. Which brings me to my next point….

9. The best order go through the park

When you get to the park, you want to go to see the most attractions as fast as possible. While going when the park opens will work best, I’ve found that when you first cross the bridge in front of the Tree Of Life and go around the park clockwise around will be the most efficient way to see all the attractions and the best chance to see the most animals. This order of doing things can also be helpful on nights when the park is open later but the animal attractions close early, as you’ll end in Dinoland USA where everything is still open.

8. Use Fastpass for rides, not shows

A great tip for Animal Kingdom and any park is to not “waste” Fastpasses on shows. At almost any show, a Fastpass will not honestly get you anything special and you’re simply just better off using it on another ride. You’ll get to enter the show before the guests in the stand by line, but there is no reserved seating area, and since the shows are at set times anyway you’ll be waiting just as long to see it.

While there is a lot of walking in Animal Kingdom and Walt Disney World in general, the walking trails in Africa and Asia are not to be missed. The walking trails feature many rare and unusual animals such as birds, tigers, and gorillas that you will not see anywhere else in the parks. The Maharajah Jungle Trek is my favorite of the walking trails, and is located right in Asia. If you’re taking the time to ride Expedition Everest and Kali River Rapids anyway, you should definitely spend some extra time seeing the animals.

The lands in Animal Kingdom are all painstakingly created to look as accurate as possible to the parts of the world the represent. Imagineers did a lot of heavy research on the history and culture of these places, and because of this there is a lot of little details that are easy to miss. By doing your homework beforehand, you can get the full effect of the park’s scenery. Browse some Disney fan sites like this one before your trip, or grab one of the Imagineering Field Guide books to learn a little bit about the parks and get the most out of your visit.

Animal Kingdom is home to some of the best shows in Walt Disney World. Festival of the Lion King was rated the Best Show in Walt Disney World, and Finding Nemo: The Musical is also an amazing Broadway quality show. Even the smaller shows such as Flights of Wonder are very well done and entertaining for the whole family.

4. Be a Wilderness Explorer

The Wilderness Explorers are based on the scout troop that Russell from Up! belongs to and is a great idea for kids and adults alike. This program can help kids stay focused on a scavenger hunt style game while visiting the parks, and even for adults the experience is educational in terms of the animals and the different parts of the world represented in the park.

There are lots are rare and unique characters that can be found in this park. Animal Kingdom is home to characters you can meet like Baloo from the Jungle Book, Flik from A Bug’s Life, Dug and Russell from Up, Pocahontas and Rafiki. You can even find some familiar faces, like Mickey and Minnie, wearing special safari outfits outfits!

A lot of people wouldn’t think to do their shopping in Animal Kingdom, but is actually a great place to pick up souvenirs for your trip. The shops in each land each have fair trade goods you can buy from their respective parts of the world, so you can find lots of things that you wouldn’t expect to find at Walt Disney World, and in some shops the money you spend will actually go back to the people who made the goods. Even at Discovery Island you see many of the same things you would find at other parts of Disney stores such as World of Disney and Mouse Gear, but these stores normally much less busy than those other stores you would probably think about going to first.

There are plenty of varieties of foods to try in Animal Kingdom. The park is home to many different kinds of authentic foods from each of the lands represented at the park. Whether you’re looking to try African cuisine at Tusker House, or pick on some Asian snacks, Animal Kingdom has a lot to offer in terms of food. (For even more delicious food, hop on a bus to Animal Kingdom Lodge, and enjoy a meal at Boma or Sanaa!)

2016-01-02
Chaz Saldi
Previous: 7 Awesome Tips To Make The Most Of Shopping At Walt Disney World
Next: 10 Excellent Tips For Budgeting And Planning Your Disney Trip