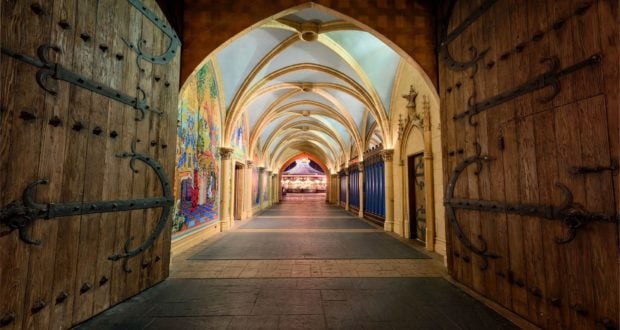 10 Things You May Have Missed at Magic Kingdom

One of the things we love most about Disney World is the incredible amount of detail put into each and every part of every single park. The Imagineers who design these places think of everything, and that makes it possible to explore these parks time and time again without ever getting bored or feeling like you’ve seen it all. Magic Kingdom is no exception to this rule. This park has a number of fun little details and hidden attractions that make it an absolutely amazing place. The only problem is, many people don’t know where to look for these hidden gems. If you’re planning a trip to the Magic Kingdom soon and you want to make sure to see some things you haven’t experienced before, this is the list for you. Check out this collection of frequently missed details and attractions and add them to your Magic Kingdom plan today!

Everyone notices Cinderella Castle as they enter the Magic Kingdom. What a lot of people don’t see is the pretty little wishing well located to the side of the castle. Visit this well, drop a penny in, make a wish, and then enjoy some amazing people-watching from a little-known place in this magical park.

Character meet-and-greets may not be happening right now, but that doesn’t mean we have to go without seeing Disney friends entirely. To see characters in Magic Kingdom, you just have to know where to go. Our first suggestion is to spend some time on Main Street, U.S.A. in order to watch for “character cavalcades”. These run at random throughout the day and include a variety of different characters, depending on which cavalcade you happen to catch. Other places to see characters include (but aren’t limited to):

One attraction that is often looked over is the Carousel of Progress. We’ll admit that this animatronics show could use an update. That said, it’s a classic that Walt Disney himself had a hand in creating, and something we think every Disney fan should see. Besides, there’s rarely a wait to see the show, and the air conditioning can feel really nice on a hot day.

Did you know you can actually walk straight through the castle to get from the main hub to Fantasyland? You can, and some seriously amazing art is found in the breezeway that runs from one side to the other. Be sure to take your time and admire the beautiful mosaics that depict the story of Cinderella as you walk through.

5. The Sword in the Stone

When you do reach the other side of the breezeway, continue walking straight toward the carousel. There you will find another fun little detail that many don’t seem to notice: the sword in the stone. Be sure to try your hand at pulling the sword from its place to see if you’ll be the next ruler of the land!

Like the Carousel of Progress, Country Bears Jamboree often goes unnoticed as people stroll on by, headed to the more exciting attractions. However, this is not something we recommend doing. This classic animatronics show is surprisingly entertaining, and one we make sure to catch fairly regularly. Sure, it’s not as exciting a coaster, but there is something charming about it for sure.

While on Main Street, U.S.A., take a minute to duck into the little nook between Uptown Jewelry Store and Crystal Arts. Sit for a bit and listen. You’ll have the opportunity to hear what’s going on in the buildings upstairs, providing some entertainment and giving you a chance to feel very at-home in this fictional turn-of-the-century town.

Mr. Toad’s Wild Ride was once a staple attraction in the Magic Kingdom, and many fans were upset when the attraction was taken down to make room for The Many Adventures of Winnie the Pooh. Therefore, it should come as no surprise to you that Disney’s Imagineers came up with a couple of ways to pay the Toad tribute. First, while riding The Many Adventures of Winnie the Pooh, watch for a photo hanging on the wall of Owl’s house. This is a picture of Mr. Toad handing over a deed to Owl, a nod to the fact that this was once the home of this beloved Toad. Another tribute can be found in the pet cemetery outside of the Haunted Mansion. Look closely and you will see a small statue of Mr. Toad, helping to ensure he can rest in peace.

Have you always wanted to score big on Buzz Lightyear’s Space Ranger Spin? To do this, all you really need is a bit of knowledge. There are a few different targets throughout the ride that offer an enormous number of points. The two we are able to hit most often are the robot hand as you leave the first room and the one at the bottom of Zurg’s ship in the third room. Also, it should be noted that you can just hold the trigger down the entire ride. No need to release it between every shot.

We might all be missing out on nightly fireworks at Disney right now, but that doesn’t mean all the nighttime fun is gone. Be sure to watch for the Electrical Water Pageant as you leave Magic Kingdom. This is one of those little gems that many people don’t even know to look for. It features a light parade on the water and is absolutely worth keeping an eye out for as you ride the ferry or monorail at the end of the night.

2021-06-28
Chelsea Gonzales
Previous: Review of Monsters at Work Is All Laughs and Fun
Next: Not One, But Two Episodes of Monsters At Working Coming