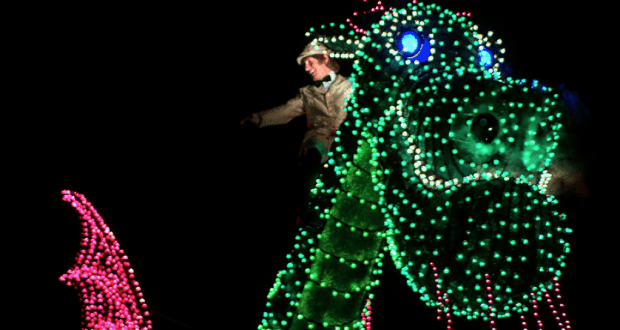 10 Things We Wish Walt Disney World Would Bring Back

In the 50 years since Walt Disney World first opened, it has undergone many changes. Since 1971, three new theme parks, multiple Disney resort hotels, the Disney Springs district and endless new possibilities to experience the magic have been added to the Disney World resort. And while we love the additions to the parks, sometimes they come at the cost of older attractions—some that we really loved and wish Disney would eventually bring back. There are even some non-attraction things we loved about Disney World that we wish would return as well. Here are 10 of the things we’d like to see resurface at the parks.

This enormous attraction was at Magic Kingdom from 1971 to 1994. What made the attraction so giant was the 11.5-million-gallon manmade lagoon in which a fleet of 12 submarines made the journey “20,000 leagues under the sea.” The attraction was based on Jules Verne’s novel by the same name. As part of the experience, Guests could step into a submarine and set out on a journey where they could see Captain Nemo, his submarines, many merry mermaids and even the Lost City of Atlantis. While it was a Guest favorite, it was also a very costly and time-consuming attraction to maintain. The vast lagoon had to be drained several times a year so that it could be cleaned, and then it had to be refilled. Some of the submarines also experienced leaks from time to time. Perhaps this is why the attraction was said to be “temporarily closed” in 1994, only to officially close in 1996. Today, Ariel’s Grotto stands where Guests once could explore the depths of the sea. SpectroMagic was a 20-minute long nighttime spectacular that wowed Guests at Magic Kingdom from 1991 to 1999. It was a bit like the Main Street Electrical Parade and consisted of 29 floats and 7 whirling units. The spectacular display of lights was made possible by more than 100 miles of fiber optic strands, sound effects and a musical score. Jiminy Cricket served as emcee of the nighttime event and welcomed Guests each night with these words: “Welcome to the splendor, the spectacle, the sparkling sensation, where the romance, the comedy and thrill of Disney fantasies comes to electric life! And now, the Magic Kingdom proudly presents, in a million points of musical light, the magical world of SpectroMagic!” It was quite an event to witness. Peter Pan, Pinocchio, Snow White and the Seven Dwarfs, Cinderella, Alice in Wonderland, the spinning hippo from Disney’s Fantasia, Ariel and Mickey Mouse himself—as well as other beloved Disney characters—had starring roles in this nighttime spectacular. “SpectroMen” rolled around the parade route on their whirly balls, interacting from up high with Guests along the route. The lights and music ended forever in 1999. SpectroMagic was replaced by the Main Street Electrical Parade, which had been the nighttime spectacular in the years before SpectroMagic first debuted.

The Skyway was an aerial gondola system at Magic Kingdom until 1999. It transported Guests from Fantasyland to Tomorrowland and back. We miss the Skyway, but we won’t complain too much—Disney is bringing it back—in a way. Thankfully, we now have the Disney Skyliner!

We love the Seven Dwarfs Mine Train in Fantasyland at Magic Kingdom, but we Disney fanatics still have a place in our hearts for the older attractions, and Snow White’s Scary Adventure—open from 1971 to 2012—was one of our favorites. It was a dark ride that moved Guests through the story of Snow White and the Seven Dwarfs. The first version of the attraction was created with ride vehicles that could seat four Guests. It told the fairy tale from the viewpoint of Snow White, which was confusing for some Guests who wondered why Snow White herself wasn’t featured in the attraction. In 1994, an upgraded and less scary version of the ride opened. This time, the attraction included Snow White. Ultimately, however, the ride closed in 2012 to make room for Princess Fairytale Hall—a part of the expansion of New Fantasyland.

The Maelstrom was one of only two rides on the World Showcase at EPCOT. It was housed inside the Norway pavilion from the time of its maiden voyage in 1988 until its farewell voyage in 2014. The dark ride aboard a Viking vessel gave Guests a look at Norwegian mythology and took them on a journey through an enchanted swamp. During the ride, an angry troll was believed to push the vessel backward down a 28-foot high waterfall. At the bottom of the waterfall, the vessel floated the waters of the North Sea. The ride concluded and Guests disembarked at a Norwegian harbor. Today, Guests can enjoy the Frozen Ever After attraction, which debuted in June of 2016, but true Disney fanatics will always remember the Maelstrom. 5. Dreamfinder and the original Journey Into Imagination

The original version of Journey Into Imagination inside Future World at EPCOT ran from 1983 to 1998. It was 14 minutes long and featured an omnimover ride vehicle. The experience was hosted by Dreamfinder—a man with red hair, a red beard and a black top hat. (Figment the dragon was created from the “Dreamcatcher.”) The ride itself was a journey through the imaginations of Dreamfinder and Figment. It highlighted four areas of the imagination—an artistic area, a nightmare and book area, a show-biz and acting area and a science area. The song “One Little Spark” played throughout the ride. While there are certainly nods to the original version of the attraction in the current version, we miss seeing Dreamfinder and his Dreamcatcher.

Disney World fans all the world over mourned the closure of The Great Movie Ride at Disney’s Hollywood Studios. It had been a Guest favorite since 1989, and when it closed in August of 2017, we were indeed sad to see it go. It was a dark ride that took Guests through scenes from some of Hollywood’s most memorable films. The queue began outside the Chinese Theater directly down the street from the main gates of Hollywood Studios. During the 22-minute-long experience, Guests enjoyed more than 60 audio-animatronic robots made into the likenesses of famous characters in their respective films. The ride featured scenes from The Wizard of Oz, Disney’s Fantasia, Mary Poppins, Singin’ in the Rain, The Public Enemy, Raiders of the Lost Ark and Tarzan, among others. While we miss The Great Movie Ride, we will say the replacement – Mickey and Minnie’s Runaway Railway – is an extremely impressive attraction. We’ll always remember the Great Movie Ride however! This spectacular nighttime parade took place each night at Magic Kingdom from 1977 to 1991, from 1999 to 2001 and from 2010 to 2016. The performance featured more than 80 live performers covered in thousands of electronically-controlled lights that were synchronized to magical music. Over 11,000 LED lights were worn on the dancers alone. The song played during the parade remains the soundtrack to many Disney fans’ childhood memories of the parks, and fans will remember the vocoder voice effects and the famous words that introduced the parade each night: “Ladies and gentlemen, boys and girls, Disney World proudly presents our spectacular festival pageant of nighttime magic and imagination in thousands of sparkling lights and electro-synthe-magnetic musical sounds—the Main Street Electrical Parade!” Mickey, Minnie, Cinderella in her pumpkin coach, Pluto, Goofy, Alice, the White Rabbit and Caterpillar from Alice in Wonderland, Snow White and the Seven Dwarfs, Tinkerbell, Peter Pan, Pinocchio and other characters starred in this fantastic parade. Even the Jolly Roger, Cinderella’s Clock Tower and the Seven Dwarfs’ Diamond Mine were showcased in the parade. If you ever experienced this fabulous nighttime spectacular, you know why we wish it would return to the most magical place on earth.

Central Florida is known for its surprise afternoon showers—even if the Weather Channel’s crystal ball predicted otherwise. For this reason, many Guests at Disney World have ponchos with them so they aren’t completely drenched by the short-lived but torrential downpours. Until 2003, when the rains came, so did a sea of brightness among Guests. The ponchos at Disney World were bright yellow with a giant Mickey on the back. In 2003, however, Disney did away with the yellow ponchos and replaced them with clear versions. At least Mickey is still on the back, but what in the Disney World was wrong with yellow??

From 1987 to 2016, Guests of all ages could enjoy the experience of purchasing Disney Dollars either as souvenirs or to use inside the parks. They were first printed in May of 1987, and at that time, the only denominations available were $1 and $5 bills. Later in 1990, Disney began to print the $10 Disney bill. They were similar in size to U. S. currency and featured Mickey, Minnie, Donald, Goofy, Pluto, as well as park icons. The A Series was for Disneyland, and the D Series was for Disney World. In 2005, Disney added a T Series, which was for bills sold at Disney Stores. In 2016, however, it was announced that the bills would no longer be printed. Any existing bills would be honored at the parks and would never expire, meaning if you have any among your souvenirs, they are still legal tender in the parks, but remember, once they’re gone, they’re gone forever!