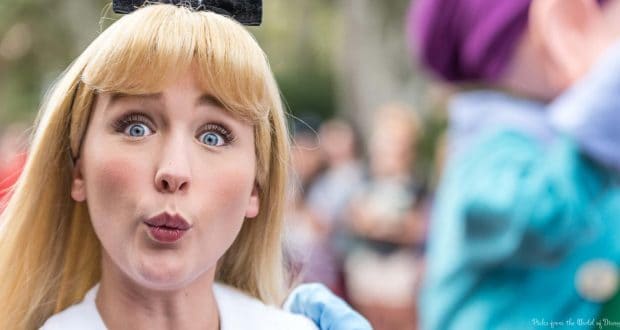 The Walt Disney World Resort in Florida is your go-to destination for fun, no matter what time of year! It’s full of magic, full of wonder and full of dreams being realized. But it has been known for some weird and strange things as well. Don’t believe us? Read on about 9 of the strangest things we’ve seen in the parks.

9. Leaving loved ones at Liberty Square

If you’re a frequent flyer at the parks, you’ve no doubt heard about this one a time or two—the act of spreading the ashes of a departed soul in the Haunted Mansion. But it’s not just a rumor. Guests believe they are doing what their loved ones would have wanted—leaving their remains in one of their most favorite places. The stranger (and sadder) thing happens afterward—when the ride must be stopped, closed and cleaned. Yes, the ashes are vacuumed and/or swept up and discarded. The moral of the story: despite the request Uncle Ed made in his final moments, don’t leave his ashes in the Haunted Mansion, as they will only be cleaned up and thrown away, which isn’t the best way to honor a loved one’s memory. 8. People running away from the Flight of Passage attraction

Since its opening in May of 2017, the Flight of Passage attraction at Pandora at Disney’s Animal Kingdom has seen some lengthy wait times in the queue—especially during peak seasons in the park. It’s still impossible to get a FastPass+ time for the attraction unless you’re able to secure one 60 days in advance. So it was strange to me on January 1 of this year that Guests began to flee the structure that housed the Flight of Passage ride. Hmmm. Most of those people were in the stand-by queue for more than 2 hours. It soon became evident why they would do something so strange. The Cast Member at the podium asked us all to clear the area because people were leaving the building due to a fire. Strange turned to quasi-panic as I waited and waited for my two daughters, my best friend and my nanny to exit the building. They had just gone through the FastPass+ queue moments before. Thankfully, no one was injured, no banshee was hurt in the mayhem, and the ride reopened within an hour or two.

My cousin and I traveled together several times to the parks with our families. And every time we began preparing for our trip, the same conversation ensued. She was determined to buy new sunglasses before each and every visit to the parks. And every single time we visited, she lost her new pair on a ride. Every. Single. Visit. Finally, she decided to begin buying two pairs of sunglasses to take to Florida—in case she lost one. Of course, she was just inviting the inevitable. The year that she lost both pairs—one at Magic Kingdom and one at EPCOT, she was bent on retrieving at least one pair. So I followed her to the Lost and Found building that was at that time in front of the Transportation and Ticket Center. She proceeded to tell the Cast Member her sad little story of the pairs and pairs of rogue sunglasses to which she had bid farewell. “Have you had any sunglasses turned in?” she asked the Cast Member, who in turn smiled as she turned around and stepped behind a door. Over the next few minutes, the Cast Member produced tray after tray after tray of rogue sunglasses—trays of kids’ sunglasses, trays of adult sunglasses. Red glasses, blue glasses, chartreuse glasses, rainbow glasses, tie-dye glasses. It looked a year’s worth of inventory for the Ray-Ban store. Needless to say, she didn’t find the ones she lost, and she didn’t dare take something that wasn’t hers. Funny, because the Cast Member told us that they collect tons of sunglasses every month, and very rarely does anyone come in to claim them.

6. A misunderstanding at Cinderella’s house

One evening, a young woman and her daughters were eating dinner at Cinderella’s Royal Table inside Cinderella Castle. The woman was ecstatic, as were her daughters, and the young mother was cherishing every moment. She had read that they would have the opportunity to meet several of Cinderella’s friends, so when a photographer showed up and began pointing the camera toward the woman, she thought nothing of it. And because she was relishing the entire experience, she also thought nothing of (strangely enough) striking pose after pose for the camera—only to realize moments later that the photographer wasn’t taking photos of her, but rather of the young couple seated behind her. In fact, the woman almost foiled the photos of the young man’s marriage proposal to his girlfriend! 5. A herd of Guests on Main Street

If you’ve ever visited the most magical place on earth during peak season—summertime, Christmastime, etc.—you know that the parks can get extremely crowded, as evidenced by the wait times in the queue, the wait times in the quick-service restaurants and the sheer number of people walking next to, in front of and behind you. And there’s probably no better place in the parks to feel the crowds around you than on Main Street U.S.A. One day, as hundreds upon hundreds of Guests made their way toward Cinderella Castle, Main Street became temporarily clogged and it was nearly impossible to move more than a few inches at a time. (It must have been on a day when Magic Kingdom closed its gates to Guests early.) Suddenly, a man started to “moo.” He continued despite the odd looks from a few people around him. But it only took a couple of minutes before a hundred or so Guests were mooing as well, signaling their frustration at being herded like cattle down Main Street.

4. A flying leg at Mt. Everest

A man boarded a train at the Expedition Everest attraction at Animal Kingdom. It was his favorite ride in the park. He knew every last inch of the ride—from the 80-foot drop to the Yeti to the backward drop in the ride. But on this particular expedition, the man saw something fly past him during the ride—and he knew it wasn’t part of the experience. There are no animatronic birds and no projectiles in the attraction. When the ride vehicles stopped for Guests to disembark, the man noticed another Guest 3 seats ahead of him calling out to the Cast Member, “I lost my leg on the ride! My prosthetic leg!”

3. The birth of a meme aboard the log flume at Splash Mountain

A woman had traveled to the parks with her husband and couldn’t wait to ride Splash Mountain. It was her favorite ride, and it was always the first thing she enjoyed once she arrived at Magic Kingdom. But at the last minute, her husband decided he would forgo a tumultuous 5-story drop at a 45-degree angle this time. It just wasn’t his bag. This made his wife disgruntled—to put it lightly. So, to show her disapproval of his absence on the ride, she decided to make the angriest face she could for the ride photo. And she succeeded. She was so good at it, that her face began to appear in social media on memes. Her scowling face was superimposed onto the body of Grumpy Cat, as well as the Mona Lisa and the farmer’s wife in the famous “American Gothic” painting. The moral of the story—oh be careful little mouths how you frown. You just might end up a social media hit! 2. Mr. Toad and the protests

In the late 1990s when it was announced that Mr. Toad’s Wild Ride would close to make way for another attraction, fans of the famed ride let their voices be heard. Thousands of Disney World fans who didn’t approve of closing Mr. Toad’s Wild Ride decided to protest the decision. Fans initiated writing campaigns and letters poured into Disney World’s mailbox, detailing Guests’ dismay. They made T-shirts with slogans against Disney’s decision. Perhaps no one could have seen the protests coming. Either way, they were in vain because the ride was closed and now an attraction inspired by Winnie-the-Pooh stands where Mr. Toad once did. 1. The strange phenomenon of the 12-foot-wide Guests

This strange phenomenon has been witnessed by many people who have visited Magic Kingdom. It happens more often during peak seasons in the park. The 12-foot-wide Guest can pop up anywhere, but it’s seen most often in the thoroughfares of Fantasyland. You may find yourself walking along, enjoying the park, and suddenly, you come upon the 12-foot-wide Guest—only to discover it’s actually 5 to 8 people walking side-by-side, not allowing any other Guest to pass by them. The phenomenon grows stranger still as some of the 12-foot-wide Guests halt unexpectedly, pull out their smartphones and begin snapping away—all while scores of people line up behind them, simply trying to get to their next FastPass+ time. Strange (and frustrating) indeed!