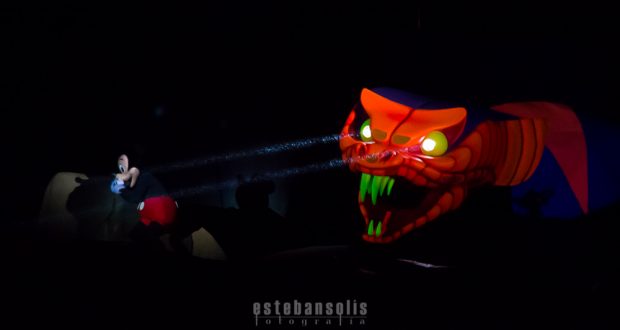 Walt Disney World does not exactly strike fear into the hearts of most people. As a whole, you’re in for a fright-free vacation. But there are certain situations that can be frightening, or parts in rides that are scary. We don’t wish frightening experiences on you, but these are some things you might run up against:

Getting there is often the most stressful part of a Disney vacation. You can plan and plan and plan some more, but there is always the possibility that something will go wrong out of your control. Flights are usually the biggest culprits. Flights can be delayed or cancelled due to weather, or mechanical malfunctions, or crew mix-ups, or just freak accidents. If your flight is delayed you might miss a reservation, or even miss out on a whole park day. It’s such an awful feeling.

The online FastPass system is really great in a lot of ways, but with so much to plan and sort out, it’s easy to forget some of them. A Disney park is so distracting! You get wrapped up in your current activity that the next one goes right out of your head. Or you overbooked! That’s just so frustrating. Luckily, there is a fifteen-minute grace period after your FastPass time is up. But sometimes that’s just not enough! The planner’s worst nightmare! Walt Disney World’s website is notoriously awful. Seriously so bad. It’s known for glitching and crashing and being difficult to navigate. It tends to be terrible at 6am when 30 day out guests are trying to get Flight of Passage FastPasses (not that I’m bitter). But website issues can be frightening because all your planning hard work could be ruined in a matter of minutes. However, Disney Guest Services is pretty amazing at helping out if something does go wrong.

7. The Tower of Terror Drop

Once you get to the Parks there’s some seriously frightening fun to be had! One of the spookiest and most thrilling rides in all of Walt Disney World is the Tower of Terror in Hollywood Studios. The story line in and of itself is pretty frightening: checking into a creepy hotel. But when the elevator starts going up – and keeps going up – you know you’re in for something crazy. And then: you drop. This drop is multi-stories tall and absolutely frightening, but in a fun way! In the nighttime spectacular fireworks show Fantasmic! at Hollywood Studios, Mickey battles villains to take control of his dreams! At one point in the show, Jafar turns into a massive snake that slithers around the stage, shining his spotlight eyes into the audience. It’s an impressive piece of theatre, but also really frightening to see Mickey up against him!

For those unfamiliar with Florida weather patterns, there is almost always rain in the forecast. Most of the time it’s not a big deal and can easily be avoided. But sometimes, especially in the warmer months, the rain comes in the afternoon in a big way. And if you aren’t expecting it, these can be kind of frightening. Florida afternoon storms are intense. They’re big and booming and come in an absolute downpour. They’re more like monsoons, really, with the rain coming down sideways. But they only last like fifteen minutes tops. Make sure to pack a poncho – you’ll be good to go. This one is especially frightening for those who are claustrophobic…. Walt Disney World rides break down all the time, but there’s always an emergency exit readily available. If the monorail breaks down, guests are truly stuck. Monorails get delayed every day, but they usually start up again within minutes. But it has been know to happen when the monorail stops for a huge chunk of time. This can be unsettling, scary, and maybe just boring.

Anyone see a Yeti? You can on Expedition Everest! Guests love this rollercoaster in Animal Kingdom for its story and thrill factor. On your Himalayan adventure guests travel far into the mountain and run right into the dreaded Yeti! But the Yeti has eaten the tracks and there’s no way to continue – except to go backwards! While this is the highlight of the ride, it’s also a bit frightening to go hurtling backwards through Everest.

Test Track in Epcot is awesome. It has twists and turns and safety tests that kind of make your head spin. It’s not a super frightening ride – until the climax. Most of the ride is indoor – that’s where you do energy efficiency and coordination tests. But the last check of the ride happens outside where speed can be tested. The doors to the outside track look just like an ordinary wall, so your car races toward it at top speed before the wall breaks away and you’re outside! It’s so fun, but so terrifying if you don’t know about it. The scariest moment any parent or guardian can face on vacation: losing a child. Let’s face it: Walt Disney World is huge. There are thousands of people everywhere you look. Unfortunately it’s not difficult to get separated from your party. While losing sight of a child in Disney is absolutely frightening, it’s important not to panic. Before you start your day, have a designated meeting spot in the park in case this event occurs. Also, teach your kids to go straight to a Cast Member if you’re separated. Cast Members are trained and amazing at helping to reunite families.

No More Churros: You’re hungry. You’re craving that cinnamon sugar goodness. You wait in the ridiculously long cart line. It’s finally your turn. “Hi,” you say wearily. “One churro please.” But the Cast Member shakes her head: “Sorry, we’re all out. They’re bringing more out in a minute, but you’ll have to wait.” The horror. Day ruined.