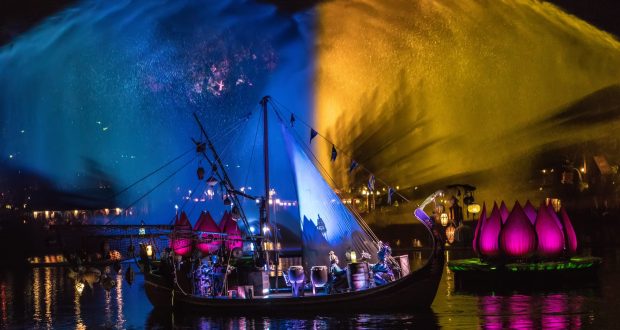 Now that Walt Disney World’s Animal Kingdom is open during night-time hours, it wouldn’t be the same without an appropriately animal-themed, evening spectacle of light and sound!  Rivers of Light features stunning video projections and laser light on water, creating magically shifting animal shapes against the backdrop of the lagoon; there’s an original score, and stunning floating set pieces.  Oh, and lots (and lots) of lotus blossoms!  You won’t find fireworks here, but we still think it’s worth sticking around for!  Here are 10 things you need to know about Rivers of Light.

Because it would scare the animals at the park, no fireworks are used during Rivers of Light.  As a result, this show is a much gentler, quieter, and less potentially frightening experience for small children than some of the other evening shows on property.  It won’t be the most thrilling evening spectacle for older viewers, but we find the colorful animal creations on the water beautiful, and a perfectly relaxing way to end a day at Animal Kingdom.

If you have Made with Magic accessories, you’ll want to bring them to the show, and watch them light up in time with the music and lights.  We love the Made with Magic 3.0 Connected Ear Hats (you can buy them at a variety of shops on property), which you can adjust for color and speed using Bluetooth!  If you didn’t bring an ear hat, you can always purchase a Made with Magic Rivers of the Light Totem Glow Wand at the show (it has 4 animals that light up in sync with the show), for anyone in your party who wants to take home a glowing souvenir.

We’re always looking for new photo opportunities in Walt Disney World, and if you’re the same, look no further!  We saw a PhotoPass photographer walking around at the bottom of the amphitheater, so if you’re able to grab seats near the bottom, you’ll be able to pose with a Rivers of Light prop to have your photo taken before the show starts.  Try timing your shot right before the show, when you can see the floats getting into place behind you (or immediately after the show, when the floats are still there) – but keep in mind that once the show starts, the photographers will no longer take photos.

You’ll probably be full from your meal at one of Animal Kingdom’s fantastic restaurants, but if you’re not, you can bring food and beverages in to enjoy during Rivers of Light.  We didn’t see any concession stands inside when we saw the show, but there were stands nearby, outside the entrance. Families with kids in particular will love the variety of adorable glowing lotus flower-themed snacks and drinks: try the Glowing Lotus Blossom Bucket with popcorn, or the Glowing Stein or Lotus Flower Glow Cube if you’re in the mood for a beverage.

Rivers of Light is a relatively new show, so it tends to be pretty popular.  It’s therefore a good idea to book a FastPass+, if you can.  If you don’t have one, you’ll have to wait in the standby line, which people have been known to wait in for hours.  If you do have a FastPass+, you won’t have an assigned seat, but you’ll be guaranteed a seat (up until about 5-10 minutes before the show) in the reserved section of the amphitheater.  You’ll still want to show up early (15-35 minutes, at least), especially if you’re picky about your seats – and you can still expect to stand in a line with other FastPass+ holders, but it’ll be much shorter than the standby line and you can rest assured that you’ll have seats.

FastPasses+ for Rivers of Light can be difficult to snag, but fear not!  A good alternative to a FastPass+ for the show is to purchase a Rivers of Light Dining Package.  Along with reserved seating at Rivers of Light, the package includes a meal at your choice of two Animal Kingdom restaurants: Tiffins or Tusker House.  Just make sure that if you’re eating dinner, rather than breakfast or lunch, your reservation time gives you plenty of time to eat and make it to the show (2 ½ hours before showtime for Tusker House; 3 hours before showtime for Tiffins).

There are now two daily showings of Rivers of Light (check online to confirm show times the day you plan to attend, of course), one at 8:45 pm, and one at 10 pm.  So if you don’t have any FastPasses+ left or can’t snag one for the show, you can always aim for the later show, which shouldn’t be as crowded as the early show.  Keep in mind that there are half as many seats here as there are for Fantasmic, but Animal Kingdom sees more traffic than Hollywood Studios.  So the earlier you can arrive to get in the standby line, the better!

We know that Disney Imagineers travelled across the globe for inspiration for this part of Animal Kingdom, bringing back artifacts and stories with them to use in the creation of the park’s Asia section.  So it’s no surprise that this attention to detail and authenticity is also found throughout Rivers of Light.  Prayer flags, lanterns and bells are common in mountain villages in Nepal, and the stacked stones were inspired by similar tiers at the sacred Pashupatinath Temple. The lotus flower is an important symbol throughout Asia, and if you look closely at the doorways to the amphitheatre, you’ll see Asian-inspired icons protecting dwellers from evil spirits.

Disney has always made the safety and comfort of the animals at Walt Disney World’s Animal Kingdom a priority.  So even though no fireworks were to be used in Rivers of Light, every precaution was taken to make sure the animals in the park wouldn’t be disturbed by the new show.  The soundtrack for Rivers of Light was actually played for the animals, backstage where they sleep at night, to get them used to the music, sound effects and audience noise that they would hear once the show opened – for months, before Rivers of Light opened!

1. Know Before You Go

At 15 minutes long, Rivers of Light definitely isn’t a long show.  But be aware that there’s a beautiful pre-show that starts about 15 minutes before the show, so you’ll want to be seated for that if at all possible.  Imagineers have designed Rivers of Light to run in inclement weather (so if it rains, don’t assume the show will be cancelled), but if lightning is observed in the vicinity, the show will be cancelled.  If this happens and you have a Dining Package, you’ll be able to return to see the show within five days of the cancelled show.