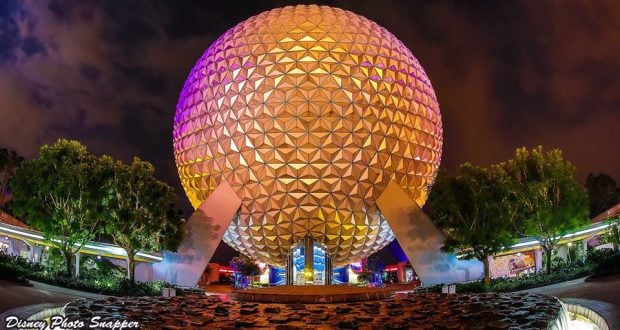 If you didn’t know any better, you might think Spaceship Earth is just that great big golf ball that sits near the front gates of Epcot. But of course Disney fans know Spaceship Earth has nothing to do with golf, and that giant sphere is so much more than just a visual icon of the park, it’s also a thematic icon of Epcot. It represents technological advancement, innovation and discovery. It houses an attraction that takes guests on a journey back in time and retraces the history of communication from cavemen to present day. Spaceship Earth is one of the most recognizable images in all of Disney World. Here are 10 facts about Spaceship Earth at Epcot.

We’ve established that Spaceship Earth isn’t a giant golf ball, so what is it? It is an 18 story geodesic sphere that is made up of 11,324 triangular panels. It is 165 feet wide, and takes up 2.2 million cubic feet in the park. Spaceship Earth weighs 16 million pounds, and took 26 months to build.

The sphere is held in place by six legs. In order to hold Spaceship Earth in place, the legs had to be driven 160 feet into the ground.

The hidden backstage sections and corridors inside Spaceship Earth are apparently so complicated because of the shape of the building and the ride within the sphere, that cast members have been known to draw pencil lines on the walls so they can find their way back through the sphere!

Spaceship Earth is actually made up of two spheres. The inner sphere is sealed in a thick rubber blanket for protection. The outer sphere is the one visible to guests and is made of an aluminum alloy.

2. Shelter from the Rain

As we all know it rains a lot in Florida, and Spaceship Earth is a great place to take refuge from the rain if you’re near the attraction. Here’s why it’s such a good place to take cover during a rainstorm. Hidden behind the triangles are gutters that collect all the rainwater, so water doesn’t really drip and fall off Spaceship Earth. From the gutters, the water flows down the six legs of the sphere and into the World Showcase Lagoon.

If you look closely at some of the faces of the Audio-Animatronic figures throughout Spaceship Earth, you may notice that some of them look very familiar. Imagineers used many of the face molds from the Hall of Presidents when making the faces for the Audio-Animatronics for the scenes in Spaceship Earth. The face of the Egyptian Priest in Spaceship Earth is that of William Taft, John Adams is the monk who is writing, Ulysses S. Grant is a sculptor and Teddy Roosevelt is the Roman senator. The face molds of the father and daughter from Carousel of Progress were also used in the Renaissance scene. These are just a few of the faces that appear in both attractions. If you look closely, you may recognize a few more along the way!