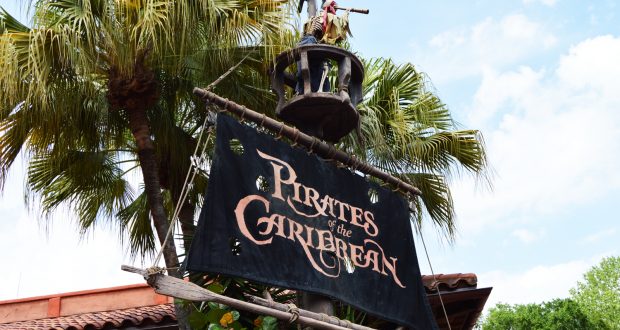 10 Facts About Pirates Of The Caribbean In The Magic Kingdom

Pirates of the Caribbean is one of Disney’s most classic and beloved attractions. It is located in Adventureland in the Magic Kingdom. Although Pirates of the Caribbean has undergone updates and changes over the years, including the addition of Captain Jack Sparrow from the films, at the heart of it, this attraction remains the same. Guests are taken back in time to a 17th century Spanish fortress right in the middle of the action as the pirates take over.

When Pirates of the Caribbean opened there were a couple of scenes where the pirates were chasing women, and the women could be heard giggling. As the years went on, this didn’t seem to fit with what was considered politically correct and the image Disney wanted to present, so they changed the scene. The scenes have changed a few times over the years, but now the women chase the men, and the men hold items of food, making the food the object they desire. The giggling sounds have also been removed. Similar politically correct changes were recently made to the Wench/Brides For Sale scene. Now the Redhead takes the roll of selling off stolen loot!

Some of you may remember the barker bird that was outside of the attraction. In 2006, the bird and the original attraction sign were taken away and replaced with the attraction name on a black sail and a skeleton up in the crow’s nest. The barker bird was an Audio-Animatronic green parrot wearing a hat with a skull and crossbones on it, and an eye patch. The barker bird is still out there though, he can be found in the Pirates section at The World of Disney in Disney Springs.

Animator, Imagineer and one of Disney’s Nine Old Men, Marc Davis was responsible for drawing such characters as Tinker Bell, Cinderella, Snow White, and Maleficent. But he didn’t only contribute to Disney films, but also to attractions, such as Pirates of the Caribbean. He is responsible for many of the sight gags throughout the ride. There’s even a few references to Davis throughout the attraction, most notably the coat of arms in the Treasure Room. The coat of arms reads ‘Marco Daviso’, and it is the coat of arms of Davis’ family.

When you float past the auction scene, pay close attention to the voice of the Auctioneer. The voice actor is Paul Frees, who is also the Ghost Host at The Haunted Mansion.

At the beginning of the ride, guests experience one big drop. This wasn’t done to add a thrill to the ride, although it does have that effect. The drop is there because Disney needed to move guests below the train tracks above. The drop couldn’t be any bigger though because of the high water table in that particular spot.

The battle between the fortress and the pirate ship is an exciting part of the attraction, with cannonballs being fired every which way. Obviously cannonballs cannot be used in the ride, so the effect is created with moving cannon barrels, flashes of light, and blasts from beneath the water to create a splash and give the impression that cannonballs are being fired into the water. More recently, Disney has added puffs of air to make it seem as if the cannons really are whizzing right by you.

3. The Face in the Waterfall

As guests begin their journey they come to a waterfall with a face amongst the water, warning them that danger lies ahead. This addition to the ride was inspired by the films, and the face has been both Davy Jones and Blackbeard. The face and the waterfall both disappear as the boat glides through, and this is because both the waterfall and the face are projected onto mist.

There is a bit of fantasy in the Pirates of the Caribbean, you just have to know where to look. There are mermaids in the attraction. When you first set out on Pirates, and you’re moving through the section where a storm is brewing and there are creepy skeletons all around, take note of one of the skeletons that has washed up on the shore. You’ll notice it’s not a regular skeleton, but one of a mermaid! And, if you peer into the water at just the right time, you may see flashes of light below the surface, those are also meant to be mermaids!