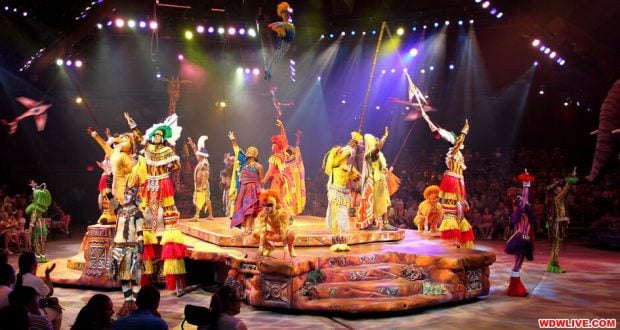 10 Facts and Secrets About Festival of the Lion King

Few entertainment options engage audiences as completely as Festival of the Lion King at Disney’s Animal Kingdom. The vivid characters, the amazing acrobatics, the elegant dancing, and the talented singers pull this show together and enthrall audiences every day. In celebration of one of the most beloved shows in Walt Disney World, we present ten facts and secrets about Festival of the Lion King.

Performing a summary of the movie plot comprises the Disney playbook for live shows based upon their popular films. The theme parks creatively retell the stories of Finding Nemo, Beauty and the Beast, and The Little Mermaid, to name a few. Festival of the Lion King stands apart from the rest, because instead of reenacting familiar scenes from The Lion King, it provides a completely original story featuring the film’s characters. The show produces a revue of diverse talent that’s colored by the Sub-Saharan theme of the movie.

Even though the Festival of the Lion King story is original, much of what you see is not. Actually, the warthog, giraffe, elephant and lion floats, along with other decorative items, costumes, and puppets, appeared in a parade known as The Lion King Celebration. The parade ran from 1994 to 1997 at Disneyland to promote and celebrate the film’s release. The opening of Disney’s Animal Kingdom in 1998 became the perfect opportunity to dust off the floats and repurpose them for what Imagineers planned to be a temporary show. However, park guests loved it so much that Disney decided to make it a permanent addition to the Animal Kingdom’s entertainment schedule.

Once you notice the signs labeled “Dream Builders” hanging from the construction barricades at Animal Kingdom, you know Disney Imagineers are up to something big. In this case, they’ve been building an entire land in the southwest section of the park since January of 2014. Pandora – The World of Avatar will replace the retired Camp Minnie-Mickey, the original home of Festival of the Lion King. The show closed right before construction began, but Disney relocated it to the Africa section of the park at Harambe Theater, which opened five months later.

7. Busting Out the Seams

The old theater in Camp Minnie-Mickey seated 1,375 guests, but Harambe Theater expanded accommodations to 1,500 because of the show’s increasing popularity. The production only runs for 30 minutes with seven to ten performances scheduled each day, depending upon the season. During most of the year, the audience packs the theater to capacity, so arriving 30 to 45 minutes in advance proves crucial for claiming a spot inside. Visiting during peak season may result in waiting for the next show if you don’t arrive early. Of course, using Fastpass+ to reserve your spot will not only guarantee your seat, but also provide you a better selection, as you will gain admittance before the general public.

Once the show begins, you’ll meet four singing performers who lead the festivities and represent the four animal sections of the audience. These main characters introduce themselves and share the meaning of their Swahili names with a bit of humor. The leading man calls himself Kiume (strong and manly), a younger man Nakawa (good-looking), and the two women Zawadi (the gift) and Kibibi (princess). These Swahili names represent each character’s personality throughout the show.

After introductions, the performers encourage the audience members to channel their inner wildness as they teach them to sound off with their assigned animal call. The audience joins either the Warthog, Giraffe, Elephant, or Lion teams, which are represented by Simba and Pumbaa, along with an unnamed giraffe and elephant. Kids and adults alike light up in laughter as they snort, bleat, roar, or trumpet like their mascot. The four singers then stir their teams into fierce competition to see which one can produce the most animal noise.

The fact that 50 cast members perform Festival of the Lion warrants their incredible wardrobe of 136 costumes. These colorful costumes reflect African-inspired designs for both human and animal characters alike. Imagine having to conduct daily maintenance on so many costumes full of performers’ sweat and riddled with loose stitching, feathers, horns, sequins, fur, and such. Ever wonder how many times a week a Tumble Monkey rips a seam? If small productions require a busy team to keep things from falling apart, then Disney must employ an army of cast members to manage this show’s wardrobe.

Everyone knows that Timon talks more than his fair share in The Lion King, but now he’s taken over Festival of the Lion King, as well. Timon has played a speaking part since the opening of the show, though it relied upon a voiceover track and a costumed character performing exaggerated motions. In 2009, Disney Imagineers improved Timon’s costume with animatronics, giving him the ability to blink and mouth the words he spoke and sang. The result is a more engaging, realistic meerkat that entertains all audiences.

One act in the show features an amazing fire dancer, who twirls, spins, tosses, and catches his blazing baton while moving to the rhythm of the drums upon a flaming stage. However, this isn’t the only fire Festival of the Lion King has experienced in recent history. In March of 2016, the Elephant’s float experienced an electrical fire, though staff members extinguished it immediately. The fire didn’t cause any injuries, but Disney evacuated the audience and cancelled the show until the following day. The remaining three floats continued to entertain guests while the smoking Elephant rested until repairs were completed and safety inspections passed.

The longevity of Festival of the Lion King testifies to its quality and positive reception from the millions of park visitors who return again and again to watch it. It’s the oldest show in Disney’s Animal Kingdom, even though Imagineers originally designated as a temporary attraction to draw guests to Camp Minnie-Mickey. The show’s popularity increased through the years, leading it to win the 2004 Disney Magazine Reader’s Choice Award for Favorite Walt Disney World Resort Show. The quality of this production prepared many members of its cast to successfully audition for parts on Broadway, and except for the fact that it’s a short performance, Festival of the Lion King even feels like a Broadway show.