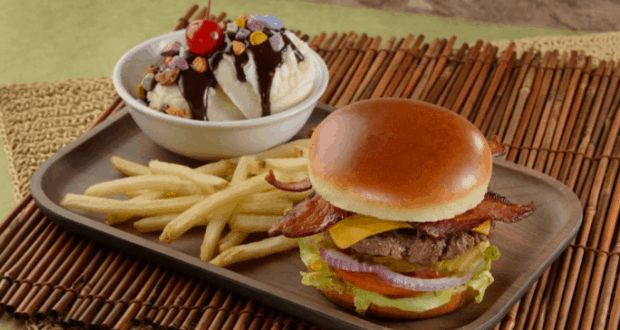 Disney does so many things well that it can often be challenging to pinpoint areas in need of improvement.  However, the kingdom that started with a mouse is not infallible, as demonstrated by the following eight quick service restaurants, which find themselves on this dubious list for a variety of reasons that we’ll explore below.

Located in the epicenter of Hollywood Studios, this dining space is meant to resemble the type of eatery found on studio backlots, where big name stars and elaborately-costumed extras can kick back and enjoy a respite from their workday.  A clever idea in theory, the ambiance of the space doesn’t scream Disney or Hollywood, aside from the framed posters for ABC series that line the walls and reek of synergistic advertising.  The restaurant shares a kitchen with the Sci-Fi Dine-In Theater, which is located right next door and offers both a more diverse menu and a more immersive experience than the bland Commissary.

Sonny Eclipse – an animatronic alien with no connection to the Disney universe – serves as the signature attraction at this longtime Tomorrowland staple, which features a rather standard amusement park menu that includes burgers, hot dogs, and chicken nuggets.  The lounge singer’s antics might entertain little ones, but adults will find his act cheesy and out of place, particularly in the shadow of Cinderella’s castle.  As a restaurant that welcomes visitors to the world of tomorrow, Cosmic Ray’s is lightyears beyond its expiration date and would benefit from an update that not only brings it into the next century but also captures some of the Disney magic the space is so sorely lacking.

Described as a “dino-themed dorm”, the space is large and inviting but its theming feels lazy and doesn’t live up to Disney standards.  The menu makes a valiant effort by venturing beyond the usual fare with entrees like the grilled chicken BLT and the spicy southwestern Impossible burger featuring a plant-based patty, but the food itself is often dry and overcooked.  For those who need something to tide them over while visiting Dinoland U.S.A., the hand-scooped ice cream cookie sandwiches at neighboring Dino-Bite Snacks may be a more appealing option.

Disney’s Beach Club resort is renowned for its spacious, sand bottom pool.  But, for a hotel that boasts arguably the most luxurious watering hole on property, its poolside bar leaves much to be desired when it comes to the menu.  The scant dining options consist of simple pub fare, as well as hummus, shrimp, and edamame, but the focus here is clearly on the beverage selection.  The plethora of specialty cocktails and fountain drinks may quench your thirst, but if you’re looking to satisfy your appetite the only quick service alternative is the Beach Club Marketplace, which is also one of the weaker dining spots of any Disney hotel and largely serves uninspiring premade items.

Set in the same space once occupied by Pizza Planet, this reimagining of a neighborhood pizza joint was met with high expectations.  However, instead of improving upon the uninspired menu offerings, Disney has relied on simply rebranding the space.  On that level, the transformation is a success, with themed rooms and outdoor dining having taken the place of Pizza Planet’s half-hearted attempt as an out-of-this-world arcade.  What could have been an opportunity to transform this restaurant into a worthy dining destination instead remains nothing more than a serviceable alternative if you’re unable to land a table at Mama Melrose’s, a far superior Italian eatery.

The Lunching Pad is another Tomorrowland eatery that fails to achieve liftoff.  Located beneath the PeopleMover, this quick service restaurant doesn’t amount to much more than a glorified snack cart, with a menu that consists primarily of hot dog variants.  The real draw here is the Space Ranger Slush, a colorful concoction served with an edible rock candy straw, though if that’s the only noteworthy menu item perhaps it’s time for mission control to go back to the drawing board.

The knock on this restaurant isn’t the quality of the food but, rather, the cost of a meal.  Those who aren’t taking advantage of the dining plan can expect to pay nearly as much here as in a sit down restaurant.  The appeal of the more varied menu – which includes options such as meatloaf, salmon, and rotisserie chicken – may be outweighed by the price tag for many families, particularly when there are so many other options at their disposal.

This poolside dining option loses points for being the sole quick service restaurant within the campground.  True, the trading posts stock a variety of groceries and Trail’s End does offer carryout, but the Meadow Snack Bar is the only place to grab a quick bite to eat within this largely isolated resort.  As such, guests are forced to make their selections from a menu that once again relies heavily on hot dogs and pizzas.  Boats from the campground ferry visitors to neighboring resorts that feature a wider variety of dining options, such as Wilderness Lodge and Contemporary, but such excursions wouldn’t be necessary if Fort Wilderness offered more extensive quick service dining.