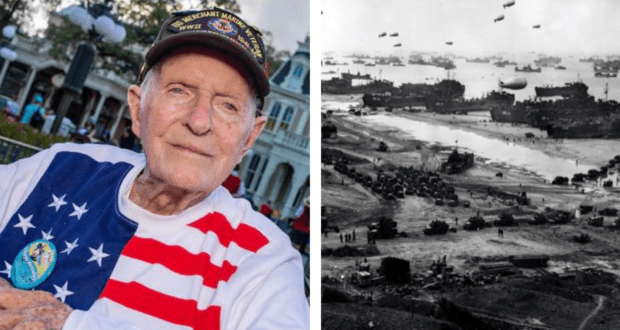 A World War II Veteran celebrated his 100th birthday at Magic Kingdom on Sunday, and Disney World honored him with a special ceremony at the end of the day, as well as a gift after the Magic Kingdom Flag Retreat. William McCroskey just celebrated his 100th birthday, but he wasn’t sticking with the usual cake, ice cream, and a party at the church with all his relatives. No way. He did what any young and savvy 100-year-old man would do on his big day; he went to Magic Kingdom! And what a celebration it was, thanks to his service in the United States Armed Forces during World War II, and Cast Members’ magical display of appreciation for his service.

McCroskey and his family/Credit: Disney Parks

McCroskey served as a Merchant Marine during World War II. Merchant Marines were truly the unsung heroes during the war effort. They acted as a supply line that made survival possible to members of the Allied Armies by providing just about anything those servicemen needed. On June 6, 1944, also known as D-Day, land, air, and sea forces from all of the Allied Armies came together as a force to be reckoned with, orchestrating the largest single invasion in all of human history.

The operation was known by its codename, OVERLORD, and involved five attacks from the waters onto the beaches of Normandy, France. The massive effort called on 7,000 ships and landing crafts filled with almost 200,000 servicemen from eight allied countries. Of those troops, close to 133,000 from England, the United States, and Canada set foot on the beaches on June 6, 1944, each and every one fully aware that he was stepping directly into enemy fire. More than 10,000 Allied troops perished during the invasion. The effort ultimately led to the defeat of the German Nazi army. 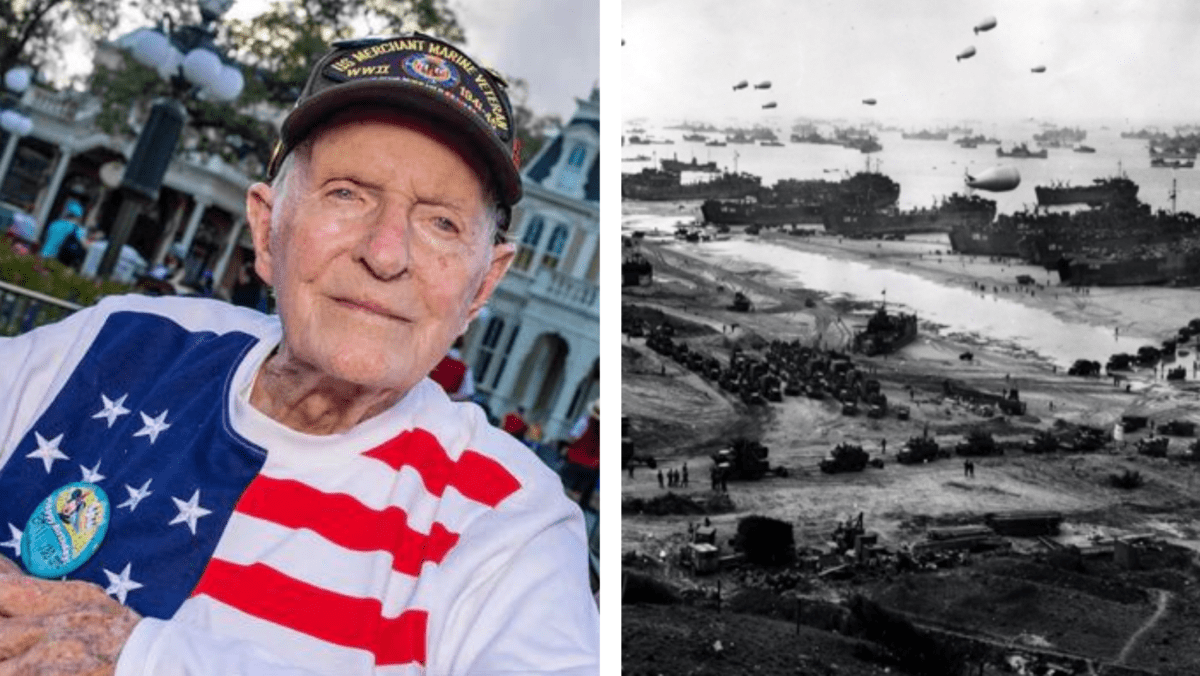 During the invasion, McCroskey served by helping to transport replacement troops to Normandy Beach. After the D-Day invasion, he helped to transport personnel and supplies to seaports all over the world, including many in Africa and Asia. According to Disney World, McCroskey visited almost every global seaport there was at the time. In 1945, when the war was finally over, McCroskey returned home to his young wife and began his family.

After spending the day enjoying Magic Kingdom, McCroskey was honored with a special ceremony carried out by Cast Members in the park and a fellow World War II Veteran.

The Magic Kingdom Flag Retreat took place as usual late Sunday afternoon, but this time, the United States flag that flew over Magic Kingdom that day went home with someone very deserving of the honor. Cast Members performed the 13 Folds of Glory ceremonial folding of the flag and placed it into a special shadow box. The box was then presented to McCroskey in honor of, and gratitude for, his brave service.

Here’s wishing Mr. McCroskey a very happy birthday, and we join the Cast Members of Walt Disney World in extending our heartfelt gratitude to him for his service to our nation.

2022-02-23
+Becky Burkett
Previous: Disney World Fans Are Not Happy With All The Disneyland Excitement
Next: Blatant Plagiarism? Disney Accused of Stealing Artist’s Work to Use For 50th Merchandise