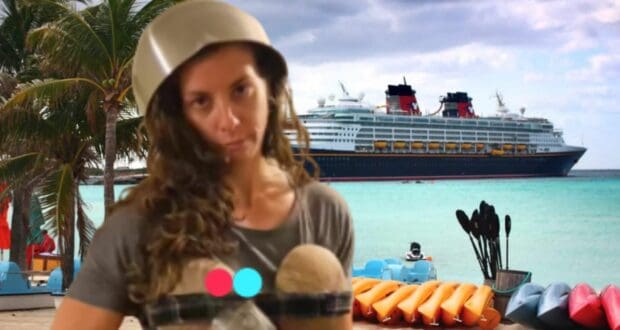 Wife is determined to set sail with Mickey and she’ll do whatever it takes, even if that means a rubber spatula, wire whisk and a bowl on her head!

Griff wants everyone to know what it’s like being married to a “Disney girl,” as if his Mickey Mouse t-shirt doesn’t already scream, “I’ve been indoctrinated in the ways of Disney fandom!”

this Girl has so many Disney Minnie ears…FYI – She makes these herself and it’s actually pretty impressive you ask me.

In the video, Griff shows followers five or six pairs of Mickey and Minnie ears, each of which his wife Alyssa has made by hand, which Griff says are, “actually pretty impressive if you ask me.” 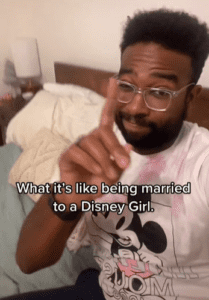 Griff and Alyssa share a TikTok account and go by the handle @griffandalyssa. They have nearly 80,000 followers, and so far, their videos have amassed almost 4 million likes.

They share videos about different things, but one thing is clear: Alyssa is a true Disney fan, and there’s a lot more to being married to a “Disney girl,” than meets the eye, as Griff found out when Alyssa began to bring up the idea of a Disney cruise, and she wasn’t going to give up. In fact, Alyssa wasn’t going to stop asking until she got what she wanted, and it doesn’t seem like there was too much Alyssa wouldn’t do in order to score her coveted Disney cruise. She’s got her eyes on the prize, Griff. Eyes on the prize! 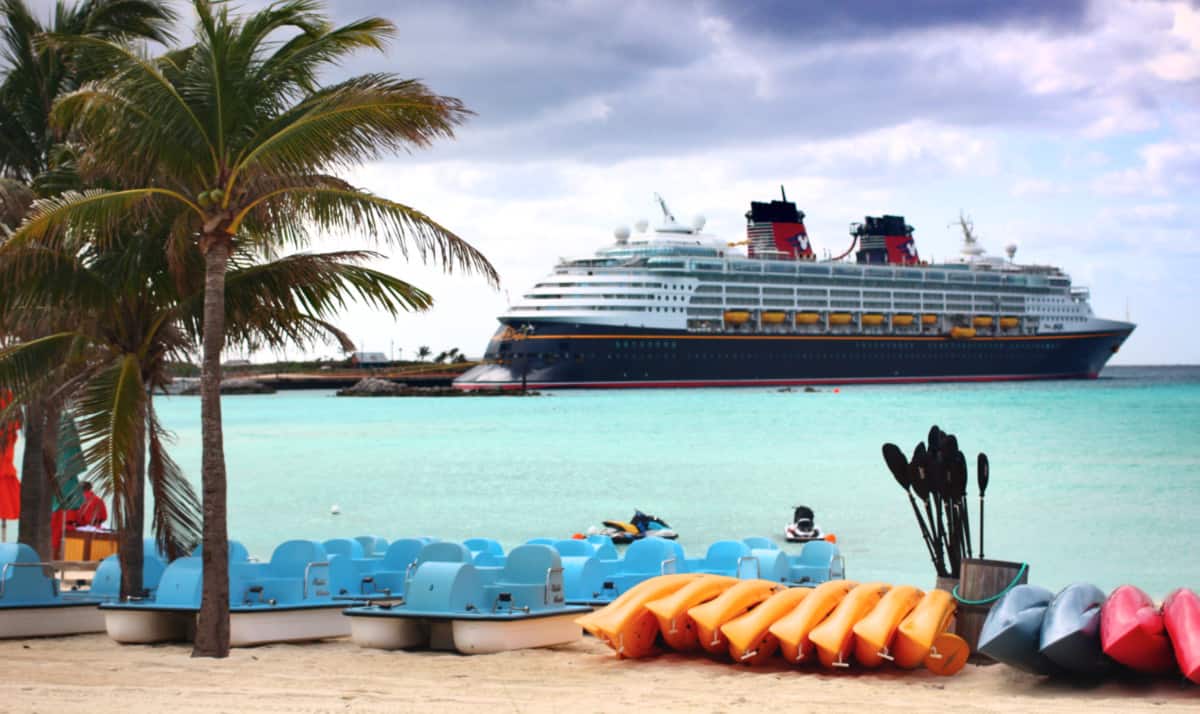 But Griff seemingly had his eyes on the prize as well because unbeknownst to Alyssa, Griff purchased Disney Cruise Line tickets months before he began teasing and pranking his wife about the sheer impossibility of a cruise with Mickey aboard the Disney Dream, the Disney Magic, the Disney Wonder or the Disney Fantasy. Cue the maniacal laugh.

RELATED: Parents of toddler sue Disney over alleged sexual assault of their daughter aboard the Disney Fantasy

Her phone is broken atm so she doesn’t even know I posted this haha … don’t tag her tho…chill & be cool about it. #disneycruise #disneyworld #fyp

Yep, Griff had something amazing up his sleeve the whole time–or maybe it was something sinister. That maniacal laugh had us wondering until we read the caption above that maniacal laughter. But did Griff blow his cover with the post to the couple’s shared TikTok account? Griff says no–not to worry, and he tells followers to relax because he was able to post the video revealing his previous ticket purchase to TikTok without Alyssa knowing since her phone was broken at the time.

So, Griff surprised Alyssa by telling her he bought the tickets and that she no longer has to beg to go on a cruise. The end. Right?

Griff’s not the kind of guy to give up so easily. He seems more like the kind of guy who feels an insatiable desire to see a prank through. All the way through. We get the feeling that he must have been raised to always finish what he starts because he wasn’t nearly finished with his plan to surprise his wife with her dream vacation. But that dream vacation would come at a cost for the unsuspecting Alyssa.

What was next up Griff’s sleeve? Well, for starters, even though he already had the Disney Cruise Line tickets in his pocket, there’s no way he was going to tell Alyssa yet. In fact, he had every intention of making her work for her cruise–her vacation of a lifetime. And he wasn’t going to make it easy for her.

Or so he thought.

“My husband said if this video gets 1 million views, he’ll take me on a Disney Cruise,” Alyssa captioned a video that she posted online. 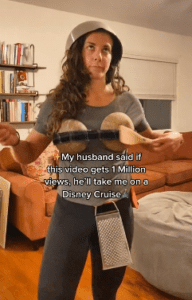 In the video, poor Alyssa dons a mixing bowl on her head and wears a cheese grater attached to a belt in the front and a saucepan over her backside, also attached to the belt. She uses a wooden spatula and a wire whisk to play all the instruments attached or affixed to her body in some way, including the small mixing bowls Alyssa has “strategically placed” on her torso.

It is hysterical to watch, but in between the laughter, we find ourselves thinking, “just give the poor girl her cruise tickets, man!”

Alyssa titles the video, “The things I do for the magic,” and clearly, she’s willing to do the unconventional to hit the high seas with Mickey and the gang.

We love the humor, comedy and comradery that are clearly part of the relationship between Griff and Alyssa, and we hope they have a blast on their Disney cruise! It might just make a “Disney guy” out of Griff!