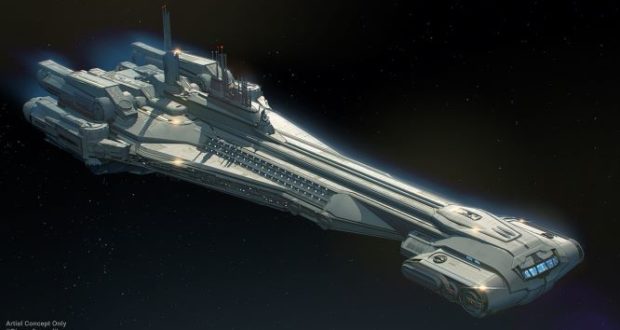 For a while now, fans of Star Wars and the Walt Disney World Resort in Florida have been looking forward to an all-new truly immersive experience that promises new out-of-this-world fun for the whole family. If you and yours are Star Wars fans, you’ll want to begin counting down the days to the opening of Star Wars: Galactic Starcruiser—an exciting, one-of-a-kind Disney resort-style experience that will incorporate the Star Wars universe and Disney’s Hollywood Studios’ very own Star Wars: Galaxy’s Edge. Here’s what we know so far.

The idea for the Star Wars: Galactic Starcruiser experience was tested on Guests years ago when Disney employed the efforts of survey company Swagbucks. Via Swagbucks, Disney was able to gauge Guests’ potential interest in such a concept and found that the interest was significant. (We aren’t surprised; were you?)

Plans for the Star Wars-themed hotel were originally unveiled at the 2017 D23 Expo, and during the 2019 D23 Expo, Disney unveiled even more details about the all-new experience.

8. Counting Down the Days

In December of 2019, Walt Disney Imagineering announced that the Galactic Starcruiser would open to Star Wars fans of all ages in 2021. Are you counting down the days yet?

8. Unlike Any Other Hotel

The all-new immersive experience will be one unlike any other hotel at the Walt Disney World Resort so far. Bob Chapek, now Chairman and CEO of the Walt Disney Company, said the Galactic Starcruiser will be the “most experiential concept ever” and that it will be 100% immersive and “will culminate in a unique journey for every person who visits.”

Guests of the Galactic Starcruiser will be able to travel directly from the resort hotel to Star Wars: Galaxy’s Edge.

Guests who book a stay aboard Star Wars: Galactic Starcruiser will have a two-night minimum stay. The exciting experience will also include a cruise-style itinerary. During their stay, Guests will have the opportunity to become key players in their very own Star Wars adventures.

Guests will be able to arrive at the Galactic Starcruiser via Disney transportation, their own personal vehicles or even by landspeeder. (Landspeeder?) Regardless of how Guests get to the Starcruiser, curb-side check-in will get Guests off on their adventure as quickly as possible.

From the terminal, Guests will enter a launch pod to travel to the Halcyon, the Starcruiser in the famous galaxy far, far away.

One of the Starcruiser’s “spaceports of call” will be Black Spire Outpost where special passenger transports accompany Guests to the planet of Batuu, which has been made wildly popular by the all-new Star Wars: Galaxy’s Edge at Disney’s Hollywood Studios.

The Galactic Starcruiser will fall under the category of Deluxe Resorts at Walt Disney World and will keep Guests immersed in their very own Star Wars adventure. It will be like a hotel and a cruise combined. There’s not a moment Guests of the Galactic Starcruiser and the planet Batuu won’t be participating in and living out their Star Wars-themed stories. We can’t wait!