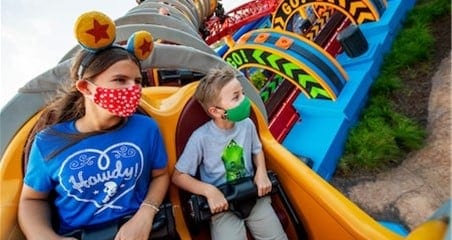 What Disney’s Hollywood Studios Looks Like With the Updated Guidelines

In the 11 months since Walt Disney World reopened we have seen a lot of changes. Some things are slowly starting to switch back. On June 9 my daughter and I had reservations for Disney’s Hollywood Studios. We’ve both been to the other theme parks since the regulations have relaxed somewhat, but this was our first time in a few weeks at my favorite of the four Walt Disney World theme parks.

The changes started as soon as we pulled into the parking lot. They are no longer staggering parking at Walt Disney World. That is something that I hoped that they would continue to do. I liked that I didn’t have to worry about the people in the car next to me opening their car doors and not letting us out. Staggered parking was easier, and I hope that someone from Disney eventually decides to bring it back.

The next change of course is that temperature check is gone. The tents aren’t there any longer. The social distancing markers that were on the ground for temperature check have all been taken up. Last summer I got stopped at temperature check once, not because I had a fever but because the Florida sun was beating down on my forehead while I waited in line. (I passed five minutes later.) I’m not going to miss this one.

Bag check is much simpler now as well. I’ve noticed that it’s sometimes easier to get through with a small bag than a packed backpack. If I do have a backpack with a lot of stuff, I’ll put everything inside in plastic zipper bags. That makes it easier to take out if security wants to see what’s in my bag, and it’s easier to keep everything organized as well.

Face coverings are no longer required in most outdoor areas at Walt Disney World. They are required indoors and while in line. When we would get in line for a ride the Cast Members would tell guests when they needed to put them on.

There are still social distancing markers on the ground for the rides, but no one seemed to follow them anymore. The Cast Members in the queues weren’t reminding people to stay apart. In one line the woman behind me walked into me several times. This was both indoors and outdoors.

Rows that were previously left empty on some rides were now occupied. All five rows were used on Star Tours – The Adventures Continue. The dividers were gone in the ride’s rows. A Cast Member told groups to keep an empty seat in between parties. All rows were filled on Slinky Dog Dash, but not all seats.

The main reason we wanted to visit Disney’s Hollywood Studios was because we snagged a Boarding Group for Star Wars: Rise of the Resistance. We had ridden a couple of times since the park reopened last July, and I had heard that some things had changed again and I wanted to see how it was all being handled.

When our group was called we got in line and had our MagicBands scanned. This was also where people were instructed to put on their face coverings and keep them on until the end of the ride. Of course there were plenty of people who didn’t follow this rule. After our group was called the line for the ride was the longest I’ve seen it. It took at least 45 minutes to get to the first part of the actual ride. That’s not a complaint. Some rides are worth waiting for, and the queue for Rise of the Resistance is incredible.

I was surprised by what happened when we went into that first room. We were instructed to make room for others so that more people could enter. The numbers or colored circles on the floor were no longer there, and there were no dividers. While it wasn’t crowded, it was the closest that I’ve been to other people at Walt Disney World in over a year.

After that first room everyone headed outside. There were no markers on the ground, and no one was told to keep their distance from each other. We then went into the shuttle. It wasn’t as packed as when the ride first opened in 2019, but it was far more people than I’ve seen in the shuttle since everything reopened. Most of the dividers were gone, although there were still some in the middle.

Once we boarded the Star Destroyer things changed a bit. There was still a plexiglass divider down the middle before you’re told where to wait for interrogation. First Order Officers told everyone which color to stand on, and that was your color inside the cell and also for the ride vehicle. (Colors have always been used here.) The divider was still there between the two rows of seats, and they were not combining parties in the same row. Everything else was the same. It’s a great ride.

I was curious about how things were being handled with Mickey & Minnie’s Runaway Railway, but the wait was long and that line is in the sun. If the line continues outside I might not ride it again until fall, because standing in the Florida sun during the summer months is not my idea of a good time.

We also went into a couple of the stores in the front of the park. The ones that we went into still had clearly marked entrances and exits. A Cast Member was at the door to remind people that masks are required indoors. Capacity in the stores is still limited as well. There were markers on the floor for the lines to the check out.

Disney’s Hollywood Studios felt busy, but not packed. I’ve seen it much more crowded. Before we left home I checked the Availability Calendar and all of the reservations were gone for the day, so it was at whatever the current capacity is.

There was a lot that we didn’t do today. Since we’re local, we tend to just go for a couple of hours a visit during the summer months. Still, we were able to get a good idea of what the most recent changes look like. Each change is one step closer to feeling some semblance of “normal” once again.