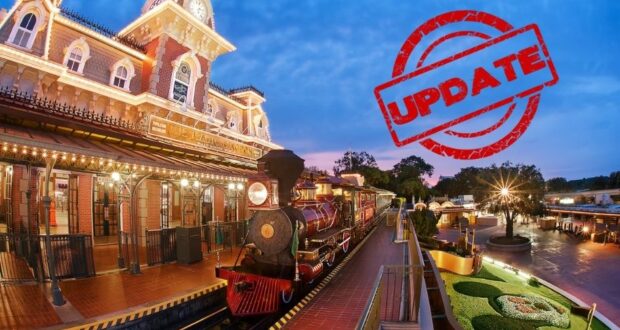 It’s crazy to think, but the beloved Walt Disney World Railroad at Magic Kingdom Park has been closed since December 3, 2018. The train attraction closed to make way for the construction of the highly-anticipated TRON Lightcylce Run attraction in the Tomorrowland portion of Magic Kingdom.

With COVID closures and construction delays, the TRON coaster has taken years to build – longer than it even took to build Magic Kingdom itself. Because of the delays, the Walt Disney World Railroad has been temporarily closed for over 41 months now.

Thankfully, we have seen massive progress on TRON Lightcycle Run with Disney even recently sharing a video of the coaster running its track at full speed. But, what’s the word on the Walt Disney Railroad?

It wasn’t too long ago that Walt Disney World Resort teased that Walt’s beloved steam engines would be welcoming Guests soon, but a train can’t run without a track!

The locomotive consists of three stations including Main Street, U.S.A. train station, the Frontierland station, and the Fantasyland station as it completes its 20-minute, 1.5-mile scenic round-trip tour around Magic Kingdom Park. With the track missing and needing to be re-routed due to the TRON coaster, it’s been a long wait.

FINALLY, however, we are seeing progress!

@bioreconstruct posted on May 7, 2022 “No changes yet to steam train track at Tomorrowland.” BUT – on May 14, 2022, he updated social media with a new photo and the post, “Starting to replace steam train tracks between Tomorrowland and Storybook Circus. Crushed stone is in a nearby car. Rails are raised in preparation for ties. Concrete area is the Space Mountain queue tunnel.”

Check out the differences in the photos below:

It may be small, but it’s an excellent step forward, and at this point, we will take whatever we can get! Thanks for the update @bioreconstruct.

2022-05-16
Jamie Sylvester
Previous: Disney Is Donating 100% Of Profits From Its Pride Collection to LGBTQIA+ Support Organizations
Next: Jerry Bruckheimer Makes Statement On Johnny Depp Returning to ‘Pirates’ Franchise – Admits Two Scripts Are In the Works