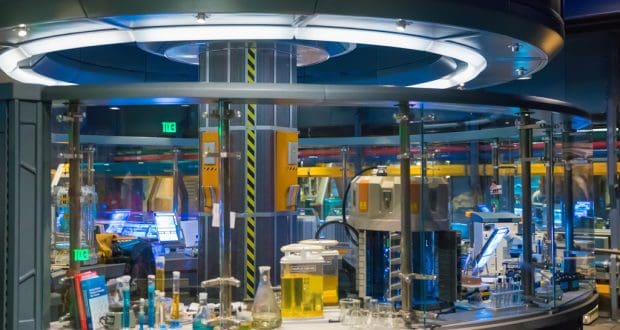 I don’t know about you, but I love a good story: whether that be in film, on stage or even in a ride. Disney is famous for their amazing, beautifully crafted tales and their rides are no exception. Rides that simply go up and down and spin you around are very fun, I’ll admit it, but that’s it: there’s nothing deeper to them. Disney allows their guests to get fully immersed in the rides through the incredible stories that embody them.

Second line to the right and straight on til FastPasses. Seriously though, while Peter Pan’s Flight usually has a ridiculously long line, its story line is super cute! I admit the ride is a bit simplistic and the entire point of it is to tell the story, but what makes it special is how the story is played out. Getting on a “pirate ship” that has promised to take you on one of Peter’s adventures is a little enticing, don’t you think? With a little help from Tinker Bell, your ship soars over Neverland and London. Peering over the side of the ship, you can see Tiger Lilly and her tribe and Captain Hook, Smee and the gang aboard the Jolly Roger.

Anyone looking to be the 1,000th guest at the Mansion? From the moment you get into your doom buggy, you are a part of the Haunted Mansion story. Residing in the Mansion are 999 grim grinning ghosts who would love for you to join them, as the creepy narrator points out. Disney certainly didn’t skimp out on detail; between the cobwebs, creaks and critters, it’s easy to believe you’re involved in something haunted. The cast members definitely add to the experience, as they are complete actors, making sure they never break character. Your Doom Buggy takes you through the ghostly halls where there is always a slight chill passing you by. This eerie ride is all about getting you sucked into the story and maybe even getting you to stay!

8. The Seas with Nemo and Friends

This ride takes you to the big blue world with Nemo and all his friends. Located in the heart of The Seas, this adorable ride lets you hang ten for the adventure of a lifetime. The queue of the ride brings you below the surface making you feel like you’re completely underwater and the immersion doesn’t stop there. Traveling in your clammobile, you will follow the story of Finding Nemo from the jelly attack to cruising the EAC with Crush. You will pass by real tanks from The Seas and you might even spot Dory or Bruce or one of the crew swimming in there. It’s really impossible to not feel a part of the story in this ride. Make sure to look out for Peach at the end; she would love to leave the ride with you and crack a couple jokes along the way!

7. Under the Sea ~ Journey of The Little Mermaid

The Voyage of the Little Mermaid show in Hollywood Studios is cute but let’s face it: that story could have really been told better and that’s what this new ride does. After winding your way around the amazing queue that already makes you feel like you’re in a cave with Scuttle, you hop in a clam mobile (yes, the very same from the Nemo ride) and start your journey. In the beginning, your clam tilts back and takes you “under the sea” and into the story. You travel through Ariel’s story with her and the rest of the gang, from singing with Sebastian to floating in a blue lagoon. You’re sure to have a great time, because it’s always better down where it’s wetter, after all.

Everybody’s got a laughing place! This adorable ride takes you through the Song of the South in music and, of course, laughter. You travel by log around Br’er Rabbit’s adventures like escaping Br’er Fox and Br’er Bear. You’ll float through caves and past meadows while singing a happy little tune that will be sure to be stuck in your head for at least a week. Br’er Rabbit’s story becomes your story with no easy way out. The major plot twist of the ride comes at the end, where you become part of a very wet cliffhanger.

Avatar Flight of Passage is one of the two attractions located in the new Pandora – The World of Avatar area within Disney’s Animal Kingdom. Prepare to straddle what feels somewhat like one of those motorcycles at an arcade, be secured in, and then using 3D screen technology, awesome 4D effects, and motion simulation – feel like you are literally flying on the back of a mountain banshee in the most exhilarating way. Your banshee (somewhat like a flying dragon) will soar through the sky as it takes you on the ride of a lifetime through Pandora – The World of Avatar. The storyline is well done with debriefing visitors what to expect as they are linked to an Avatar so they can then ride a banshee. It truly feels like you too are in the movie, Avatar!

Checking in? This hotel might not be exactly what you’d expect when it comes to a five star rating. Donned in cobwebs and dust, the hotel is not lacking in story detail. The less than pleasant hotel employees make the perfect actors, convincing everyone that they are about to check in to one heck of a time. You and your fellow guests are led to the basement where you board the elevator. Granted this is kind of where the story ends, after you plummet several feet, that is. The design and cast participation are really the heart of this ride and its plot. The exposition is great, but the end is the real jaw-dropper…

Dream on! This ride is more than just going zero to sixty with corkscrews along the way. While touring Aerosmith’s recording studio, their manager announces that the band is late for their concert! They have to hurry to get there on time and you’re invited for the ride of a lifetime. Once you hop in the stretch limo, you’re off-tumbling through the night in Los Angeles to the soundtrack of your favorite Aerosmith songs. While this is clearly more of a thrill ride, the design and music entrap you in this rockin’ story.

May the story be with you! Star Tours is just cool to begin with, but what I really love about it now, after the redo, is that each time you ride the story changes.  You and your family are passengers on a Starspeeder 1000 that can take you anywhere in the galaxy. Unfortunately, C3-PO and R2-D2 take the wheel and chaos ensues. You never know where you’ll end up or who you’ll run into, like Princess Leia, Darth Vader or even Yoda. There are over 50 story combinations to keep you on an unforgettable adventure. With special 3D effects and amazing graphics, you are easily sucked into the world of Star Wars.

Pilot? Commander? Navigator? Engineer? We are go for launch. Here’s a ride that is out of this world-okay, how cheesy was that? Seriously though, this ride completely draws its passengers into the story. Whether you choose the intense or less intense version of the ride, you are in on the action. You enter through NASA’s training center and get the low-down from Gary Sinise who coaches you through the entire process. Divided into teams, you and your crew travel through the center to your rocket-well, flight simulator. You climb into your X-2 Deep Space Shuttle and get familiar with the rocket and the assignments you will be responsible for, such as activating hypersleep or initiating rocket thrusters. You might also need to take over manual controls if something should go wrong…