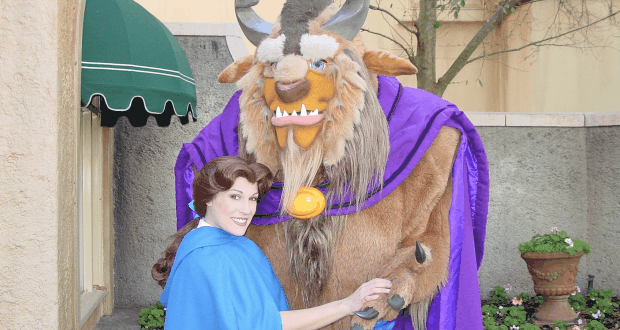 In 2010 the largest expansion in Magic Kingdom history was announced at Walt Disney World. The following February Mickey’s Toontown Fair was closed to make way for New Fantasyland. The ride Snow White’s Scary Adventures was also a victim of the expansion, closing in May 2012. New Fantasyland has opened in stages.

10) What are the different areas in Fantasyland?

There are three main sections to Fantasyland. The original Fantasyland is still there, with classics such as It’s a Small World and Mad Tea Party. The first section of New Fantasyland to open was Storybook Circus. The circus theme is evident, and it is the new home to Dumbo the Flying Elephant and The Barnstormer. The newest section of Fantasyland is Enchanted Forest. It is based on the Disney classics Beauty and the Beast and The Little Mermaid.

9) Where can I buy souvenirs in New Fantasyland?

The best place to buy souvenirs in New Fantasyland is Big Top Souvenirs in Storybook Circus. It has a fun theme and a wide variety of items. You can find candy, T-shirts, pins, kitchen items, and plenty of other things in the store. You might also want to check out Bonjour! Village Gifts in Enchanted Forest. It’s a much smaller store and it features elegant dinnerware and Beauty and the Beast themed T-shirts.

8) Where are the cinnamon rolls?

When Main Street Bakery was transformed into a Starbucks they stopped selling the cinnamon rolls, even though they were a guest favorite. You can now buy them in Gaston’s Tavern, which is located in Enchanted Forest. Look for the giant statue of Gaston and head behind it. While you’re there try a cup of LeFou’s Brew. It’s the eatery’s signature beverage.

7) Are there clowns in Storybook Circus?

For a little while longer. The Storybook Circus Giggle Gang will perform daily (weather permitting) until September 27. Wowzer the Clown has already finished. The clowns were never intended to be a permanent part of New Fantasyland. There is no word on whether or not there will be more clowns in the future.

6) What is Enchanted Tales with Belle?

Enchanted Tales with Belle is a live interactive show that is also a character encounter. Guests have a chance to be a part of the action as Belle’s story is retold. A ll of the roles are easy and you won’t be forced to participate if you don’t want to. After the show is over, guests can take a picture with Belle. Preference is given to those who took part in the show. Before the show you’ll have a chance to see inside Belle’s cottage. You’ll feel like you stepped inside the movie.

5) Where can I grab a quick bite to eat?

The best place to grab something quickly is probably Gaston’s Tavern. In addition to the cinnamon rolls and LeFou’s Brew you can order items like Hummus and Chips or Roast Pork Shank. Remember that Enchanted Forest is quite popular and the line might be long during normal meal hours. Disney will often set up kiosks selling ice cream or popcorn and cold drinks in New Fantasyland on busy days. Be Our Guest Restaurant is open for counter service at lunchtime, but it is not where you will want to go if you are in a hurry.

4) What’s the deal with Be Our Guest Restaurant?

There are a couple of unique things about Be Our Guest Restaurant. If you dine at lunchtime it is a quick service restaurant that uses a touch screen terminal to place your order. Reservations are strongly suggested for dinner, which is full service. It is also the only place at the Magic Kingdom where beer and wine are served, the rest of the park is dry. The restaurant allows guests a chance to eat inside the Beast’s Castle. You can dine in one of three rooms from the movie; the Ballroom, the Library, or the West Wing. Be Our Guest Restaurant is incredibly popular and dinner reservations are not easy to obtain.

Long lines usually form for lunch. Disney has been experimenting with ways to cut down the lunchtime line. FastPass+ might be available for Disney Resort guests only, and a new standby system (similar to the old legacy FASTPASS) is sometimes used. Guests are given a paper ticket with a return time, which allows them to enjoy the park, instead of waiting in line.

3) Where can I find characters?

New Fantasyland has plenty of places for character greetings. Princess Fairytale Hall is located in the original Fantasyland where Snow White’s Scary Adventures used to be. You can meet Cinderella and a friend or Rapunzel and a friend there. You can also meet Merida at Fairytale Garden. In Storybook Circus head to Pete’s Silly Sideshow. There you’ll find Goofy, Donald, Minnie, and Daisy dressed as circus performers. The character greetings do not stop there. Enchanted Forest is the home of Ariel’s Grotto, where you can meet her in mermaid form. As already mentioned, you can meet Belle after her show is over. If you want a picture with Gaston, look for him outside of his tavern by his statue. You can also find Pooh and friends, Alice, Fairy Godmother, and Peter Pan and Wendy in the original Fantasyland.

2) What rides are in the new areas?

In Storybook Circus you’ll find The Barnstormer. It’s the same family roller coaster that used to be in Mickey’s Toontown Fair, but it’s been given a new theme. Storybook Circus is also the home of the new and improved Dumbo. There are now two carousels and the wait is out of the sun. The queue takes guests inside a circus tent where kids can play while they wait for their turn. You can also find the Casey Jr. Splash ‘N’ Soak Station there. It’s a water playground for the kids. Finally, there is a stop for the Walt Disney World Railroad in Storybook Circus. In Enchanted Forest you’ll find Under the Sea ~ Journey of The Little Mermaid. It’s a gentle ride that takes you into her story and features animation and audio-animatronics.

1) What is Seven Dwarfs Mine Train?

Seven Dwarfs Mine Train is the final piece of the Fantasyland expansion puzzle, so to speak. It is a family roller coaster based on Snow White and the Seven Dwarfs. The coaster is steel and uses new technology to make guests feel like they are riding in a mine cart. The ride slows down inside, allowing you to have a glimpse into the mine and see all seven dwarfs at work. The details are amazing. While it doesn’t offer the same type of thrill as larger coasters, it’s still a lot of fun. Guests must be at least 38 inches tall in order to ride.

2014-09-20
PaulaK
Previous: An Imagineer Tour of Be Our Guest Restaurant in New Fantasyland Walt Disney World
Next: Darth Vader Dances to “You Can’t Touch This”: Disney Star Wars Weekends 2009