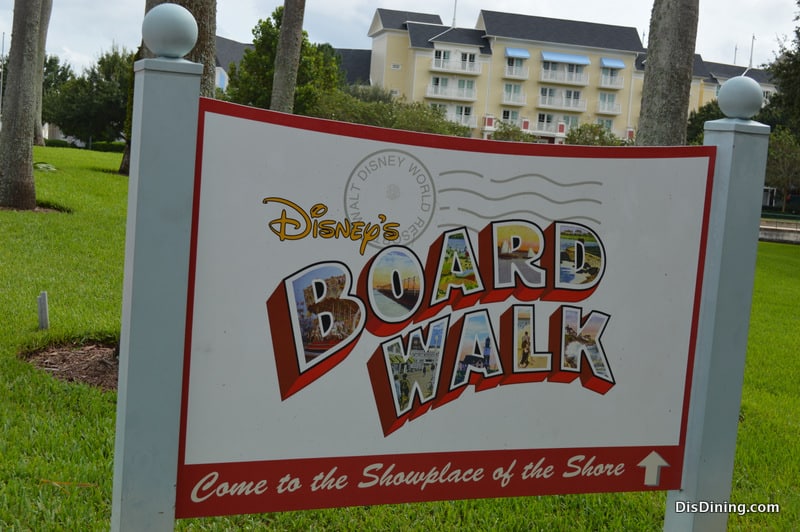 After a fun day in the parks you very well might be hungry. The question on your mind will then be where to grab a late night snack. You may be looking for something quick or you might want something more substantial, both of those are covered on this list. What is not covered is room service, which you will find at many of the Disney Resort Hotels.

Many of the food stands at the four Walt Disney World theme parks stay open until the park in question closes. Any of those will be a great place if you want to grab a snack on your way out. You might wait in line for a little while, since many other people will have the same idea, but that will cut down on the crowds boarding the tram or the bus.

I purposely stayed away from Disney’s Animal Kingdom with this list, they close too early for a snack to be considered “late night”. I did include one choice from each of the other three parks. The rest are places that are relatively easy to get to, grabbing something to tide you over until the morning shouldn’t be difficult.

There are food courts located in all of the resort hotel complexes. The food is fast and filling. A great variety is offered, you’re sure to find something that you will like. The closing times may vary but they are all open late, knowing that people returning from the parks will be hungry. While the different food courts do have different items you will usually find pizza, burgers, sandwiches, and healthy options. The food courts are also a great place for a quick breakfast in the morning.

At Rose & Crown you can eat either in the Dining Room or in the Pub. It is the Pub where you will want to grab your late night snack. They have a patio that offers an incredible view of IllumiNations. You’ll need to order something in order to sit there, you can’t just enjoy the show. The patio fills up quickly so head there early or make an 8:00 reservation (see above) for the Dining Room. The menu offers traditional British fare, things like Fish & Chips and Scotch Eggs. It is also a working pub, with the selection of ales and lagers that you would expect.

Now serving Starbucks, Main Street Bakery is still a Walt Disney World classic. Stop by after the fireworks to grab a smoothie or other caffeine-free drink (you’ll need your sleep after a long day) and a pastry or two. The choices change often and you’re sure to find something that will fulfill your late-night sweet tooth. Main Street Bakery stays open late so it’s a great place to pick up something to enjoy back at your hotel.

One of the many nice things about Disney’s BoardWalk Area is that it is close to both the World Showcase Entrance to Epcot and Disney’s Hollywood Studios. You can walk or catch a boat from either park and be there in a matter of minutes. If you’re looking for something quick to satisfy your late night cravings you can order pizza by the slice or by the pie at the Boardwalk Pizza Window. The selection is limited to cheese, pepperoni or veggie. They also sell cold drinks, beer and sangria. They are currently open from noon until midnight.

Step back in time into a 1950’s Havana nightclub and try something different for your late night snack. The full service restaurant is open until at least 11:00pm. The closing time for the Express Window next door varies but it is often open until midnight. There is a Desi Arnaz impersonator nightly and live bands on Fridays and Saturdays. You can choose from Cuban favorites such as Arroz con Pollo, which is a chicken dish served with rice, or Bistec de Sirloin, which is a grilled and seasoned sirloin steak. You might want to try making a later reservation to assure your table, visit http://disneyworld.disney.go.com/reservations/dining or call 407-WDW-DINE (407-939-3463) to do just that.

This is a working brewpub, the only one at Walt Disney World. Although it is a full service restaurant, reservations are not accepted. They are open until midnight, subject to change. Even though it is a brewery it is also family friendly. They have everything from steak to seafood. If you want a lighter snack there are several salads on the menu. You could jump right to dessert and order the Chocolate Confusion or the New York Cheesecake. Both indoor and outdoor seating is available, it’s a great place to sit and relax before heading back to the hotel.

What do you do when you’re hungry and bored at 3:00am? The answer is simple, you head to Disney’s Grand Floridian Resort and Spa! What sets Gasparilla Grill & Games above the other food court options at Walt Disney World is the fact that it is open 24 hours. Order a whole pizza or get an individual flatbread instead. Ham and turkey sandwiches are also available through the night, as well as Caesar or Side Salads. If you’re wide awake in the middle of the night use up some of that extra energy in the arcade. Gasparilla Grill & Games is currently closed for refurbishment but will reopen in December.

Often overlooked, Picabu’s deserves the top spot on this list because it is a fun, whimsical “buffeteria” that is open 24 hours a day. Although it sounds like it would be it is not all you can eat. Picabu (pronounced Peek-a-boo) is a character who appears several places throughout the restaurant. American foods such as pizza and hot dogs are served. There are grab and go sandwiches and also hot options. Not everything on the menu is offered all night long but you should be able to find a decent late night snack.