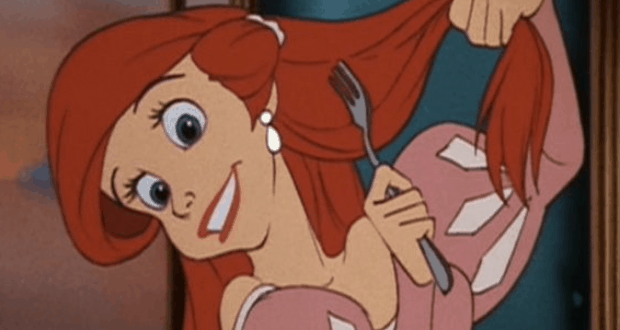 The amount of work, concentration and commitment that goes into making a movie or animated feature must be intense. The amount of hours it takes to get that one scene just right, or the accuracy of the painting, or now computer images, has to be spot on. But, even with all of the editing, detailing and sets of eyes on the final product, sometimes there are just mistakes. Other times, there are glitches or bloopers that were not thought through fully. This list is not for the intention of embarrassing the work of the people who worked so hard, but rather just to have a little fun to see if you can spot these errors the next time you watch one of these films!

Captain Hook and Smee have a captured Tiger Lily in their rowboat. With his short temper, Captain Hook ends up kicking the rowboat and the oars Smee was holding go flying. But, in the very next moment, Smee has the oars again. Something tells me Smee is just not that agile!

9. One Hundred and One Dalmatians

Throughout the film, keeping the leashes on Perdita and Pongo seems to be a tough task. In the beginning, Anita drops Perdita’s leash and it simply vanishes. Pongo has a similar incident when he falls in the pond. It seems to be genetic, as later in the movie, Lucky’s collar disappears. I’m so glad this phenomenon has never happened to one of my pugs!

Now, I am all about decency, but Prince John seems to lose his robe a lot and magically is wearing long underwear. When the robe is on, he has bare legs. He must have picked up those magic spray on underwear somewhere along the way! I guess Sir Hiss also has clothing issues, as he is usually wearing a cape…until Prince John ties him in a knot. Then, it simply vanishes!

Ariel and Eric have a quiet, but strange meal together. Ariel’s fork has a change in prongs, going from 3 to 4. Eric also loses his napkin mysteriously. The weirdest part of all of it is that Ariel has clearly watched people eat with forks by now, but still uses that dinglehopper to comb her hair. Maybe it just works better!

6. Beauty and the Beast

There are quite a few issues in Beast’s castle, though I’m not referring to the enchanted rose and curse on the beast. Chip is told to go to bed by Mrs. Potts and goes to his cabinet which has all cups in it, until we see it again soon after and it also houses plates. Lumiere must really have the “hots” for Belle, as he can’t decide whether to keep his candles lit when he kisses her hand. The footstool steals LeFou’s shoe, but he is seen right after with two shoes, so that didn’t quite work. Also, the castle goes from a mess to tidy to a mess pretty quickly. I guess the cleaning crew is working overtime.

Pacha has some issues with his clothing throughout the film. Unless he has a never-ending supply of t-shirts and ponchos, which I could totally buy into, his t-shirt changes colors magically. If he is wearing his poncho, his shirt seems brown until he takes the poncho off and he is wearing white. Kuzco also simply throws his poncho away in the middle of nowhere, but in the next scene Pacha is wearing it again. Resourceful. Kronk also has a pretty good moment explaining why he gave Kuzco the wrong elixir, stating that they all look the same. Later, they show Yzma’s elixirs and Kronk clearly does not understand the meaning of the word “same.”

4. Snow White and the Seven Dwarfs

Lanterns seem to be a problem through this feature, as they keep disappearing and reappearing throughout it! Same goes for the steps leading to the dwarf’s cottage, as they do seem to change in number each time you see it. Doors seem to appear and disappear, including the front door. When the dwarfs play tug of war, they yank the handle off the door, but it reappears soon after! I am quick to forgive these blunders, as it must have been quite a task to draw cell by cell through multiple animators to get everything right!

Wardrobe malfunctions are all over the place in this film. Geppetto can’t keep his night cap on and loses it frequently. Jiminy is a hot mess. He has troubles with a disappearing undershirt, patches that randomly show up on his clothes and somehow ruins his coat by putting a whole umbrella through it. But, the weird glitch in this film is when Pinocchio goes to Pleasure Island and starts transforming into a donkey. Though he is a wooden boy, he is turning into a real donkey. So, maybe he could have just become a real live donkey without the interventions of the Blue Fairy?

Giselle calls on all of her animal friends to help her when she is in NYC. What is weird is that she gets a lot of responses, except from the horses. Now, it may just be that they are on duty NYC police horses, but it seems weird that they don’t even flinch. Those are some pretty serious horses to overcome a magical summoning.

When Marshmallow is chasing Kristoff, Olaf and Anna off the cliff, Olaf goes over first, then Anna and finally Kristoff. Weirdly, Anna makes a snow mound, Kristoff is underneath a blanket of snow with any sense of him entering it and Olaf is on top of him. Physics just doesn’t work that way! Also, when Elsa finally realizes that love will end winter and things begin to thaw, it also stands to reason that her ice dress that she created for herself should melt right off. I guess some things are more frozen in Arendelle than others!

2014-10-20
Lauren Wallis
Previous: 7 Things You Can Buy At Disney For Less Than $5
Next: 9 Awesome Things For Teenagers At Walt Disney World