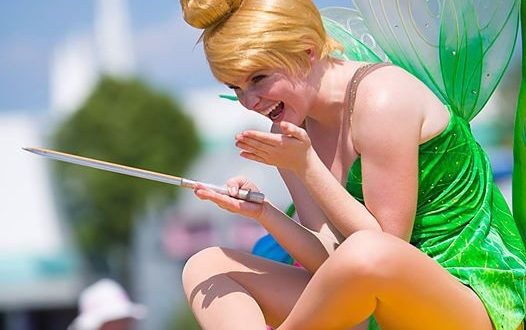 Let’s be honest: any job at Disney would be cool. And every job in the Parks is extremely important, but I think some are just a little bit cooler than others. These are all jobs that I wouldn’t necessarily like to have, but think are amazing!

9. Scuba Guys in the Seas

In the lobby of The Seas with Nemo & Friends in Epcot, there is a giant scuba tank that goes from the floor to the ceiling. Several times a day, a scuba demonstration is done here for everyone to see. Someone fully decked out in scuba gear, dives in this enclosure and gets to wave to the audience and interact with them. In another tank in the building, scuba divers get to swim with the dolphins and fish and play games with the audience members watching. It always looks so much fun!

The Indiana Jones Epic Stunt Spectacular is just that: epically spectacular. This show gives guests a behind the scenes look at how movies stunts (not involving cars) are done. I think that’s pretty cool in itself. But could you imagine being Indiana Jones all day? That performer gets to carry the whip, wear the hat and be chased by a giant boulder six times a day! Sallah, I said NO shows. That’s SIX shows; can’t you count?!

Have You Gotten The “Happily Ever After” song stuck in your head yet? Imagine how the fireworks launchers must feel. Regardless of the repetitive music, this definitely is a unique and cool job. It must be such a rush to set off that amazing spectacle and create magic for thousands of people every night.

I’ve always thought that being able to hang with the animals all day would be super fun. I’m sure that being a vet at Animal Kingdom would be cool, too. But the trainers that get to play and interact with the animals must have a great time. I would absolutely love to be the person who gets to be a part of the otters’ playtime!

I love these guys. In Magic Kingdom and Hollywood Studios, the Citizens take over Main Street and Hollywood Boulevard in a glamorous fashion. I often see these improv troupes when entering the parks and almost always get stopped with a greeting or snarky comment. The troupes add to the magic for me and it must be such a cool job to be able to interact with the guests in such a fun way.

4. Being a Face Character

This one might seem a little simplistic compared to the others, but I think it’s amazingly cool work. It’s those special cast members job to be a famous, beloved Disney character. They get to make guests’ whole trips by posing for pictures, signing their name, and being that character. Interacting with guests at all is cool, but face characters get to do so in a really special, magical way.

Scary? Probably. Cool? Unbelievably. Every night in Magic Kingdom, the fantastic Happily Ever After fireworks display is set off. Tinker Bell herself flies from the top of Cinderella Castle across the park! She’s all lit up (from her Pixie dust, of course) and is incredibly enthusiastic. Amazingly, it’s very easy to see her, even away from the park. When I watch Happily Ever After from the Polynesian Beach, I can still make out a tiny green dot floating down from the Castle. What an amazing view she must have from up there!

Could you imagine what it would be like to create a ride at Disney World? It’d be unbelievably cool to be an Imagineer. I think they ultimately capture the true message of Disney: to dream. They get to go nuts with creativity. Their job is Walt Disney’s famous quote: “If you can dream it, you can do it.” It must be incredibly cool to carry on his legacy.

I mean, come on. This one had to be at the top. Can you think of anything better than being completely in charge of all of Disney?! I’ll admit that this might be a little too much responsibility for my maturity level, so I’ll leave it up to Bob Iger. Being CEO of Disney means he’s in charge of all of the parks, the cruise line, the movies, the merchandise, the everything. That’s a big deal. And he has been doing a wonderful job, having just been named the USA’s top CEO by Chief Executive magazine. This job could be described much more articulately, I’m sure, but I’ll just leave it as extremely cool.

Yes, I know, PUSH was a trashcan. But the person who gave him life had such a cool job. While people swarmed to see the quirky robot who was often rambling or singing, there was always a man dressed in attire much too hot for Florida with one hand in a messenger bag and the other by his mouth. In the bag, he would control PUSH’s movements and with a hidden microphone, he would quietly talk for PUSH. Everyone loved PUSH and he was so fun and unexpected. RIP PUSH (and the talking palm tree found in Animal Kingdom).