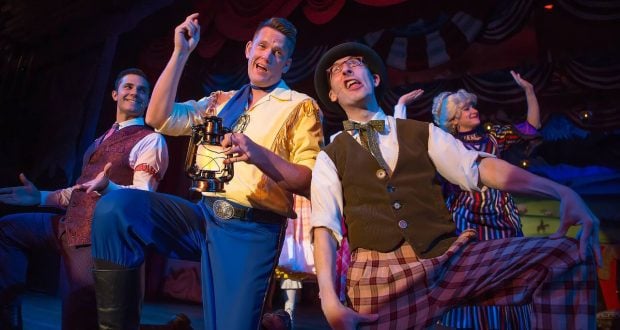 One of the things that Walt Disney World does so well (and that few other theme parks are able to replicate) is the immersion in a particular environment.  The Imagineers who designed each park and resort achieved this through the close attention to detail and the underlying story for each area.  But, all of the extras that go into it really make it believable to guests.  One of those extras is the live performances that you encounter throughout the World.  These could be scheduled attractions, “background” entertainment, or a performance you just happen upon.  They are musical, comical or a little of both.  There are many fantastic options for live performances at Walt Disney World, here are nine of our favorites:

If you find yourself in the lobby of the Grand Floridian Resort & Spa after a long, hot day at a theme park it is hard to believe that these two things exist in one bubble.  The opulent and luxurious nature of the lobby is perfectly complemented by the Grand Floridian Society Orchestra who plays from their balcony on the second floor.  From 4:00pm-10:00pm the orchestra plays ragtime, Dixie, traditional Jazz and Disney favorites.  Whether you are staying at the Grand Floridian, visiting for dinner, or just want an excuse to hang out in the lobby, the Orchestra is a wonderful treat to listen to—so grab a drink at Mizner’s and relax!

Obviously, the World Showcase has a lot to offer in the realm of live entertainment.  The young acrobats in China are always a great show, and I am amazed by their strength, flexibility and concentration.  The performance combines some dance with acrobatics, what I call “partner stunts,” and tumbling.  The show is a little long, but it involves several changes of performers and actions.  You will find their performances in Epcot’s Times Guide.

In the France Pavilion in Epcot there are daily shows of the balancing act, Serveur Amusant.  Featuring a waiter and chef just outside the entrance to Les Chefs de France, this act entertains the crowd with juggling, acrobatics, and an impressive chair stacking trick that makes me nervous every time I watch.  These shows are scheduled throughout the day—the park Times Guide will let you know when you can catch the show.

Found at Disney’s Hollywood Studios, the Streetmosphere characters fit the Studios theme of the Golden Age of Hollywood.  You may encounter an aspiring starlet, a big time director, or even the Hollywood police—all perfectly in character to interact with each other and guests visiting the parks.  These hilarious encounters make you feel even more a part of the “Hollywood of the Past” experience of the Studios.  The Streetmosphere characters can be found throughout the day on both Hollywood Boulevard and Sunset Boulevard.

A Main Street Tradition.  This Barbershop Quartet performs on Main Street USA in the Magic Kingdom.  They are hard to miss in their brightly colored costumes, and you won’t want to miss one of their performances.  They sing—Main Street favorites—do a little tap dancing, play chimes and incorporate some vaudeville type humor into their shows.  Seeing or hearing this group perform on Main Street definitely makes you feel as though you’ve stepped into a turn of the century town.

4. Beauty and the Beast – Live On Stage

A tale as old as time… and a remarkable one at that! Head over to Sunset Blvd at Hollywood Studios where you’ll find the Theater of the Stars. Be swept awesome in this romantic story of how Beauty and the Beast fell into love. This Broadway-style musical is an easy must-do at Hollywood Studios and include amazes live singing, storytelling, dancing, and numerous costume and scene changes.

3.  Festival of the Lion King

This show is one of my favorite Animal Kingdom attractions.  It incorporates fantastic music, a beloved story, daring tumble monkeys, fire dancing and an amazing aerial act.  And, it lets all of the guests take part in big and small ways.  All of my family enjoys this show—we sing along “A-wimoweh, a-wimoweh,” we laugh at the monkeys, we make our animal sounds . . . it’s all good Disney fun.

I do want to give a nod to the Animal Kingdom’s other live entertainment attractions here.  Finding Nemo the Musical is a beautiful and colorful show with puppetry and catchy music.

One word for you . . .energy.  Yee Haa Bob has more energy than my two year old!  His hilarious show takes place at the River Roost Lounge at Port Orleans Riverside on select nights during the week.  It is family friendly, so no worries about taking the kids—just get there early because he is extremely popular.  Also, expect to be incorporated into the show in some form or fashion.  Yee Haa Bob is an all-around entertainer:  singer, piano player & comedian.  Even if you are not staying at Riverside it is worth the trip over to watch (or participate in) one of his shows.  And you can even eat and drink while you are there.

This long running dinner show at Fort Wilderness Campground is my number one choice for live performances at Walt Disney World.  Even though there is a pretty good price tag attached to this experience I feel it is well worth it—and spring for the Tier 1 seats if you can.  The show is kitschy, but it is fun and it is funny.  Watching my kids crack up at something that isn’t on the Disney Channel makes it all worth it.  There is singing and dancing and audience involvement.  Not to mention the delicious all you care to eat spread of comfort foods like fried chicken, ribs, corn bread, mashed potatoes . . . and strawberry shortcake!

This list just scratches the surface of the live entertainment options around Walt Disney World. Which performance has can’t miss status on your list?