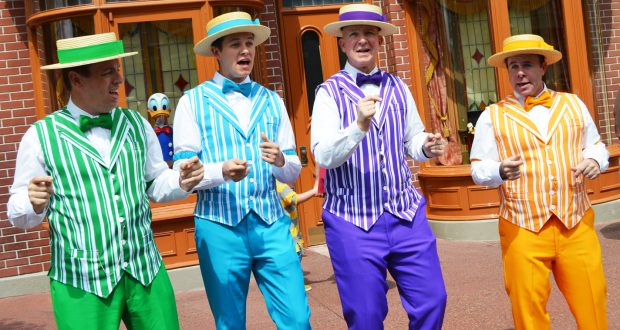 The Magic Kingdom is full of hidden gems, or small details that greatly add to the experience of visiting the park, but may go unnoticed if you’re not sure where to look. More so than hidden Mickey’s or bits of trivia, I find the best hidden gems to be the experiences that are somewhat underdone, making them all the more memorable. Certainly there are more than seven hidden gems in Walt Disney World’s original park, however the following list includes some of my favorites.

Sonny Eclipse is the audio animatronic alien who performs daily at Cosmic Ray’s Starlight Café in Tomorrowland. His set includes a variety of music, complete with the Space Angel backup vocals, and lyrics about the menu at Cosmic Ray’s and his home planet of Yew Nork. If you’re looking for a more unique quick service option, head on over to Cosmic Ray’s, where you can have a burger or chicken sandwich accompanied by live entertainment.

The Dapper Dans make up the Barbershop Quartet that performs daily on Main Street. This group is very entertaining, and adds to the atmosphere of Main Street USA with their lively sets. I make sure to see them at least once per trip. If you’re visiting the park during the holidays, check out the seasonal performances put on by the Dapper Dans—my favorite is during Mickey’s Not So Scary Halloween Party, when the Dans can be found performing in Frontierland as the Cadaver Dans.

4. EPCOT Model on the Peoplemover

A spin on the Peoplemover on the Magic Kingdom can also give you a glimpse into the idea behind Epcot. As the spiel on the attraction explains, the park was originally supposed to be an “Experimental Prototype Community of Tomorrow.” The model on the Peoplemover shows how Walt Disney envisioned this community, complete with the also realized monorail and Peoplemover systems. While the information about the original concept for Epcot is extremely brief on the attraction, it is an interesting hidden gem in the park, that might even inspire you.

3. Sorcerers of the Magic Kingdom

Sorcerers of the Magic Kingdom is an interactive card game, in which players collect spell cards and use them to defeat villains at different portals throughout the park. This game is often overlooked in favor of heading to rides and shows instead, but playing is totally free and addicting, especially if you love collecting Disney items, as you’ll end up going home with a collection of spell cards

If you’re a Disney history buff, you might have already noticed something special about the windows on Main Street . The businesses and names on the windows are all named after people who were extremely important or influential to Walt Disney or the company in general. You’ll notice Elias Disney for instance, who was Walt’s father, among other Disney greats such as Roger E. Broggie, Roy O. Disney, and Ub Iwerks.

If you walk directly through Cinderella Castle, you’ll notice a beautiful mosaic depicting the story of Cinderella. The mosaic is made with over 300,000 pieces of Italian tile, and some of the design even features such materials as sterling silver and 14k gold. Instead of rushing through Cinderella Castle on your way into or out of Fantasyland, take a leisurely stroll through the center on your next trip to admire the mosaic