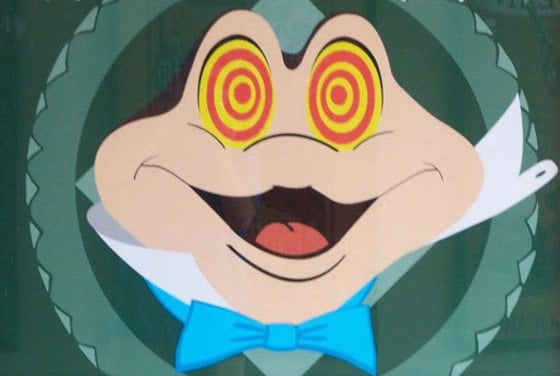 When he built Disneyland Walt Disney himself said, “Disneyland will never be completed. It will continue to grow as long as there is imagination left in the world,” and that has held true for all of the Disney Parks. The parks grow and change, and with that some of our favorite attractions are lost to history to make way for the new. Here is my list of the Top 5 Abandoned Attractions at Walt Disney World:

This staple of Pleasure Island at Downtown Disney had a very loyal fan following. The interactive vignettes that the talented actors created inside the club made for a fun evening for everyone in attendance—the regulars and newbies alike. Set in the 1930s and themed as a private club for travelers, the Adventurer’s Club used puppets, audio animatronics and improv actors to involve guests in the comedy of the night. With the demise of Pleasure Island, the Adventurer’s Club gave its last performance in September 2008 to a packed house. The props from the club have shown up in Hong Kong Disneyland’s Mystic Manner, D Street at Disney Springs, and at Trader Sam’s at the Disneyland Hotel. To all who loved the Adventurer’s Club I bid a fond ConGaloosh!

Located on Bay Lake, these two vintage “gates” were big attractions in the early days of Walt Disney World. River Country was the first waterpark on property, and it sported a swimmin’ hole theme that went along with Fort Wilderness nearby. River Country used water from Bay Lake that was filtered, and formed a large swimming area. In 2001 the park closed for the cooler months, and did not re-open with an announcement in the Spring of 2002 that it would close permanently. The eerie thing about River Country is that it was literally abandoned. Everything as just left there as it was on the last day. It would make a great haunted land for Halloween! You can see parts of it still if you take a boat to or from Fort Wilderness, or if you rent a watercraft on Bay Lake. Discovery Island, is similar to River Country in that you can still see its remaining structures from Bay Lake. It opened in 1974 as a place to observe wildlife, later becoming a zoological park. Discovery Island continued operation until 1999 when Disney’s Animal Kingdom opened and most of the animals were transferred to the new park or other zoos. The area of Animal Kingdom named “Discovery Island” is a nod to this earlier attraction.

May he rest in peace (over in the Pet Cemetery at the Haunted Mansion). This opening day attraction has a counterpart that still operates in Disneyland. This dark ride was unique in that it operated from two different sides, each with slightly different ride experiences inspired by the Wind in the Willows portion of Disney’s 1949 film, The Adventures of Ichabod and Mr. Toad. At one point riders from the two sides of the attraction careened toward each other (in slow motion) as though they were bound for a collision, only to be diverted at the last minute. When the ride closed in 1998 to make way for the Many Adventures of Winnie the Pooh, fans cried out and rallied for Mr. Toad. Some tributes to Mr. Toad are found in the park today. On the Many Adventures of Winnie the Pooh ride you can see a picture of Toad handing over the deed to Owl, and at the Haunted Mansion’s exit you can find the aforementioned statue of Toad at the top of the pet cemetery.

As a child going to the parks, this was the ride I loved to hate. While riding another abandoned attraction, the Skyway, I would see the beautiful lagoon below with the subs taking guests down in the depths. And inevitably, by the time we got to the queue it was down for some sort of mechanical issue (should’ve been the writing on the wall). I loved the attraction, I hated how often it was down. I did get to ride it a few times, and although it would definitely be considered “hokey” by today’s standards, I loved it! The whole impression of diving under the water, looking at the fish, the attack by the giant squid . . . suspending reality—that’s what Walt Disney World is all about! The attraction “temporarily” closed in September 1994, but never reopened. In 1996 the official announcement was made that 20,000 Leagues Under the Sea was going the way of the do-do.   Taking up a huge chunk of Fantasyland, the area was used for a few different things after it closed until “New” Fantasyland was built. Now Under the Sea – Journey of the Little Mermaid occupies some of its space. As a tribute, water was saved from 20,000 Leagues and poured into the grotto around the new attraction—that’s pretty cool if you ask me.

Oh how I miss you! This Epcot attraction as the continuation of Carousel of Progress at the Magic Kingdom. The slow moving ride started with a look at Jules Verne’s idea of the future, then took you through “modern” technology, and ended with a look at the possible future. Favorite parts: hands down the smell of the orange groves (the Soarin’ orange scent is a nice reminder) and the pick your own ending option (my choice was always Sea Castle undersea research). The attraction opened in 1983, and closed in 1994 for about a year when it reopened to offset closings of other Future World attractions (like World of Motion—another childhood favorite—that was becoming Test Track). In 1999 Horizons closed for good and was completely torn down to make way for Mission: Space. Although I miss World of Motion too, I am able to enjoy the attraction that replaced it. With Mission: Space replacing Horizons I feel that it really limited its audience (I, for 1, cannot ride either version of that attraction). There are some tributes to Horizons that can be found in the parks—the center of the gravity wheel in the queue has the original Horizons symbol in the center and the butler robot from the attraction has been on display in a couple of places (in Epcot for the 25th Anniversary and at One Man’s Dream in Hollywood Studios).

Those are my top 5 abandoned attractions from Walt Disney World. There are others that I miss—World of Motion, the original Journey Into Imagination, the original Backlot Tour with the residential street, and now I can add Maelstrom to the list. It isn’t that I don’t like the replacements (with the exception of Mission: Space), or that I don’t understand the importance of “Keep Moving Forward,” I just have a nostalgic attachment to these attractions. And Disney recognizes our attachment—as I write this article I am wearing my Maelstrom t-shirt with my glass resting on a 20,000 Leagues coaster. They have monetized our love for these forgotten rides with items for sale on disneystore.com (including limited edition/limited time offerings) and at the stores in the parks.

What is your most missed abandoned attraction?