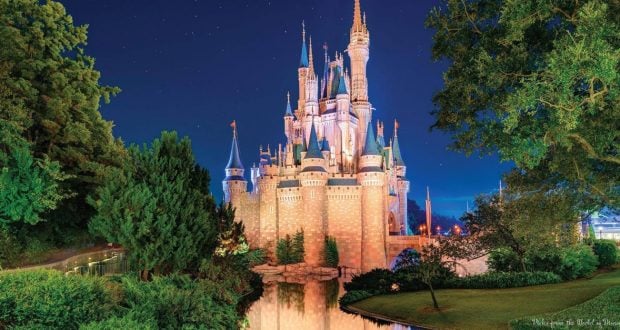 Cinderella Castle is the cause of many shouts of joy as it is spotted from the Ferry Boat in the mornings by first time visitors at Walt Disney World. As the boat gets closer and closer the excitement on faces, both young and old, grows. This is why Walt wanted the Transportation and Ticket Center to exist. He wanted a buffer between the Guests leaving their cars and arriving at the park. The Cinderella Castle draws us into the Magic Kingdom. Then inside the park it pulls us down Main Street U.S.A. Once the Castle has gotten a good look up close, then guests begin to look around and choose a direction to go. Can you just imagine yourself at the Magic Kingdom, on opening day crossing over the lake, ready to pay your $4.95 entrance fee and seeing Cinderella Castle for the first time? The Castle is an impressive piece of Disney Imagineering. Here are some thing you may, or may not, have known about Cinderella Castle.

12. Disney Imagineers have used forced perspective on Cinderella Castle, as well as other attractions in the Walt Disney World resort, to make it look larger than it really is. The windows and blocks appear to on the upper level are actually made smaller than those on the lower levels. These details are used to trick the eye into seeing the upper levels as much higher than they really are.

11. The Cinderella Castle has been the setting for dramatic stories, the most recent was The Kingdom Keeper’s book series. The characters in the books explored a Cinderella Castle that no one else has. The Castle interior has been used for many different purposes over the years. It has been a call center, break rooms for characters, costuming for characters, a gift shop, pretty much whatever Disney needed it to be. There has been a section that had been intended as a Disney family suite, but when Walt passed away it was left unfinished, until more recent years. Now it is a small set of rooms where special invited guests or celebrities may stay. If you look at the Castle from the Fantasyland side, you will see a set of three windows that have stained glass designs on them. This trio of windows is in the parlor area of this special suite. If you see these lights on at night, there is probably some lucky guest staying there.

10. Tinkerbell does make the decision each evening whether the weather is conducive to “flying” down the wire attached high up on the Cinderella Castle and the lower end near the Tomorrowland Terrace. You can understand why someone would be hesitant to slide down that long metal cable if there is any lightning in the area. The Cast Member playing Tinkerbell is more often a man since the weight on the rig and cable needs to be a certain amount. Tinkerbell must ascend a ladder to get to the area to which the cable is attached.

9. On some nights you may experience the “Kiss Goodnight”. If you are in Magic Kingdom, in the vicinity of the Castle, about 30 minutes after Park close you may have experienced this event. It consists of a recording of Roy Disney’s dedication speech of the Magic Kingdom accompanied by special lighting effects and ends with “When You Wish upon a Star” followed by the castle going dark. A reminder that your day is over so please go, or more affectionately named the “Kiss Goodnight”.

8. There are three elevators within the Cinderella Castle. One is actually a dumbwaiter that carries basically prepared food from the Utilidor level kitchen up to a second final prep kitchen on the same level as the Cinderella’s Royal Table restaurant. The second elevator takes guests up to the 2nd floor restaurant for their meals. The third elevator takes Cast Members or Guests up to the small rooms in upper levels of the castle, including the famed Cinderella Suite and goes down to the Utilidor level. This last elevator is mostly used by CM’s and is extremely small.

7. The height of the Cinderella Castle has been kept to just under 200-feet high. Any building that is 200-feet tall in Florida must mount a blinking red light on the top to warn aircraft. To avoid detracting from the elegance of the Castle, Walt Disney wanted the Castle to reach just below that mark.

6. A nightly projection show began in 2011 using the Castle as a screen. Photo Pass photographers’ work, which is photographing Guests at the park, were called upon as the material for this nightly show. Disney chose from all the photos taken that day, along with some character shots and ride photos, combining them into a nighttime spectacular, projected onto the Cinderella Castle. New productions have replaced the original show through the years. The castle boasts a 16.7 million color palette through the use of its unique lighting system.

5. The beautiful “Dream Lights” that adorn the Castle at Christmastime are great in number, over 200,000 LED lights, but they are also very energy efficient. The amount of energy it takes to run your home clothes dryer is about the same as it takes to light up this big castle to look like it has thousands of icicles hanging on it. This light tradition began back in 2007.

4. It took almost 18 months of construction to build Cinderella Castle. It is over 100 feet taller than Sleeping Beauty Castle in Disneyland. The Castle is like a fortress at the base, but let your eye drift upward and enjoy the finer details and romantic look of the rest of the design. Contrary to past rumors that the castle could be disassembled and moved in the case of a hurricane, it is actually built to withstand a hurricane. Its welded steel and concrete structure is a pretty strong structure, but if there is a hurricane hitting the park, and it is open, Cast Members will move Guests into the Utilidors beneath the park level.

3. How many towers can you count on the Castle? There are actually 27, each numbered, to make it easier to identify which one needs attention and for designing the decorating for them. The castle received its most recent makeover in 2013-2014 with a new paint scheme and gold accents. The color of the turrets on the Castle are echoed in the ones throughout Fantasyland.

2. If you take the path through the Castle you will see five mosaic murals depicting the story of Cinderella. It was designed by an Imagineer named Dorothea Redmond. There was a team assisting a mosaic artist named Hanns-Joachim Scharff. With 300,000 mosaic pieces, in an array of materials and a 500-color palette, the team completed these five panels in just 22 months. Some of the tiles contain actual sterling silver and 14K gold. Notice the colors of the faces on the evil step-sisters as Cinderella tries on the glass slipper.

1. Does it bother anyone that the roman numerals on the clock on Cinderella Castles’ front is represented by “IIII” rather than “IV”? This representation is also used on the clock on the front of the American Adventure in Epcot. Check the clock along the sidewalk on Main Street and the one at the Pirates of the Caribbean attraction, they both say “IIII”. Both symbols are correct as the “IV” symbol was not used until after the Colonial period. The Disney Imagineers carried this through the Cinderella film, which shows the same “IIII” representation. Interestingly, the clock depicted in Stained Glass in the Castle Suite, shows four as “IV”.