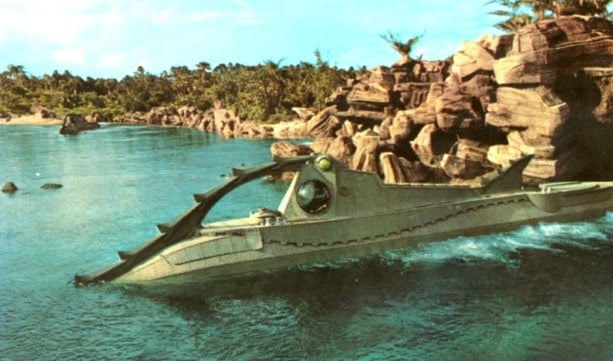 Top 10 Walt Disney World Rides We Wish Were Still Around

I’ve been feeling very nostalgic lately. Don’t get me wrong, I love the new attractions and I am absolutely over the moon that Disney is constantly reinventing themselves so that we can continue to have new and better technology, but I really miss some of the rides from my childhood.  Now, I just want to make a giant disclaimer: In no way is this list a “I wish the current ride that inhabits the space was closed for the old one” OR “ I hate the new ride”  NO NO…this is just a trip down memory lane of some rides I wish I could still ride!

I think that the death if this gem occurred when the future creeped up on us and Horizons was already outdated.  The entire basis of this attraction was to look from the future from a 1950’s standpoint. We learned what to expect from the future in our OmniMover and they even let us choose our own ending!  Oh, the memories.  At least we still have The Carousel of Progress to remind us that we are way more advanced than Virtual Reality and a self -timing stove!

This is one of the best memories from childhood.  The pretend ascent, the smell, the lame views.  I miss it all.  Most of all, I miss being ABSOLUTELY TERRIFIED of this ride and going on it anyway.  The idea of going underwater when I was 6 in a giant, clunky boat that I was never sure worked right was Disney’s first true thrill ride.  I do wish that they had turned the submarines into a Nemo adventure like in Disneyland.  So, I guess I have to go to California to experience that terror fest again.

I don’t know why, but while Body Wars was open I had to go on it every time I was at Epcot.  It wasn’t the best ride or the most technologically advanced, but I loved it.  Getting into the Bravo 229, we are sent out to destroy a splinter in a body.  I loved the idea of shrinking and the fact that the whole mission is in danger due to attacks from white blood cells!  My parents should have known the depth of my nerdiness way back then.

Just for the record, I used to spend the entire day at Magic Kingdom trying to muster up the chutzpah to actually get on this beast.  In the middle of summer it can get close to 100 degrees in the afternoon and one of the rules my Grandpa had was that you got to the park when it opened and left when it closed.  After a while, I was exhausted going back and forth between my favorite rides.  I know, major problems.  This swinging bucket 60 feet up in the air was a direct track from Fantasyland to Tomorrowland.  If you could survive the cardiac arrest, this actually was a peaceful ride with an awesome view. At least the Disney Skyline is coming to Walt Disney World as a key transportation option!

I still remember hearing these words…”Ladies and Gentlemen. Your Dreamflight will depart immediately for the future. Please prepare for supersonic takeoff” and getting giddily excited.  This slow moving attraction let you see the history of the airplane and I grew up in a time where airplanes and pilots were as revered as soldiers and Tom Hanks.  This also gave some of us the ability to see things we had never seen, like a propeller up close or aerial tricks.  The only thing I miss more than this ride is the silly If you had Wings song.  Oh, airplanes, I am fascinated by you!

These awesome boats that had their own skipper and it gave people a feeling of being on the open water.  A 5 minute trip was a long ride and it was so cool to get out on the water and enjoy something a little different.  Also, you had the fear that you might capsize and that was almost fun….until it actually happened at Disney Land in 1997.  The boats shut down there, but continued to operate for a few more years in Florida.  If I remember correctly, the keel boat captains also had fun shtick prepared and it was just plain fun.

I know that this ride was a real snoozer.  We loved riding this one purely for the air conditioning…all 60 seconds of it.  But, after this iconic ride closed, it made me realize that a 41 year old ride that celebrated the movie that really made Walt the success that he was was a sad event.  This ride was also one that Walt Disney actually had creative design over, so while it was totally lame and old school…can we have it back?

I have actually looked at my husband and told him that I have to go to DisneyLand for this one reason and he thinks I am nuts, but I miss this ride so intensely! Who could forget the jalopy that jerked you back and forth and around in not one, but two totally different tracks?  If the line was short, which was rare, my Dad would let us wait twice so we could do both sides!  From the disastrous train tracks, the saloon and the brief stop in hell, Mr. Toad sure took us on one wild ride. Rumors indicate that a movie is in the works for Mr. Toad…maybe Imagineers will consider reviving a lost gem?

Frozen Ever After is fun and the kids absolutely love it. It’s obviously very popular with the long line and impossible FastPasses to obtain. With that being said, we were sad to see Maelstrom go in the Norway Pavilion at Epcot. Maelstrom was an interesting dark, boat ride through several Norway scenes. Vikings took center stage instead of the now Anna and Elsa. The standby line here was always a short wait which made it a perfect ride to explore while walking around the World Showcase. Frozen Ever After takes the same track which we are thankful to be able to enjoy today.

Still making our hearts sink, The Great Movie Ride at Hollywood Studios made its last trip through the movies August 13, 2017. This attraction was actually the last operating attraction from Hollywood Studios’ opening day in 1989. With numerous audio-animatronics, theatrical sets, a few live actors, and much more – this attraction took guests through iconic scenes from twelve classic films throughout motion picture history. While we miss The Great Movie Ride, we are big fans of the new attraction, Mickey & Minnie’s Runaway Railway which opened in 2020.