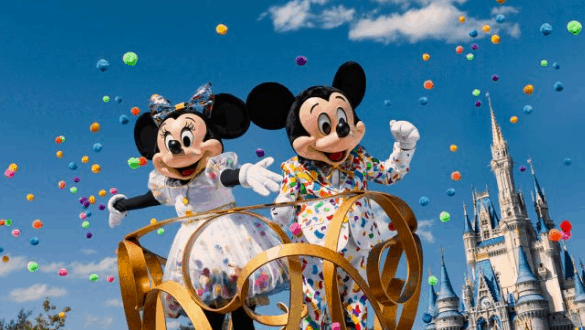 The holidays are a fantastic time to visit Walt Disney World because of the decorations and the festivities. That does not mean that you should stay away once the last carol has been sung. Winter is one of the best times of year to take a Walt Disney World vacation. If you need an excuse to drop everything and check flights; here are ten of them.

What is the weather currently like where you live? There is a good chance that it is warmer in Central Florida! Even better, there is a zero percent chance of snow. If you are tired of shoveling, take a spur of the moment trip. Just don’t forget to pack your bathing suit and the sunscreen. An exact opening date has not yet been announced for Star Wars: Galaxy’s Edge, but it will open sometime in fall, 2019. The fact that Disney is no longer saying “late fall” implies that things are ahead of schedule. Galaxy’s Edge is going to be a game changer for Walt Disney World, there are already jokes that you need to get in line immediately. If you want to avoid the crowd that is about to descend on Disney’s Hollywood Studios, catch the next plane.

The Walt Disney World Marathon Weekend will begin on Thursday, January 10, and “run” through January 13. There are still spots available in all of the individual races except for the 5K. The kids’ races and the Goofy and Dopey Challenges also still have spots. Walt Disney World is one of the best places to run because, well, because it’s Walt Disney World. If you’ve ever dreamed of running through all four theme parks, sign up immediately. The long running show Disney Junior, Live on Stage ended last year at Disney’s Hollywood Studios. In December, its replacement opened in the same building. Disney Junior Dance Party! features Doc McStuffins, Timon, and others. Vampirina is part of the fun, and Mickey makes an appearance as well. You don’t have to have a preschooler with you to enjoy this new show. It will appeal to the preschooler in your heart.

IllumiNations: Reflections of Earth is going to be ending its incredible 20 year run “in the second half of 2019”. Since Disney isn’t being very specific on an ending date, you’d better head to Walt Disney World soon. You do not want to risk missing it. 5. The Return of Mike and Sully

One of the casualties of the two new lands at Disney’s Hollywood Studios was the meet and greet with Mike and Sully from Monsters, Inc. in the back of the park. They will be returning on January 18. They will be greeting inside Walt Disney Presents. The greeting area has been for temporary characters in the past, and there is no guarantee that this will be a permanent meet and greet. That means that you need to make an emergency trip to Walt Disney World; Sully gives great hugs.

It’s hard to believe that The Lion King is turning 25. Hakuna Matata Dance Party is the perfect way to celebrate, and Disney’s Animal Kingdom is the perfect place to hold it. Timon and Rafiki will both be there. There will be Caribbean-style Disney songs, and everyone is encouraged to join in on the fun. Hakuna Matata Dance Party will take place at Discovery Island. The fun will begin on January 18. Just don’t pack your problems, because a “problem-free-philosophy” is required.

3. The Incredibles at Pixar Place

When Toy Story Land opened, Pixar Place closed, leaving many wondering what was going to become of the area. One rumor was that it would become a backstage area, never to be seen by the public again. It turns out that Disney had plans for this spot. On January 18, the Incredibles are coming to Disney’s Hollywood Studios. Pixar Place will be transformed into a Municiburg city block. You’ll be able to see Edna Mode’s Super Suit Gallery, and there will be appearances by Mr. and Mrs. Incredible, as well as Frozone. The Incredibles will be at Pixar Place only through September 30, so you’d better start making plans so you won’t miss out.

2. The Epcot International Festival of the Arts

There are now four festivals each year at Epcot. The newest is the Epcot International Festival of the Arts. In 2019 it will run January 18 through February 25. It celebrates the visual arts, the performing arts, and the culinary arts. There will be extra food kiosks around World Showcase and also in other spots throughout the park. The problem is that these dishes look too pretty to eat! The Disney on Broadway concert series returns and will take place daily, not just on weekends. It features duos singing classics from Disney musicals. There are also workshops, seminars, galleries, and much more. If you haven’t yet been to the Epcot International Festival of the Arts, pack your bag and make this the year. As you probably know, both Mickey and Minnie Mouse recently turned 90. The celebration is not over yet. In fact, at the Magic Kingdom, the real celebration will begin on January 18. In Town Square, Minnie will be joining Mickey to greet guests and take pictures. They’ll be dressed in their party outfits. (Pluto will temporarily take Minnie’s place in Pete’s Silly Sideshow.) You won’t want to miss the Move It! Shake It! MousekeDance It! Street Party. That will feature many of your favorite Disney characters, who are joining the festivities. The celebration will also include Limited-Time Magic. This could be unexpected characters, limited edition merchandise, or something totally different. Mickey & Minnie’s Surprise Celebration sounds like it will be the perfect way to celebrate the mouse who started it all and his main squeeze.