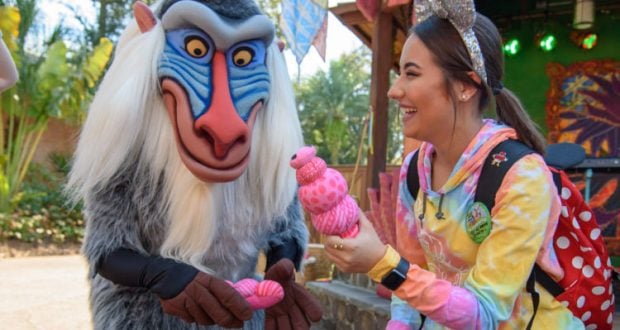 The calendar might say spring, but there are plenty of places where it still feels more like winter. Walt Disney World is not one of those places. The beginning of spring means warm days, cool nights, and (hopefully) not too much rain. That makes spring a fantastic time to visit Walt Disney World. If you need a reason to drop everything and head to Central Florida, here are ten of them.

The fact that it is spring is reason enough to visit Walt Disney World. The parks are beautiful all year long, but there is something special about Florida’s spring flowers. It’s great swimming weather, and the summer’s humidity has not yet arrived. The summer crowds have not yet arrived either. Pack your bathing suit, and head immediately to Walt Disney World, because spring is here! Pixar Place is the area where the Toy Story Mania entrance used to be before Toy Story Land opened. The street has been turned into a Municiberg city block. There’s a dance party with Mr. and Mrs. Incredible, as well as Frozone. The Enda Mode Experience will give you a chance to meet her yourself. You will also know that Jack-Jack has been around. If you want to experience The Incredibles at Pixar Place you will need to come soon, they pack up and leave after September 30. There is a brand new signature dining experience that you need to try at Disney Springs. Jaleo by José Andrés features Spanish tapas, wines, cheeses, and more. José Andrés is an internationally known chef and humanitarian, and he has won many prestigious awards. There are other Jaleo locations, but this is the first one in Florida. If you want to be among the first to try this incredible dining experience, head to Walt Disney World right away. One of the nice things about spring is that both of the Walt Disney World Water Parks are open again after their annual refurbishments. The two water parks are becoming more than just a place to cool off on a hot day and to eat soft serve ice cream. There are new menu items that are going to make it worth staying out of the water after eating. For example, at Blizzard Beach the Blizzard Burger is topped with cheddar and served on a pretzel bun, while at Typhoon Lagoon you can order a flight of guacamole. To make you want to hit the water parks immediately, Disney is currently offering a Splash Pack. It includes select entrees, dessert, a water park refillable mug, and a themed towel. The Splash Pack costs only $44 each, but it’s only available through May 4. It’s hard to believe that The Lion King has been around for 25 years! What better place to celebrate such a milestone anniversary than Disney’s Animal Kingdom? To help with the celebration, you will want to take part in the Hakuna Matata Time Dance Party. Timon and Rafiki dance and play games with the crowd, and there could be other surprises as well. Hakuna Matata Time Dance Party runs only through September 30, so you’d better hurry. While in the park you will notice photo ops. These are a great way to celebrate as well. You can show your love for The Lion King in these photo opportunities, so don’t wait much longer. Even though both Mickey and Minnie turned 90 last year, that does not mean that the party is over. It is still going on each day at the Magic Kingdom. Move It! Shake It! MousekeDance It! Street Party takes place at least twice a day. You can party with Mickey and plenty of his friends. Inside Town Square Theater Minnie has joined Mickey and you can take a picture with both of them in their party outfits. Currently Pluto has taken Minnie’s place in Pete’s Silly Side Show, but she will return after September 30, so don’t wait. A brand new experience is opening at Disney’s Hollywood Studios on March 31. Lightning McQueen’s Racing Academy will give you a chance to become a “rookie racer”. There’s a racing simulator and a wraparound screen, which will make you feel as if you really are in the middle of things! Several original voices returned for the adventure. There will also be a Cars themed dance party, and a chance to meet Cruz Ramirez. If you want to experience Lightning McQueen’s Racing Academy as soon as possible, you need to start packing. The most colorful of the four Epcot festivals is currently in full bloom. The Epcot International Flower & Garden Festival is bigger and better than ever this year. You’ll find all of your favorite topiaries, Garden Rocks is now running nightly, and there are more delicious food choices than ever. The most popular item this year isn’t even edible, it’s the Orange Bird Sipper Cup, which is sold at The Citrus Blossom outdoor kitchen. If you see that they are available, buy one, because they are having a hard time keeping them in stock. It has been announced that IllumiNations: Reflections of Earth is going to run only “through the end of summer 2019”. That means that there is not much time left. Although there is no doubt that the replacement show is going to be spectacular, IllumiNations is a classic. You need to see it again before it’s gone forever. It has been announced that Star Wars: Galaxy’s Edge is going to open on August 29. The anticipation has been building for years, and there are already plenty of memes about where the line to get in will start. Disney has announced that capacity is limited. If you think that the other parts of Disney’s Hollywood Studios are going to be empty, that probably will not happen because it is a small park. If you want to see Disney’s Hollywood Studios before it changes forever, you’d better visit now.