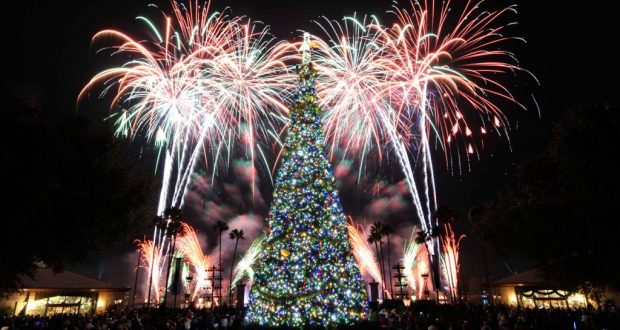 The Halloween decorations have barely been put away, but Christmas is already in full swing at Walt Disney World. The song says that “it’s the most wonderful time of the year”, and that definitely is the right description! Here are the top ten reasons why you need to drop everything and head to Walt Disney World right now, or at least before the end of December.

If the only thing that is keeping you from booking that flight is that you do not want to experience crowds, Disney has you covered. Disney After Hours has been extended to both Disney’s Hollywood Studios and Disney’s Animal Kingdom, the only park without it is Epcot. With your special event ticket, you’ll receive three hours in the park in question with minimal crowds. A very limited number of tickets are sold. With your ticket you can enter the park at 7:00, then stay for the event. You’ll receive novelty ice cream and drinks as well. With Disney After Hours you can hit all of your favorite rides over and over again without having to worry about the crowds.

The toys in Andy’s backyard have gotten into the holiday spirit! Toy Story Land has a fun holiday overlay with some whimsical photo opportunities. Of course visiting Toy Story Land without the summer heat is reason enough to drop everything and head to Florida right now. Visiting the Deluxe Resorts needs to be part of your Walt Disney World vacation. Between the gingerbread house at Disney’s Grand Floridian Resort and the tree at Disney’s Animal Kingdom Lodge, you will be wowed around every corner. Visit as many of the Deluxe Resorts as you can, because the decorations are all different and magnificent.

The Christmas Tree Trail continues to grow each year. This year it is up to 27 trees! You’ll find trees based on Disney classics such as Alice in Wonderland and Cinderella, but there are also new trees based on Star Wars and Haunted Mansion. There’s even a Disney Springs tree! After you’ve seen them all, explore the rest of Disney Springs. There’s plenty of holiday cheer, including Stitch’s Holiday Gift Hunt and Santa’s Chalet. Disney Springs is also THE place for your Christmas shopping. Check out the newly refurbished World of Disney Store for a little extra magic. Projections, lasers, and fireworks, what’s missing from this fun show? Santa, that’s who is missing, literally! Don’t worry, Wayne and Lanny of Prep & Landing are on the case. If you don’t want to fight for a good viewing spot, book the Jingle Bell, Jingle BAM! Holiday Party. You’ll enjoy snacks, desserts, and beverages, including the gingerbread martini for those of age. You’ll then have a special viewing area for the fireworks.

5. UP! A Great Bird Adventure

4. Epcot International Festival of the Holidays Last year, Sunset Seasons Greetings took away a little bit of the ache from losing The Osborne Family Spectacle of Dancing Lights. This year, the projections show on Tower of Terror will blow you away! Lasers have been added, and they create incredible effects when the “snow” starts to fall. The actual projections are pretty amazing as well. The Osborne Family Spectacle of Dancing Lights will always be missed, but Sunset Seasons Greetings has become must-do. Don’t miss it.

Mickey’s Very Merry Christmas Party runs on select nights between now and December 21. There are shows, dance parties, extra characters, and more cookies than you’ll be able to eat in a single night. The party is a special ticketed event, your general admission ticket will not get you in. If you don’t have a party ticket and want to see Mickey’s Once Upon a Christmastime Parade, it will take place during normal park hours December 22 through December 31. Holiday Wishes will take place December 22 through December 29, then it will be two evenings of Fantasy in the Sky Fireworks to celebrate the coming year. During Epcot International Festival of the Holidays, IllumiNations has a special holiday ending. It’s been announced that IllumiNations will end its run next summer. That means that this will be your last chance to experience the holiday ending. That’s one of the best reasons ever to drop everything and head to Walt Disney World.