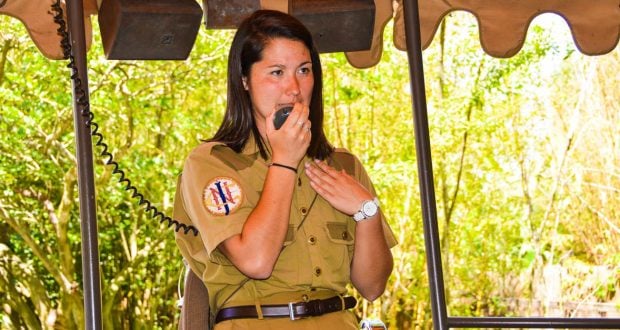 Of the four theme parks in Walt Disney World, guests love to spend lots of time in the Magic Kingdom. The park opened with Walt Disney World in 1971 and is home to several unique lands which aim to bring guests to different places in time, location, and imagination. One of the Magic Kingdom’s areas is Adventureland where guests can embark on exotic and thrilling journeys in far off places. The Jungle Cruise is one of the most popular attractions in Adventureland and for good reason. The attraction invites guests to set sail on a daring journey down some of the most exotic and famous rivers in the world. Along the way there are lots of beautiful sights and totally groan worthy jokes thanks to the wonderful skippers who pilot each boat. With each experience being slightly different thanks to the humor of the skippers, guests love to enjoy the Jungle Cruise time and time again when in the Magic Kingdom. Despite experiencing the attraction many times, there are some hidden details and facts that some guests might not know about. Here are the top ten mind blowing facts most guests don’t know about the Jungle Cruise.

The jokes and puns on the Jungle Cruise begin long before guests board their boats. Once on the queue, guests should be sure to look all around them for many wonderful details that are often pretty humorous. One detail that can be found in the queue references a unique crew member who seems to have a rather unfortunate name. Guests should look for the name E.L. O’Fevre and then pronounce it quickly!

Another great sign that hints at the humor of the skippers can be found right near the boarding area. Guests can check out a sign describing the different meals that the skippers enjoy each night. While each meal may look unique, those who look closer might realize that chicken seems to pretty much be all that is available in the jungle!

The Jungle Cruise features several references which pay homage to individuals who helped make the attraction a reality. One of those individuals is Imagineer Bill Evans. Evans was a horticulturist who was responsible for designing the landscaping and vegetation found throughout Adventureland. Evens worked tirelessly before the Magic Kingdom opened to design a landscape that transports guests to an exotic and thrilling location deep in the jungle or other locations of the world. In addition to most of Adventureland, Evens also designed the landscaping for the Jungle Cruise and guests who look closely throughout the attraction’s queue might spot a create bearing his name. The crate features the company name “Evans Exotic Plant Exporters.”

Underneath the Evans Exotic Plant Exporters name is an address that might seem random, but that actually pays tribute to the original Disney theme park. The address is 1313 Harbor Boulevard, Anaheim California which is the actual address of Disneyland! The zip code of 71755 stands for the date July 17, 1955 which was the official opening day of Disneyland.

Once near the loading dock, guests can really check out the unique and quaint boats that bring them on their river expeditions. Each boat found at the Jungle Cruise features its own unique and often alliterative name including Congo Connie, Ganges Gertie, Nile Nellie, Senegal Sal, and Wamba Wanda.

The Jungle Cruise is also home to several Hidden Mickeys, some of which can be found in the queue and another which is extremely difficult to spot. When moving through the temple scene filled with animals like tigers and monkeys and lots of treasure, guests should look to the left hand side of their boats. Just before exiting the temple there are columns that stick out from the walls and guests should focus on the second from the exit on the left. On that column is a large portion of rock that seems chipped out that forms a Hidden Minnie found looking to the side in silhouette. The easiest way to spot her is by looking for her bow first!

At one point during the Jungle Cruise, guests are ambushed by several natives wielding shields and spears. Those who listen closely can hear attack cries as well as one particularly interesting call that references a specific style of music. The first two natives yell out illegible noises, but the third declares “I love disco!”

Near the end of the Jungle Cruise, guests get the opportunity to meet Trader Sam who is the local jungle salesman. Sam always has a great deal running where he can trade two of his heads for one guests’ but there sadly never seem to be any takers. Guests definitely recognize Trader Sam, but they might not know that he has his own eatery and lounge over at Disney’s Polynesian Village Resort. Trader Sam’s Grog Grotto offers up unique cocktails and small bites in an awesome setting.

When the Jungle Cruise was first being conceptualized, Walt Disney himself wanted to use real animals, however the idea was forgotten due to the unpredictable nature of real wildlife. Many years later, Disney’s original dream to feature real animals in a theme park can true when Disney’s Animal Kingdom opened in 1998.

While the Jungle Cruise is an amazing experience, it takes on a whole new level of holiday cheer each Christmas season. The attraction transforms into the Jingle Cruise and is totally decked out in decorations, silly details, and plenty of holiday puns and jokes provided by the skippers.