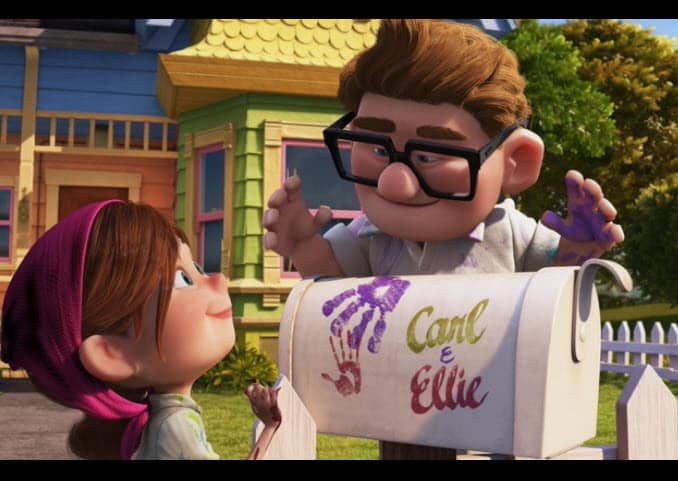 Everyone knows that the writers with Disney Animation and PIXAR can weave fantastic tales that draw you in and connect you with characters that are drawn as much as a good live action movie can connect you with real people. I am really amazed at every Disney and PIXAR movie at the level of character and relationship development. One of those relationships is the love between two characters—and it may not always be “love” in the true sense of a “love story.” Here are my Top 10 Disney Love Stories:

Two strangers from different worlds who fall for each other even though their initial purposes are very different. They have to overcome some programming issues to find each other. And then they would risk anything for each other. Wall-E falls first, but then Eva can’t live without him.

Here is your typical love story: nice girl meets smarmy egotistical guy. She just goes about her business being herself and he falls for her, and reforms himself as a better person because of her. Then he realizes her true burdens in life and would risk his life to save her. The scene in the boat with the lanterns may be the most beautiful animated scene in Disney Animation.

Any mother or daughter can surely appreciate the relationship between Merida and Queen Elinor in Brave. Their story just takes a bit more drastic turn than most mom/teen girl relationships. Through all of the struggles, when all Merida wants is to have her mother back, it is a touching moment for the entire audience—we can all connect to that need for our mothers and the bond between mother and child.

I’m a big Little Mermaid fan, but I think Ariel and Eric have earned a place in the top 10 list. Ariel was devoted from first site, and risked everything she knew in life to pursue Eric. Eric was infatuated with the voice he knew saved his life in the storm, but when unable to find that girl he began to warm up to the voiceless Ariel. That nasty sea witch intervened again almost to near disaster for Eric, but immediately upon regaining her voice (and Eric overcoming the spell) the two were reunited to end Ursula and live happily ever after.

6. Lady and The Tramp

Nice girl next door and the bad boy—just in dog form. They band together to help each other through the troubles that come with the baby, those cats, and Tramp’s capture. And the scene sharing the spaghetti at Tony’s is cinematic legend.

This sisterly relationship has its ups and downs. At the very beginning of the movie it is obvious that they are best friends and playmates, then Elsa becomes withdrawn due to her “curse.” Anna’s devotion to her sister to pursue her through dangerous situations is evidence that she never stopped loving her sister (despite the awkward exchange at the beginning of the coronation and Elsa’s refusal to let her marry). And when the act of true love ends up being between the two sisters when Anna saves Elsa’s life—this marks it as one of the best love stories in Disney films.

Ok, show of hands—who did NOT cry at the end of Toy Story 3? That’s what I thought. As the mother of 3 boys, the connection that Andy has with this toy that is the object of his imaginary playtime is so true and touching. And Woody’s devotion to Andy is true love any way you look at it. Watching their relationship grow over the 3 movies makes the ending of the third even more emotional.

No, this one is not in a film, but I’m sure it influenced all of the films because Walt and Lillian Disney’s relationship was one that both exemplified and outlived classic Hollywood. Lillian worked for the Disney Company in the Ink and Paint department when Walt met her and began his courtship.  In 1925 they were married in Idaho, and stayed together until Walt’s death in 1966. A 41 year marriage in Hollywood is no small feat. Walt named one of the railroad cars in Disneyland the Lilly Belle after his wife, and they celebrated their 30th anniversary at the Golden Horseshoe in Disneyland. According to Wikipedia, Lillian said this about her marriage to Walt, “We shared a wonderful, exciting life, and we loved every minute of it. He was a wonderful husband to me, and wonderful and joyful father and grandfather.”

“Tale as old as time . . .” two very different people forced together and something beautiful comes of it. Beast is rough with Belle and rude, but she continues to be the sweet, provincial girl that she is. Over time they warm to each other and fall in love, even in his beastly state. Belle defends Beast to the town’s people, and in the end it is her kiss that breaks the spell of the old lady and the enchanted rose and Beast and his entire castle of servants turn back into real people. The fact that they are able to see the best in each other despite the circumstances makes this love story #2 in Disney films.

Again, I challenge anyone to watch the first 15 minutes of this film without shedding a tear or down right boo-hooing. We don’t get to see a lot of Ellie, but that opening montage sets us up to all that we need to know about her character and her relationship with Carl—the rest we learn through Carl’s adoration of her even after her passing. The house is a symbol for him of all of the love that then two of them shared, and the unrealized dreams. Once Carl realizes (on his crazy quest for Ellie’s ultimate adventure) that they life they shared together was actually her ultimate adventure—that is true love. I’m tearing up just thinking about the love and mutual adoration they shared through their lifetime. Definitely number 1 on my list.

Which love stories would you rank among the best in Disney history and why?