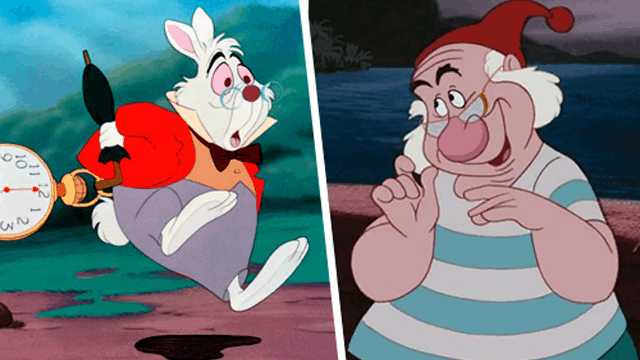 Did you know Disney has often used the same people to voice different characters in their movies? Why not? When you’ve got talent, use it! Check out our Top 10.

10. The Cheshire Cat from Alice in Wonderland and Adult Flower from Bambi From innocent and shy to pretty darn crazy, both these characters were voiced by Sterling Holloway. Holloway also was the voice of Mr. Stork from Dumbo, Professor Holloway from The Three Caballerros, Roquefort the mouse from the Aristocats, and Kaa the snake from The Jungle Book!

9. Cogsworth from Beauty and the Beast and Governor Ratcliffe from Pocahontas This one was very surprising to us! One is a gold-hungry villain and the other an excessively anxious, but kind-hearted clock. Talk about talent! David Ogden Stiers voiced these two characters, along with the Archdeacon in The Hunchback of Notre Dame, Mr. Harcourt in Atlantis: The Lost Empire, and Jumba Jookiba from Lilo & Stitch!

8. Thomas O’Malley from Aristocats and Baloo from The Jungle Book 7. Lady Tremaine from Cinderella and Maleficent from Sleeping Beauty Disney must have thought Eleanor Audley had a delightfully sinister voice to cast her as both of these frightening female villains. We think she nailed it on both! What do you think?

6. Nanny, Queenie, and Lucy from 101 Dalmations Talk about a triple threat! On top of voicing three characters in 101 Dalmation, Martha Wentworth lent her voice to two in The Sword in the Stone – Madam Mim and Granny Squirrel.

5. The Duke of Weselton from Frozen and King Candy from Wreck-It Ralph We have to admit, Alan Tudyk’s voice is spot-on for these funny, yet hated villains.

4. The White Rabbit from Alice in Wonderland and Mr. Smee from Peter Pan Mr. Smee has to be one of the most lovable Disney villains. He also happens to be in much less of a hurry than the White Rabbit. Bill Thompson was also the voice of Jock from Lady and the Tramp and King Hubert from Sleeping Beauty.

3. Bruno, Gus, and Jaques from Cinderella 2. The singing voice for Princess Jasmine from Aladdin and Mulan from… Mulan Can you believe it? “A Whole New World” and “Reflection” were both sung by Lea Salonga. We love these princesses and we love her voice!

1. Alice from Alice in Wonderland and Wendy from Peter Pan This caught us the most off guard! We love this because these ladies surprisingly have a lot in common. Both end up in a land far away from home. Voiced by Kathryn Beaumont, Alice and Wendy are both pretty and adventurous!

Did we leave any out? Let us know!