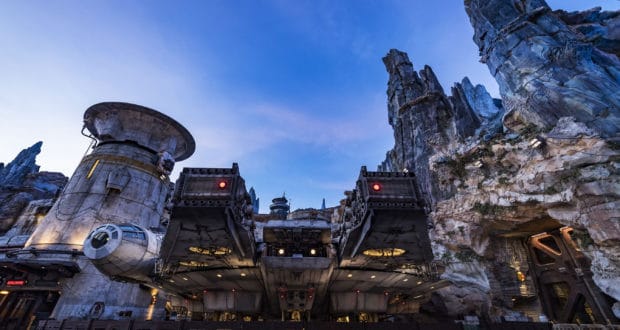 Things That You Might Not Know About Star Wars: Galaxy’s Edge

For years “Star Wars” fans dreamed about being able to physically visit a galaxy far, far away. In 2019, Disney made that dream come true. Star Wars: Galaxy’s Edge opened on May 31, 2019 at Disneyland in California, and then on August 29, 2019 at Disney’s Hollywood Studios at Walt Disney World in Florida. Things got even better when arguably the best ride on the planet, Star Wars: Rise of the Resistance, later opened in both versions. The lands on both coasts are large, and it is impossible to take in every detail. Here are some things that you may not know or might have missed at Star Wars: Galaxy’s Edge.

Star Wars: Galaxy’s Edge is located on the planet of Batuu. The Walt Disney World version is often called Batuu East, while Disneyland is Batuu West. The name of the village that you visit is Black Spire Outpost. Batuu does not appear in any of the “Star Wars” movies or series, at least not now. It was decided by the Imagineers that a new planet should be created, because people already have a picture in their minds of what Tatooine or Dagobah would look like. Batuu and Black Spire Outpost are included in some of the recently printed works.

There is a Resistance Base Camp on Batuu, and that means that you might see some familiar faces. Rey and Chewbacca can often be found near Rise of the Resistance, while Stormtroopers and First Order Officers are often out and about near the TIE Echelon. Kylo Ren often storms through the area, looking for people who are sympathetic to the Resistance. There is also a brand new character named Vi Moradi, and she is awesome. Vi is General Leia Organa’s personal spy, and with her blue hair and orange jacket she’s easy to spot. If you’re lucky, you might be able to see Vi interact with the Stormtroopers. She will escape, of course. While you might be able to get a picture with a character, there are no official meet and greets. That is because they’re supposed to be working, not posing for pictures.

If you ever rode the original version of Star Tours, you probably remember R-3X, or Rex. He was the inept pilot that took you on quite the adventure. Rex was fired and marked defective, you can find that version in the current Star Tours queue. Fortunately for Rex, he has found a new job. In Black Spire Outpost he is the DJ in Oga’s Cantina. If you want to know how he got there, you need to travel to Batuu East. There is a spot on the right as you enter from the Toy Story Land side where you can see a crashed ship. That was the ship that Rex “landed” in. The wreckage of Rex’s ship is not found in Batuu West.

Music is a huge part of the experience at any Disney Park. You’re hit with it before you reach Bag Check! Things are a bit different on Batuu. There is no music playing throughout the land. The decision to not have music makes sense. You would not have music blaring throughout a town, so you shouldn’t have it on Black Spire Outpost. That doesn’t mean that there’s no music in Galaxy’s Edge. Both Rise of the Resistance and Smugglers Run have music while you ride. Han always had music while piloting the Millennium Falcon, so you need it as well! There’s also music as you enter the land. The legendary John Williams composed “Galaxy’s Edge Symphonic Suite”, for which he won a Grammy Award. As already mentioned, Rex is spinning the latest hits in Oga’s Cantina. So you’ll find plenty of music, it’s just not the typical theme park soundtrack type.

Just because there isn’t music throughout Star Wars: Galaxy’s Edge does not mean that there aren’t plenty of sounds. All that you need to do is to listen. The sounds differ, depending on which part of the land you’re in. You might hear a ship flying overhead, or it could be a creature walking through the woods. In one area someone left a radio on, so you can hear the station, including the ads! The sounds of Galaxy’s Edge are realistic, and they could change, depending on the time of day. Spend a few minutes standing on the side, close your eyes, and just listen. It adds to the overall immersion.

If you’re lucky enough to visit both Batuu East and Batuu West, you might have noticed one big difference. Many of the buildings are different colors! They’re the same color scheme, but the buildings are darker in the East. While never officially explained by Disney, the consensus is that the colors are different because of the Florida sunshine. Colors fade quickly in the Sunshine State. It’s assumed that eventually the colors on the buildings on Batuu East will fade in the bright sunshine. Then the two versions will be a closer match.

Hidden Mickeys have made it to the Outer Rim! You can find them on both coasts. The Hidden Mickeys in Galaxy’s Edge are subtle, and if you think that you have found one you’re probably right. This is another place where the two versions of Batuu are different. The Hidden Mickeys do not match in the East and West versions. There are other things hidden throughout the lands that are not shaped like Mickey. One of the more popular things to look for is the hidden Millennium Falcon that is located within the outdoor portion of the Millennium Falcon. It’s a ship within a ship.

Some of the most memorable scenes in “Star Wars” have included sunsets. That makes sunset a must-visit time for Star Wars: Galaxy’s Edge. Since the land uses lighting effects after dark, there are vibrant colors on the “landscape” once the sun starts to fade. Once the sun is down, stay or return for the fireworks. The fireworks viewing is better in Batuu West than in Batuu East. The original trilogy ended with fireworks, so Galaxy’s Edge is a fitting place to watch them from.

2020-05-03
PaulaK
Previous: Star Wars: The Rise of Skywalker Coming to Disney+ on May the 4th
Next: All-New Droid Depot App Brings Star Wars: Galaxy’s Edge to Life at Home