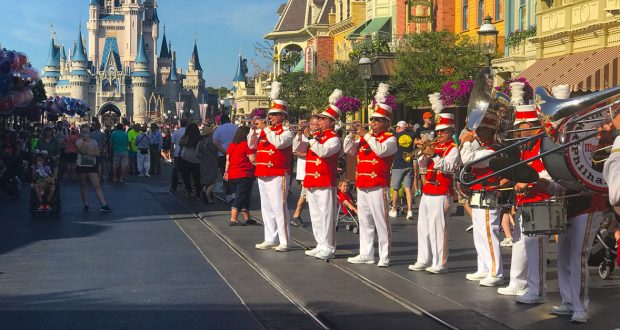 There are hidden gems around almost every corner at Walt Disney World. They are not literally hidden. Some are things that you probably would not expect to find at the world’s most popular theme parks, others you just might not notice or know about. In coming up with this list I tried to include a variety, so that there would be something for everyone. There are thousands of other hidden gems that are not listed here.

The gardens at Epcot aren’t exactly hidden, but they qualify for this list because all too many people rush right by them. If you’re looking for a quiet spot to stop and relax for a few minutes while you’re at Epcot, look for a garden. Possibly the best three pavilions to find a quiet garden in are the United Kingdom, Canada, and Japan. They each have their own national flair. Too much time of a Walt Disney World vacation is spent rushing to get from one place to another. If you visit a garden you will literally be able to stop and smell the roses.

There are people who have visited Walt Disney World countless times who have never even heard of the Electrical Water Pageant. It’s a fun show that you can see from the shore at the Magic Kingdom resorts. The first show of the evening takes place at Disney’s Polynesian Village Resort, and it wraps up at either Disney’s Contemporary Resort or the Magic Kingdom. You’ll see lit-up sea creatures and listen to Disney songs. The theme then changes to a patriotic one. After the show wraps up at one spot, the boats float to the next resort and it starts all over again. It’s something that you need to see to believe.

If you’re looking for a relaxing way to spend a day off from the parks but don’t want to leave Disney property, plan a trip to Tri-Circle-D Ranch. You will be able to see the horses that are used in various places across Walt Disney World, such as the white ponies that pull Cinderella’s carriage. You can also schedule horseback or pony rides, or the entire family can enjoy a fun journey in a carriage. While there is a fee for some of the activities, you can walk around and see the horses for free.

While the fireworks are obviously not hidden, what is not known is that there are plenty of places to watch them outside of the theme parks. If you arrive in Central Florida too late to use a day of your park ticket, you can still see the fireworks. There are great views of Epcot fireworks near Disney’s BoardWalk. If you want to see Happily Ever After, head to Disney’s Contemporary. There is an observation deck there where you can watch them, or make a reservation at California Grill. The other Magic Kingdom resorts also have great views of Happily Ever After, so plan to watch the fireworks and the Electrical Water Pageant on the same evening.

Looking for a cheap souvenir? For only 51 cents you can have something to remember your trip by. Pressed Penny machines are found near rides, in restaurants, in shops, and pretty much around every other corner. They are easy to ignore and walk by, but they provide a fun and inexpensive way to remember some of the highlights of your vacation. If you plan to collect pressed pennies bring some shiny new pennies from home, and also have a roll or two of quarters. That way you won’t have to ask for change every time you see a penny that you want to add to your collection. There are machines for other coins as well, but pennies are by far the most prevalent.

2) Lunch at the Epcot Resort Restaurants

If it’s time for lunch at Epcot and you don’t have a dining reservation, there’s a good chance that you’re going to have to wait in a long line. There is another choice, you can head over to an Epcot Resort and have a more leisurely meal. Many people don’t realize that there are great restaurants so close to Epcot’s back door. Grab a burger and a sundae at Beaches & Cream, or enjoy lunch at ESPN Club (when it’s much less crowded than it will be in the evening). The Epcot Resort restaurants are close to the park, so you’ll still make your Test Track FastPass+ time. Lunch at an Epcot Resort restaurant is also close if you’re spending the day at Disney’s Hollywood Studios, but it will take a little longer to get there.

If you’re in the Magic Kingdom near 5:00pm, head to Main Street, U.S.A. and witness a special ceremony. It is a beautiful tribute. There are patriotic songs and The Pledge of Allegiance is recited. As the American flag is lowered The Star Spangled Banner is played, and a park guest who was previously chosen assists. The ceremony is not long, and it could be the highlight of your day.