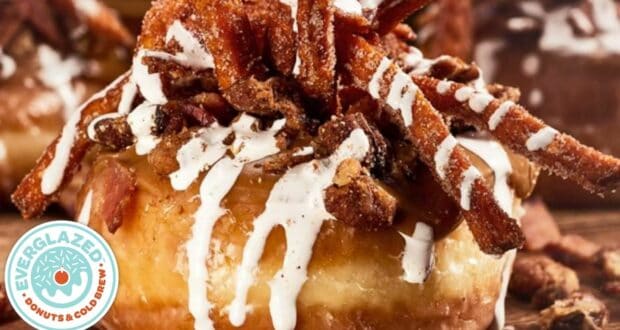 Thanksgiving had a party on this donut at Disney Springs, and everyone was invited!

It’s the Sunday after Thanksgiving, and no doubt we’re all feeling the effects of our holiday celebrations on Thursday. Maybe today, all that remains from your Thanksgiving are two aunts who just won’t leave, a Rubbermaid bowl of leftover giblet gravy in the fridge, a disheveled family room, and a pair of jeans that are just too darn tight.

RELATED: “Bigger in Texas”: A Thanksgiving story of a Mom and family of 29 who get the Disney shock and surprise of their lives Some Disney fans, however, headed to Disney Springs this holiday and got their Thanksgiving on in the form of a donut. That’s because at the Walt Disney World Resort, you can find all kinds of tempting options when it comes to selections of donuts–many of which have the ingredients stacked right on top of the glistening sugary dough ring.

RELATED: Here are the best places to get your donut fix at Disney World!

If that’s your kind of dessert, Everglazed Donuts & Cold Brew at Disney Springs has you covered. We’re not talking about your classic donut shop here. After all, who says doughnuts are just for breakfast?

You won’t be thinking about breakfast at all when you hear about this year’s Thanksgiving-themed donut at Everglazed Donuts at Disney Springs. It’s the Sweet Potato-Pecan Pie Mash-Up donut, and you can only get it at Everglazed, and only through today. 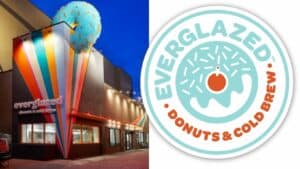 The donut is first dipped into caramel icing, then pressed face down into a pan of crushed and chopped candied pecans. Several cinnamon sugar-dusted sweet potato fries pop out from the center of the donut. Sweet and salty bacon pieces adorn the top of the Thanksgiving pile-up, and then the sinfully scrumptious beast is drizzled with marshmallow cream, just for good measure, and in case they missed anything. (Don’t worry; they held back on the mashed potatoes!)

The Sweet Potato-Pecan Pie Mash-Up donut literally leaves nothing to be desired, and it’s the perfect choice for those in the family who always have trouble deciding which dessert to enjoy after the Thanksgiving feast. Everglazed’s Thanksgiving offering lets you have two favorite holiday desserts in one! 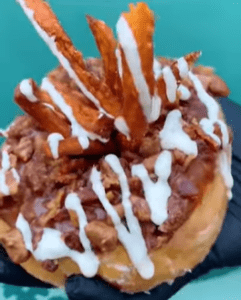 Don’t forget to order your favorite coffee to accompany your Thanksgiving dessert donut! Everglazed has some of the most delicious cold brew coffees at Disney World.

Today is the last day the delectable delight will be available at Everglazed Donuts & Cold Brew at Disney Springs (but surely some copycat versions have already surfaced in the homes of delighted fans who can’t get to Disney Springs today).