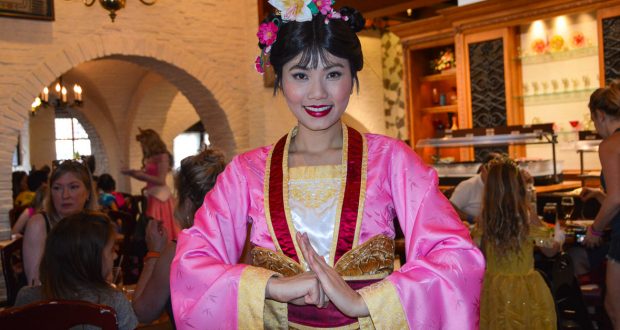 The Disney Princesses are undeniably Disney royalty and part of the magic; bringing joy to Disney fans and bringing a big draw to the Parks for a chance to meet them.

1. There are requirements to become an official Disney Princess.

Being a princess must be a primary role in the first version of their tale (no new characters from sequels) and must be human or human like, like perhaps, a mermaid like Ariel or if you were only a frog for a little while like Tiana. They usually are Royalty though birth or marriage, though Mulan is neither, but does receive grace from the Emperor. Some argue that Pocahontas is not royalty, but she is the daughter of the Chieftain. They also seem to have some more in common; they sing beautifully (Merida being from the Pixar franchise does not sing, unless you count her younger self), usually get along really well with animals and typically get the guy! Of course, Merida is pretty against marriage and Pocahontas gets the guy, but lets him go.

2. When the Disney Princess franchise was marketed in 1999-2000, Tinker Bell was part of the lineup!

She was removed and made the focus of the Disney Fairies franchise. Tinker Bell, though she does not speak in Peter Pan, is spunky and awesome. I am so glad that Disney has built a world around her!

Even though the movie came out in 1937, 14 was way below the average age of marriage! But, the Prince woke her up from death, so I guess that is true loves fate! Jasmine is only 15 and when animators drew a 15 year old version of Aladdin, they realized how much younger he looked than the finished drawings of Jasmine. Eventually, Aladdin was drawn to appear old enough to pursue Jasmine.

4. Princess Aurora has only 18 lines of dialogue

… and is only on screen for 18 minutes making her the quietest Disney Princess. She also never meets her nemesis, as Maleficent curses her when she is a baby and Prince Philip takes care of her before he rescues the sleeping Princess.

5. All of the Princesses either have sisters or are an only child.

6. Remember the beautiful dance sequence with Belle and the Beast and that beautiful yellow gown

It’s actually lifted from Sleeping Beauty! The entire dance was originally done by Aurora and her Prince. The animators for Beauty and the Beast were running out of time for production and had to come up with a quick solution.

Disney’s Princesses usually sing in a very high Soprano register and Salonga showed off her talents by reaching a F5 for both roles. If you have no idea what that means, it’s the glass breaking stuff!

8. If you look carefully at the official Disney Princess graphics, you’ll notice that they don’t look at each other.

There is a reason for this! The only way that Roy Disney, nephew of Walt, would agree to create this group was if they were not aware of each other. After all, they don’t know each other! Also, Cinderella is usually drawn front and center, as she has been chosen as the “unofficial” leader of the group.

9. Ariel is the only Disney Princess to have a child!

Melody, the human who longs to be a mermaid, is the leading lady in the sequel to the Little Mermaid, which was surprisingly adorable. We won’t ever see Melody as an official Disney Princess; she was not in the original film.

10. There was controversy of an update to Merida ‘s appearance in 2013.

Her waist was thinned out, her hair tamed and her eyes were given a dark top layer of eye liner. In fact, she looked like the 25 year old version of the tomboy, spunky free thinking Merida we know in Brave. Many complaints stated that Merida actually helps many young girls accept themselves while in the awkward transition ages of tween to teen. Disney responded that they will use both versions of Merida in the future.

2015-02-15
Lauren Wallis
Previous: 6 Things You May Not Have Tried At Walt Disney World
Next: 6 Must Do’s On Main Street In The Magic Kingdom