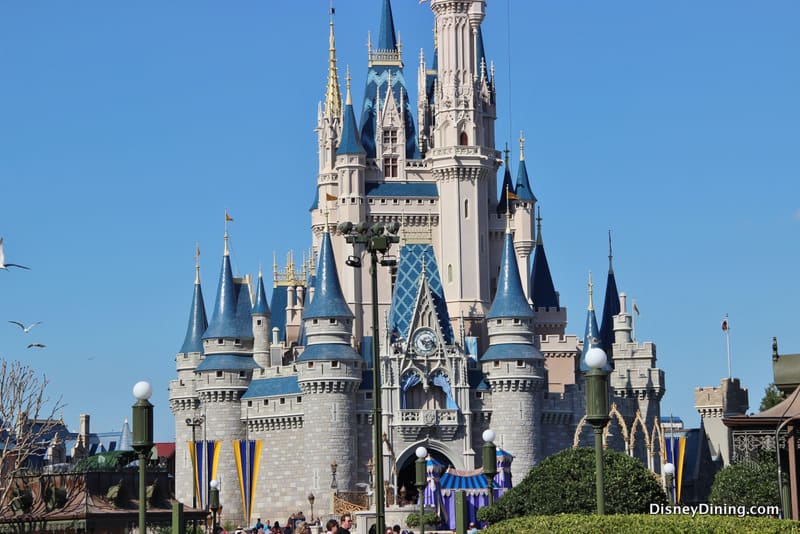 When most people think of Walt Disney World, the Magic Kingdom comes immediately to mind. It’s considered by many to be the heart of the Disney magic. The centerpiece of the Magic Kingdom is Cinderella Castle, it’s an icon that is recognized all over the world. Here are ten things to love about the Magic Kingdom.

From the first glimpse of Cinderella Castle, you’ll know that you’ve stepped into a different world. Each land at the Magic Kingdom is different and the themes play well with the name of the land. In Liberty Square, for instance, you’ll feel like you’re walking through Colonial America, but across the park in Tomorrowland you’ll instead be immersed in yesteryear’s vision of the future. The details in each land are amazing, so take your time and explore instead of hurrying through.

9) Ways to Escape the Heat

It can be hot in Florida at any time of year. There are plenty of open spaces at the Magic Kingdom, but there are also ways to get out of the sun, heat, and humidity. Watch classic Disney characters and scenes in Mickey’s PhilharMagic, or help power Monstropolis with Monsters, Inc. Laugh Floor. Enjoy an indoor ride such as Space Mountain. Grab a meal in an air conditioned restaurant, or cool off with ice cream. Beat the heat by getting wet on Splash Mountain or head to Casey Jr. Splash ‘N’ Soak Station; you know you want to join your kids in the water. These are just a few of the ways that you can escape the Florida heat at the Magic Kingdom.

The special events at the Magic Kingdom are spectacular. When these take place the park will close early and a separate ticket is required to attend the event. Night of Joy is actually two nights in September. The hottest acts in Christian music are featured. Not too long after that Mickey’s Not-So-Scary Halloween Party starts on select nights. It’s a kid friendly party that your whole family will enjoy. When that wraps up it will almost be time for Mickey’s Very Merry Christmas Party. Mickey’s parties include a parade, special characters, fireworks, and more.

Walt Disney loved trains, and you can share in his love for them at the Magic Kingdom. You can take a ride around the park on the Walt Disney World Railroad. Use the journey to relax for a little while, or you can use the train as transportation. It stops in Frontierland, Fantasyland, and Main Street, U.S.A. You and your family can ride in a different type of train with Tomorrowland Transit Authority PeopleMover. If you like the transportation of years gone by, you might also want to check out Main Street Vehicles. They’re not trains, but they are forms of transportation that your whole family will love.

Festival of Fantasy at the Magic Kingdom is so popular that there are FastPass+ viewing areas for it. It will bring many of your favorite characters up close in a joyous setting. You’ll see characters from classics such as Cinderella, and newer favorites like Anna and Elsa from Frozen. It is a must see for any Disney fan.

There are some amazing dining options at the Magic Kingdom. If you want character dining, you can choose from Winnie the Pooh and friends or some of the most popular princesses. If you’re looking for something quick there are plenty of options. You can also dine on a traditional Thanksgiving dinner, enjoy spaghetti and meatballs right out of Lady and the Tramp, or pick a room in Beast’s Castle. There are numerous places to eat at the Magic Kingdom, you’re sure to find something to satisfy your hunger.

Arguably the most famous fireworks show on the planet is held on most nights at the Magic Kingdom. Wishes Nighttime Spectacular is narrated by Jiminy Cricket, and it will make you believe in magic. The show is visible in most spots throughout the Magic Kingdom, although Main Street, U.S.A. is the most popular place to watch. If there is a special event taking place Wishes will not be held, although some special events include a different version. After the show is over the park will clear out, if you’re not in a hurry hang back so that you won’t be caught in the crowd.

There are three thrill rides at the Magic Kingdom with the word “mountain” in the name; Splash Mountain, Big Thunder Mountain Railroad, and Space Mountain. Seven Dwarfs Mine Train takes you inside a mountain, so it is included in this category as well. Space Mountain is a dark roller coaster that blasts you off into space. Big Thunder Mountain will take you on “the wildest ride in the wilderness”. Splash Mountain ends with a five story drop, you will get wet! Seven Dwarfs Mine Train is a family friendly roller coaster that takes you inside a day in the life of Snow White’s best friends. The four mountains are four of the most popular rides at the Magic Kingdom.

There is something for everyone to do at the Magic Kingdom. While some rides do have height restrictions, there is plenty that those under 32 inches can ride. Kids of all sizes (and ages) will enjoy the variety of attractions that don’t have height restrictions. Everyone can also meet characters and watch the shows, parades, and fireworks. You and your whole family will be able to spend an entire day at the Magic Kingdom without running out of things that everyone can enjoy.

Since the Magic Kingdom was the first theme park to open at Walt Disney World, it is where you will find many of the classics. Rides such as It’s a Small World, Dumbo the Flying Elephant, and Pirates of the Caribbean just scream “Disney”. Space Mountain, Jungle Cruise, and Haunted Mansion are other rides that are immediately associated with Disney parks. Take the time to visit a “great big beautiful tomorrow” in Walt Disney’s Carousel of Progress. It was created by Walt himself for the 1964-1965 New York World’s Fair. Country Bear Jamboree is another attraction that Walt worked on. The Magic Kingdom is filled with classic characters as well. The park is indeed magical.