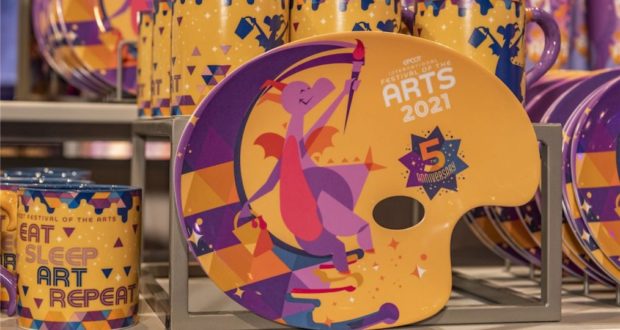 Taste of Epcot International Festival of the Arts Media Event

My favorite festival at Epcot has always been the Flower & Garden Festival, but Festival of the Arts has become a very close second. This year, the modified version is called the Taste of Epcot International Festival of the Arts. On January 12 I was part of a hosted media group. We were invited to learn more about Epcot’s newest festival. It wasn’t my first time visiting this year, but I did have a chance to see some of the things that I missed earlier, plus I picked up a few important pieces of information.

Our event started with a bit of non-festival news. A new exhibit is coming to the American Adventure Pavilion! It will be called “The Soul of Jazz: An American Adventure”. It will feature Joe Gardner from the Pixar and Disney movie “Soul”. It will celebrate the history of jazz across the United States. Disney is working with some of the top jazz museums in the country on the exhibit. It will debut in February.

We were treated to a session of Visual Art in Performance. This is one of my favorite parts of Festival of the Arts. Artist Trevor Carlton takes an almost blank canvas and turns it into a classic character. It’s fun to try to figure out which character he’s creating! This time around it was Goofy who appeared. The show is high energy, with lots of music. Visual Art in Performance usually takes place on Thursdays through Sundays. Check the Festival of the Arts section of the My Disney Experience App for times. When I went last week the times weren’t yet on the app, but they have since been added.

Another performance that we saw was Art Defying Gravity. This show is filled with many “wow” moments. We watched a female acrobat perform feats that most people would never be able to do in their dreams. Her level of concentration was amazing. Art Defying Gravity takes place daily, and the showtimes are listed in the Festival of the Arts section of the My Disney Experience App. Both Art Defying Gravity and Visual Art in Performance take place in the World Showplace building, which is between Canada and the United Kingdom.

The final performance we saw was Voices of Liberty. While we saw them inside World Showplace, their normal show takes place in the America Gardens Theater. This should be at the top of your must-do list for the Taste of Epcot International Festival of the Arts! The current show is called “The Disney Songbook”, and it features some of your favorites. Listening to their perfect harmonies on “When You Wish Upon a Star” was even better than I expected it to be, and I had high expectations. Voices of Liberty also perform daily.

The extra food kiosks for the Taste of Epcot International Festival of the Arts are called Food Studios. There are over a dozen this year, with both returning dishes and new offerings. I sampled Remy’s Ratatouille from Festival Favorites, Pistachio Cake from The Painter’s Palate, and Tomato Soup with Grilled Cheese from Pop Arts. The soup comes in a small collectible container.

There is a nice selection of festival-themed merchandise. Since this is the fifth festival, much of it has the number “5” on it. If you like MagicBands, there are two limited edition choices, although one of those is exclusively for Passholders. The MagicBands are limited to 2,000 each. Other Passholder exclusives include a pin and a T-shirt. Figment is featured on much of the merchandise, and you might notice Dreamfinder as well.

I had a chance to talk to Will from merchandise about the artwork that is for sale this year. The featured creation is Mushu at the China Pavilion. This fun piece is available in different forms, including as a print or framed. Will also told me that this is the first year that there is a booth that features Marvel artwork. Paintings based on “Star Wars” and Disney are also sold in several places.

The Paint-By-Number Mural has returned this year, but it’s in a different spot. Look in Future World West near The Land Pavilion. It’s on one of the construction walls. Social distancing is being observed, to allow everyone to participate safely.

Other construction walls are being put to good use. Many of them have butterfly wings, making for great picture opportunities. There are also Figment wings and horns. What I like about both of these is that this year some of them are lower. That means that kids can easily get in on the fun. Another construction wall that you won’t want to miss is called Drawing on Inspiration. Imagineers Jimmy Pickering and Morgan Lee Richardson have added their takes on former and current Epcot offerings. It’s interesting to see the different interpretations of the same attractions.

The Chalk Art Galleries are located on the bridge to World Showcase. Check on both sides, because they are not to be missed. The amount of work that goes into each picture, knowing that it won’t last, is amazing. You also will want to check out the photo opportunities where you can become part of a famous piece of art.

One final thing that I’d like to mention is Figment’s Brush With the Masters. This is the scavenger hunt for the festival. You can learn about art as you search throughout World Showcase! The prize this time is a little bit different. You can pick one of several character pop-up puzzles. While doing the scavenger hunt is the best part, you don’t have to complete it to redeem the map for your prize.

I’ve been to the Epcot International Festival of the Arts each year since it was first introduced, and it just keeps getting better. I do miss some of the things that can’t take place this year, but overall it is a blast. There are many delicious food choices, great entertainment, and visual art in many different forms. In a world that is filled with uncertainty, this is such a nice break from reality. If Festival of the Arts continues to be this incredible, it just might pass Flower & Garden as my favorite festival at Epcot.