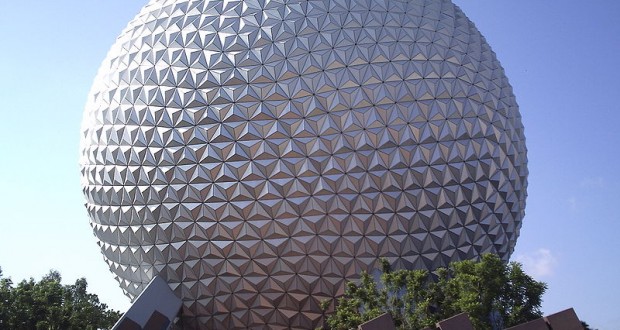 No one likes to hear that it might rain while on a Walt Disney World vacation. After all, Florida is the Sunshine State, right? The fact of the matter is that it rains a lot in Florida, especially during the summer months. Strong storms will move in most days and then will move out as quickly as they arrived. It makes sense to know where to go if the weather turns bad. You can get out of the rain and plan your next move at the following attractions.

Although not listed here, live indoor shows are a great place to head if the sky grows dark. There are also plenty of indoor rides that are not listed here. These rides and attractions made the list mostly because of their length. Some may not be the most exciting rides that Walt Disney World has to offer, but they are a good place to hide out when a storm moves in. If the storm looks like it might not pass quickly, think about finding an indoor ride with a long line. Toy Story Midway Mania!, Space Mountain, and some other popular indoor rides also have indoor queue lines.

If this article was about how to embrace bad weather instead of escape it, Kali River Rapids would be the top answer. If you’re going to get wet anyway, why not have a great time doing so? On Kali River Rapids you won’t just get wet, you’ll get soaked. You’ll have such a good time that a little bit of rain won’t make a difference.

DINOSAUR is the shortest ride on this list, lasting just a little over three minutes. It is still a great place to head if it rains, because much of the queue line is indoors as well. There is also a gift shop at the end, so if the rain is still coming down you can stay inside until the weather clears.

It’s a Small World is a great ride to run to if it looks like the sky is about to open up. The ride lasts approximately 12 minutes long and it’s a Disney classic. Sit back and enjoy the song, you know all the words. If the rain is still coming down get back in line again once your ride is over. The line usually isn’t very long.

5) The Hall of Presidents

The Hall of Presidents isn’t on everyone’s must-do list when they visit Walt Disney World, in fact many people hurry right by. If it looks like it is going to rain, the attraction can offer a welcome dry haven. The show lasts 23 minutes, just enough time for a quick summer storm to pass. The best part about it is that The Hall of Presidents is interesting and educational. The audio-animatronic presidents are so lifelike that you’ll think that they’re actors. All of the presidents are represented. Even if it’s not raining, you should consider stopping by.

The icon at Epcot is also a great place to escape bad weather. While most of the queue line is outdoors, it’s covered so you’ll still be protected unless the wind is blowing. Once you’re seated inside the ride you’ll be able to sit back out of the rain for 15 minutes. If it’s still raining once the ride is over you don’t have to head back outdoors. Spend some time exploring Project Tomorrow. You and your family can play games, learn, and stay dry all at the same time. You might enjoy the games so much that you won’t want to head back outdoors until long after the storm has passed.

It used to be that you could usually walk right onto The Great Movie Ride, but with FastPass+ the lines have grown longer. That is not a bad thing if it looks like it is about to rain. While on extremely busy days part of the line might be outside, your wait will mostly be indoors. You can see movie costumes while you wait, and then watch trailers from movies that are represented during the ride. Once you’re in your slow moving train you can sit back and stay out of the rain for 22 minutes. By the time your ride is over there might be a rainbow outdoors.

Ellen’s Energy Adventure is great if it looks like it’s about to rain. You might also want to check it out if you need a break from the heat or the kids need a nap. The premise of the ride is simple, Ellen DeGeneres has a dream that she’s a contestant on Jeopardy, and she needs the help of Bill Nye the Science Guy to learn about energy and win the game. The pre-ride area is indoors, and then you’ll board trains and head into Ellen’s dream. The entire thing lasts about 45 minutes! That’s plenty of time for a storm to pass.

Walt Disney: One Man’s Dream is easy to rush by on the way to Toy Story Midway Mania!. It should also be a place that you stop, even if the weather is nice. You’ll be able to learn more about the incredible man who started it all. The first part of Walt Disney: One Man’s Dream is a museum. You’ll see pictures, Disney artifacts, and even Walt’s second grade school desk. There are ride models, costumes, and more. All of the items will give you a glimpse into the man and his vision. After you’ve spent as much time as you want in the museum area, head in to see the 15 minute film. It’s hosted by Julie Andrews, and it’s a wonderful tribute. If you’re trying to escape the weather, find a seat near the entrance to the theater and watch the film. If it’s still raining when the film ends, scoot down the same row and watch it again. The theater is rarely crowded, and you’ll be able to stay dry for a little while longer.