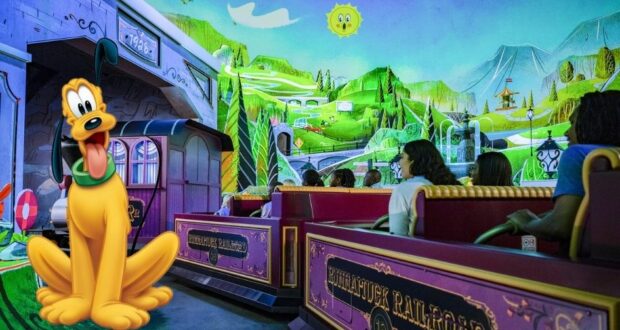 The Walt Disney World Resort property is service animal friendly. From a service dog to a service miniature horse, as long as the animal is trained to work to assist with an individual’s disability, it is allowed. In this situation, it seems like a service dog caused an attraction to stop mid-ride as Cast Members thought it was a child.

At Disney’s Hollywood Studios, attractions such as Alien Swirling Saucers, Rock ’n’ Roller Coaster Starring Aerosmith, Star Wars: Rise of the Resistance, and The Twilight Zone Tower of Terror are just a few of the attractions on the restricted list. Mickey and Minnie’s Runaway Railway however is a YES for service animals.

A Disney Guest and her service dog, Ezzie, accidentally caused the popular Runaway Railway attraction at Walt Disney World to stop mid-ride, as Cast Members thought the pup was actually a child.

RELATED: Captain America Sends a Special Message to a 6-Year-Old Boy Who Saved Sister from a Dog Attack

@poodles_and_crafts took to TikTok to post a video with the comment, “just being a good girl and giving Disney workers heart attacks #disneyworld #servicedog #notachild”. The video comment includes, “The time my dog caused a safety issue and they stopped the ride because they thought a kid had gotten out but she just laid back down.”

Kelci Grupe (@poodles_and_crafts) goes on to say during the video, “So, we’re stopped right now because apparently they thought Ezzie was a person and they kept telling her to sit right in the seat face forward and underneath the lap bar. Oops.”

It sounds like the Cast Members were doing their job, keeping Guests safe. If Ezzie was a child and out out of her seat, this could cause a safety issue.

The brief video of the incident is making its way around TikTok with over 18.5k views. Check it out below or find it here:

Oops! Well, we’re sure this is one of those scenarios that is inevitable at times. We’re thankful the Cast Members were doing their jobs and that Ezzie was still able to enjoy the attraction with her owner.