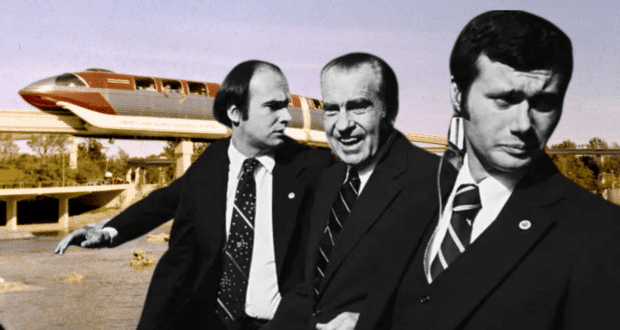 In June 1959, Vice President Richard Nixon was abducted at Disneyland

On a warm summer Sunday in 1959, the unthinkable happened. Then-Vice President Richard Nixon was kidnapped at Disneyland, and Secret Service agents who had been by his side only moments before were completely blind-sided. 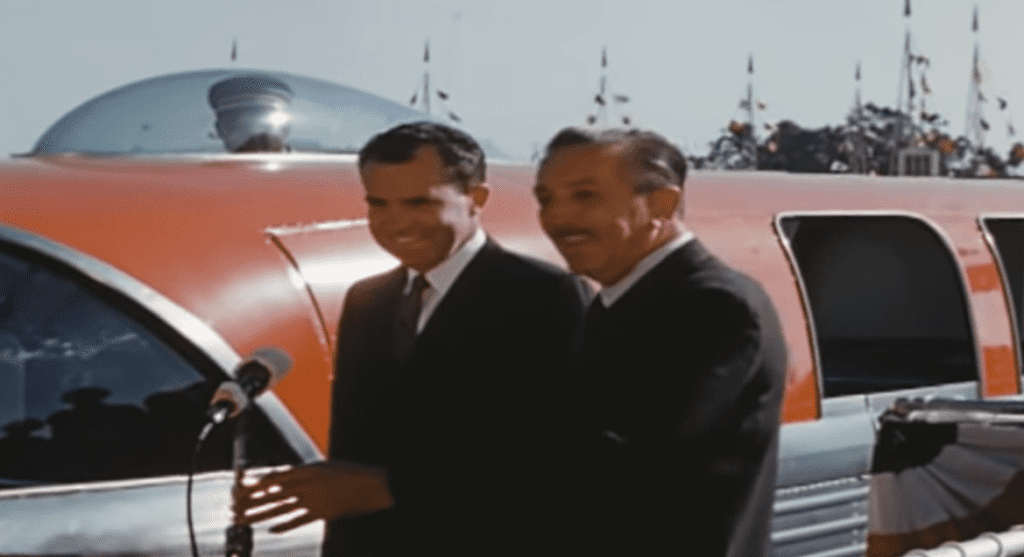 It was Sunday, June 14, 1959, and Monorail Red had yet to cooperate with Imagineers. She was scheduled to be dedicated that afternoon, and Walt Disney had written a personal letter of invitation to Mr. Nixon and his family, welcoming them to take part in the dedication. The Nixons accepted, but Imagineers were unsure about the outlook for the dedication because during every single test run in the days leading up to that fateful Sunday, Monorail Red had done something unique to prove she had a mind of her own. 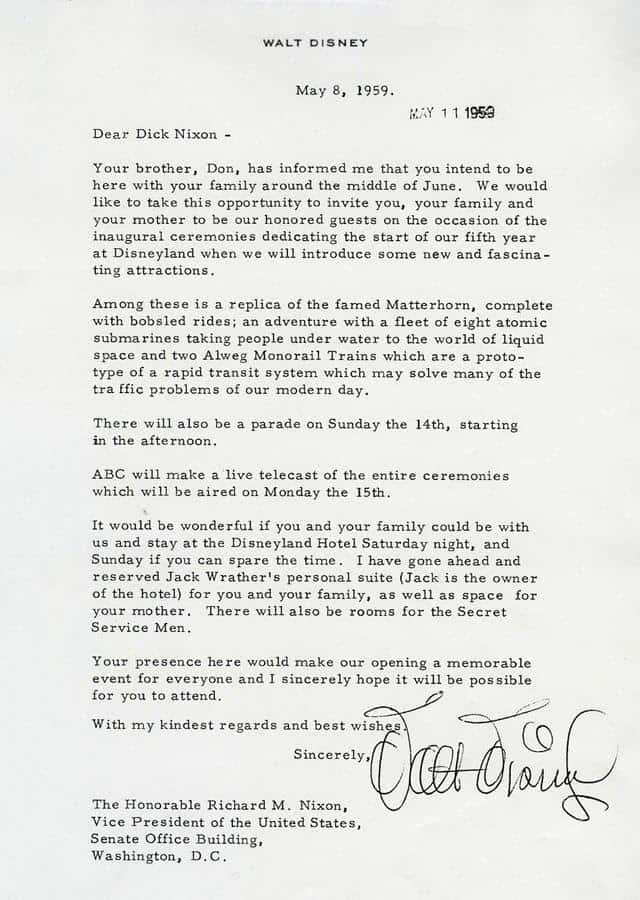 Taming her would be no simple feat–not even for the likes of 28-year-old genius Imagineer Bob Gurr, whose only job that day was to ensure Monorail Red left the Tomorrowland Station at Disneyland, allowing television cameras to get shots of the futuristic new Disney train making its elevated journey high above Guests and attractions at Disneyland Resort in California. The day’s events would be televised the next day, June 15.

According to WaltDisney.org, Gurr and a German engineer, Konrad Deller, worked tirelessly with the rogue Monorail, leaving the park and heading to the Disneyland Hotel for dinner every night leading up to the dedication.

The dynamic duo would then reconvene in Deller’s hotel room afterward and spend hours sketching out replacement parts for the train. Around midnight each evening, a courier would arrive, pick up the sketches, and rush them to Burbank, where teams of engineers at Walt Disney’s Studio Machine Shop would work through the night to create the replacement parts based on Gurr’s sketches. 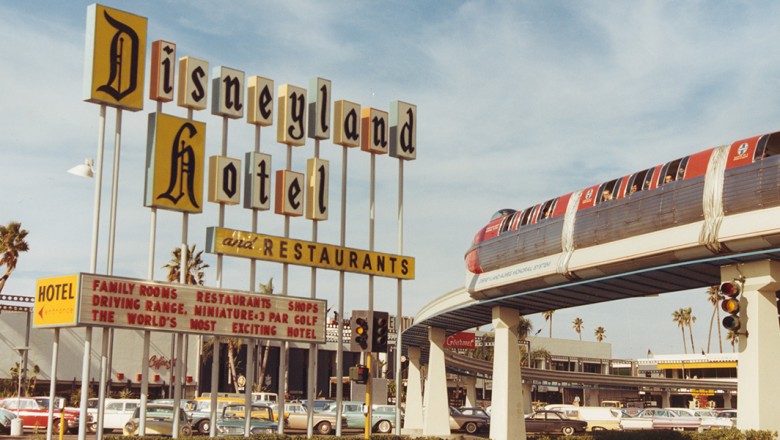 Each morning following a creative meeting of the minds at the Disneyland Hotel, Gurr and Deller would receive the necessary parts and install them in the hopes of curbing Monorail Red’s mischievous tendencies, only to have her fail again later in the day. Then, miraculously, on the night of June 13, Monorail Red made her first successful lap around Tomorrowland without faltering, without failing.

On Sunday, June 14, Bob Gurr was prepared for the dedication of Monorail Red at Disneyland as he had parked the train in the station. Surely encouraged by the train’s performance the night before, Gurr felt ready for the events of the day ahead.

“I set it there so we could get a shot for the television cameras,” Gurr explained in an interview. “That was the focus. All I had to do was drive it out of the dedication shot. It could burn up [afterward], but the TV people would’ve had their shot.”

Thankfully, despite her previous behaviors, Monorail Red was a gem of a train that day. She didn’t burn up. She didn’t waver. She didn’t stray from the plan. She didn’t fail. In fact, she performed just as expected, and maybe even better than expected. But the unexpected still happened, and it happened with Bob Gurr at the wheel. 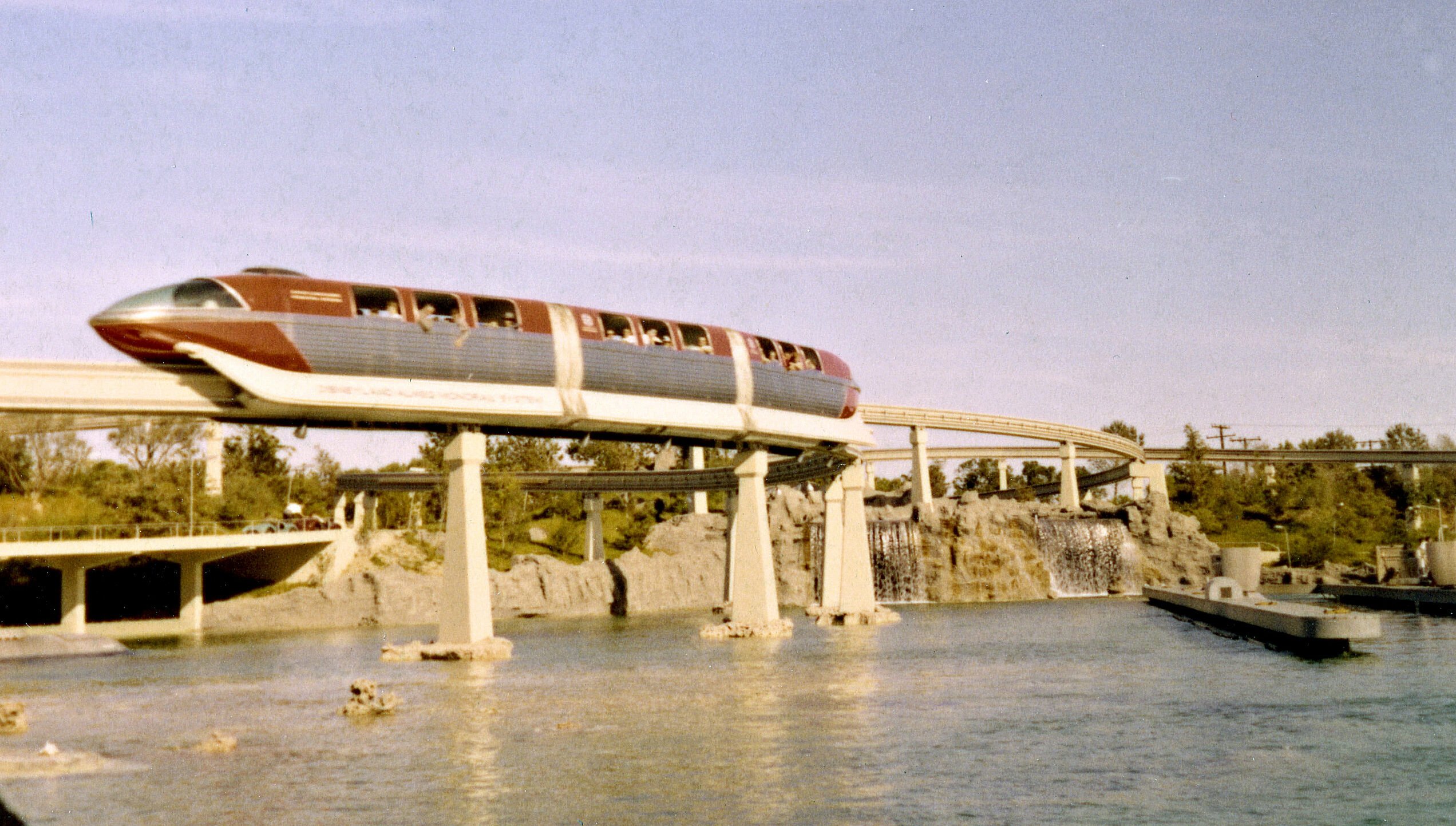 The moment Gurr began to feel like he could trust the beautiful new Mark I red Monorail, and that the day might just go off without a hitch, he says that “the entourage” showed up, and we’re not talking Mickey and the gang.

The visionary himself, Walt Disney, walked up to the monorail, and in his company were then-Vice President Richard Nixon, Nixon’s daughters, Julie and Tricia Nixon, television’s Art Linkletter, members of the Disneyland Security Team, and Mr. Nixon’s Secret Service team. Most of the “entourage” boarded the monorail–everyone except Disneyland Security Cast Members. Gurr powered up the monorail. It was the middle of June in California, and he wanted to be sure the cab of the train was cool for the short journey he and the entourage were about to make. 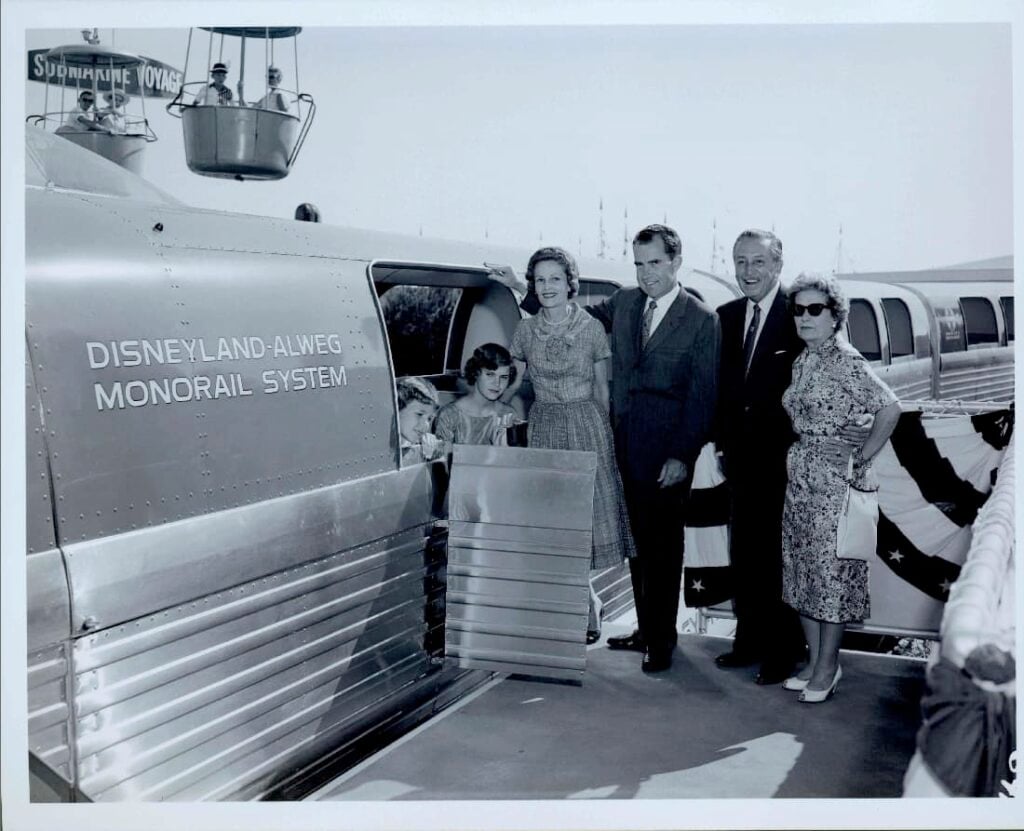 Whether Gurr was ready for it or not, Walt called out to him: “Let’s go.”

Gurr was terrified as he took the helm of the contrary monorail and began to guide her down the single track. The train’s previous performances that week had created a sense of anxiousness within Gurr; what if she failed while Walt and Mr. Nixon were on board? What if she failed in front of the vast television audience the Disney brand had built up to that day?

But to Gurr’s probable delight and relief, Monorail Red performed just as she had been designed to perform. Gurr’s worries had been without cause. Or so he thought until he noticed Mr. Nixon looking back to realize that the Secret Service agents who were assigned to him were nowhere to be found. The terrifying truth was staring down at Gurr like a hawk staring down a field mouse: the agents hadn’t been able to board the train before Gurr heeded Walt’s command and directed her away from the loading platform.

But what could Gurr do?

He did the only thing he knew to do; he just kept driving, but because of his anxiety over the Nixon-sans-Secret-Service-scenario that day, the Monorail loop must have felt like a 40-mile stretch. So when he pulled up to the Tomorrowland Station and the monorail hadn’t failed, and no one had attempted an attack on Mr. Nixon without his agents around to protect him, Gurr breathed a hefty sigh of relief. 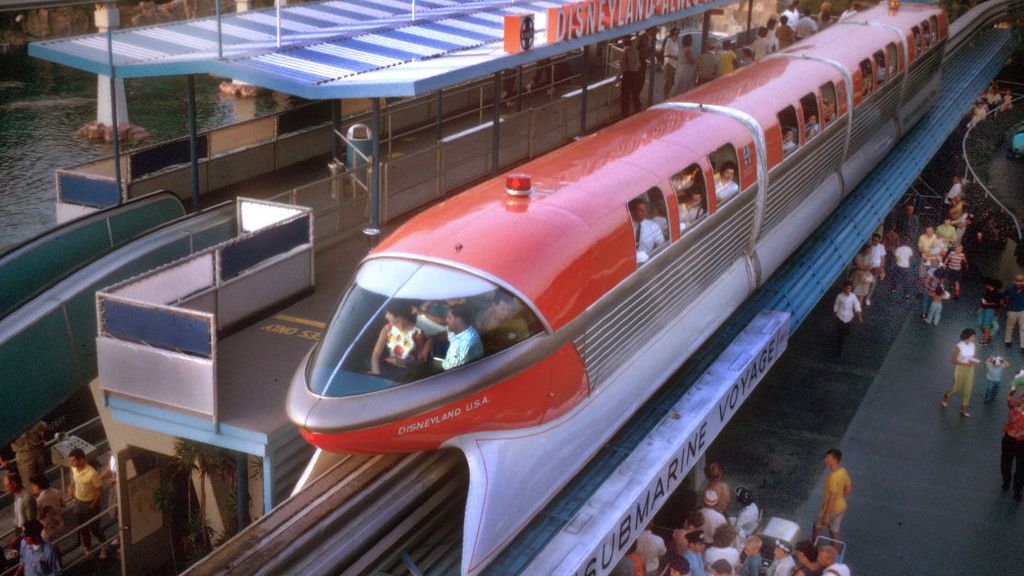 But that sigh of relief was the predecessor to a gasp of anxiety. No sooner had Gurr pulled up to the station, thus fulfilling his role that day, than Nixon’s daughters cheered, “We want to go again,” to which Walt responded, “Bobby, give ’em another ride.”

Gurr’s eyes must have been as big as saucers. 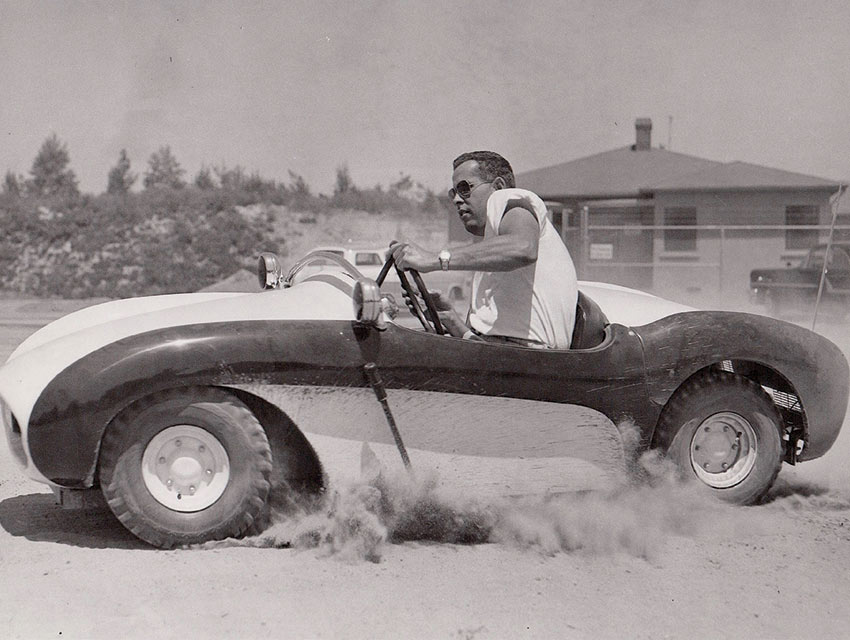 But while Walt was readying him to give Nixon’s children another lap around the loop, Gurr grew increasingly preoccupied with the image of Secret Service agents running alongside the monorail playing out before him as he followed Walt’s instructions to pull out of the station in a take-two of the Monorail tour.

“[The agents] were trying to run towards me as I was coming in,” Gurr said. “And then when I sped up to keep on goin’, they were running trying to jump [into the Monorail].” 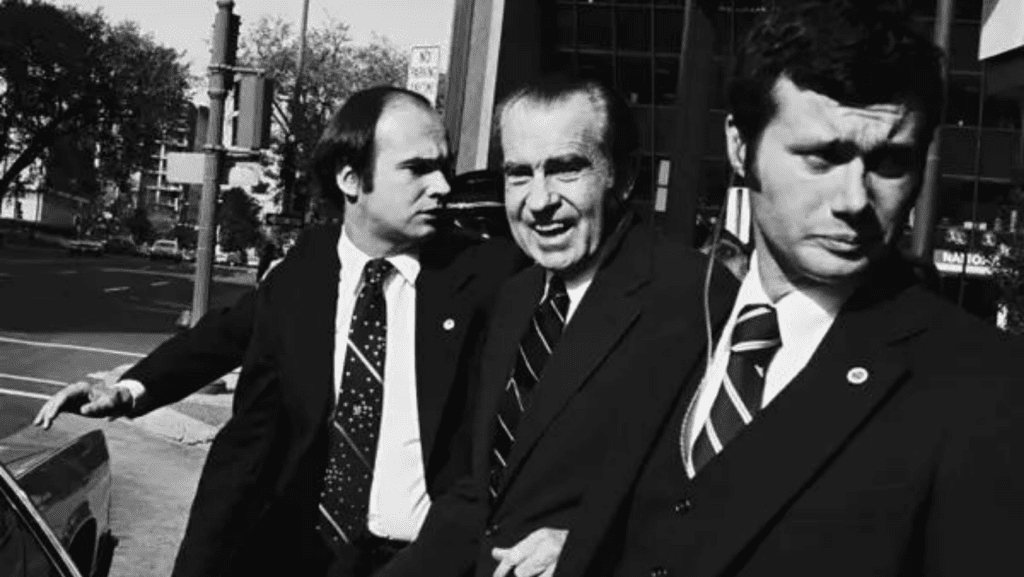 What a spectacle it must have been as Secret Service agents risked it all to catch up to Monorail Red–not because she had gone rogue and bolted out of the station on her own whims, but because the Vice President of the United States was on board, sans agents, and Gurr was willingly powering the train. The spectacle grew more terrifying or hilarious, depending on the pay grade and title of those watching, however, as the doors of the train weren’t even open. It was physically impossible for the agents to breach the train. 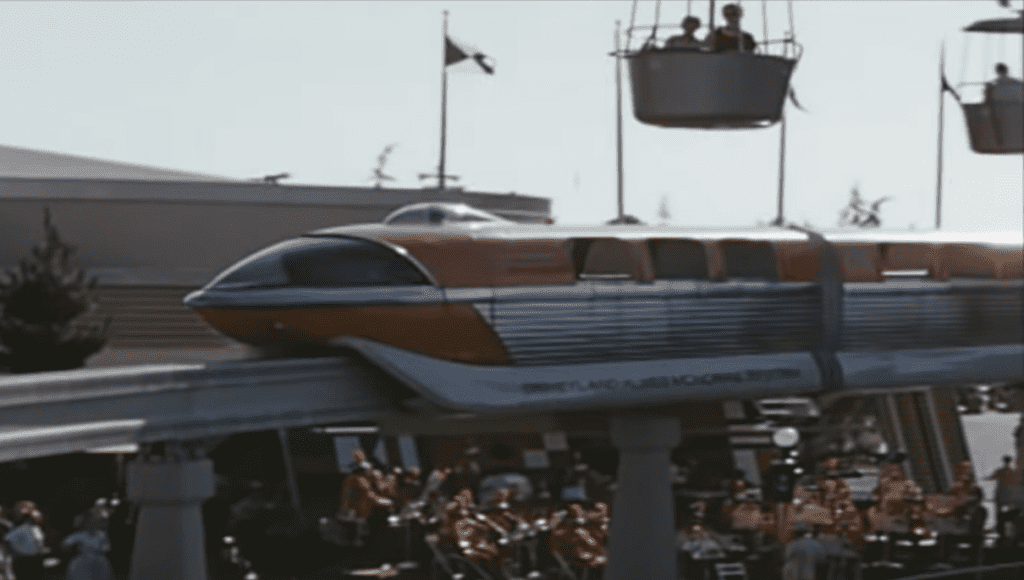 “[The doors] were closed,” Gurr reminisced. “There was no way they were gonna do that.”

Gurr was in a bit of a panic, but according to his recollection, Mr. Nixon quite enjoyed the hilarity of the moment.

“Nixon got a kick out of it,” Gurr remembered. “[Vice] Presidents always try to escape [the Secret Service]. The fact that he now knew he got rid of ‘em!”

Gurr also seemed amused by the memory of Nixon escaping his assigned agents: “To my great horror,” he said. 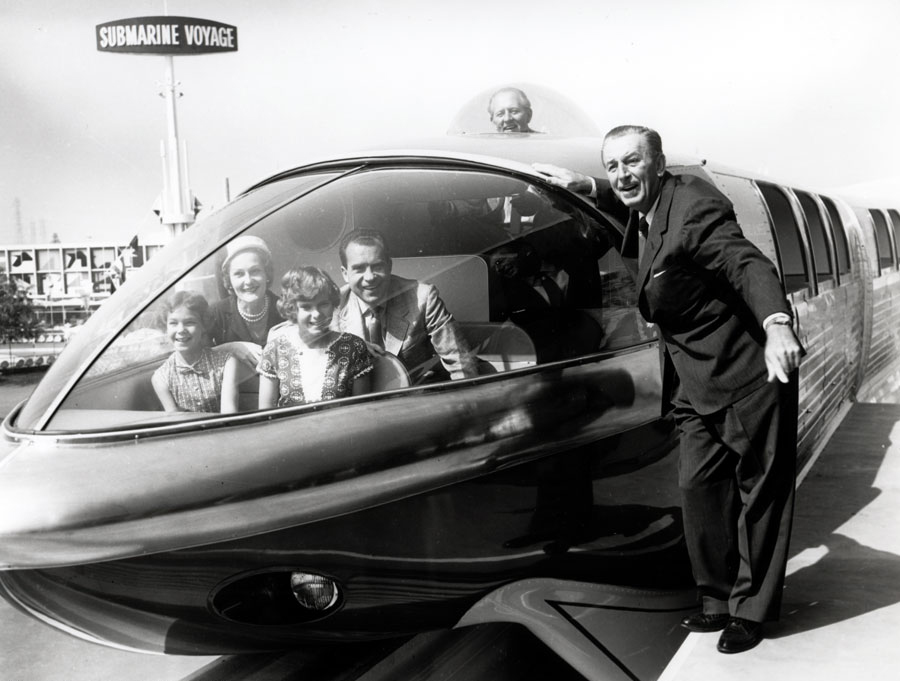 Gurr recalls that Walt himself was having a great time. “When there’s something that he’s got, and nobody else has got it, he’s a very proud papa,” Gurr spoke about Walt. “He was in an extremely good mood. The eyebrows were up, and when he was in those moods, he was really memorable.”

Perhaps the biggest snafu of the day–aside from a Walt Disney Imagineer abducting the Vice President of the United States–was that someone forgot to ensure that the giant scissors with which the shiny ribbon was cut during the dedication were sharp enough for the job. They were not, so Walt had to tear the ribbon with his bare hands while cameras documented the scissor shortfall and Nixon and company looked on. 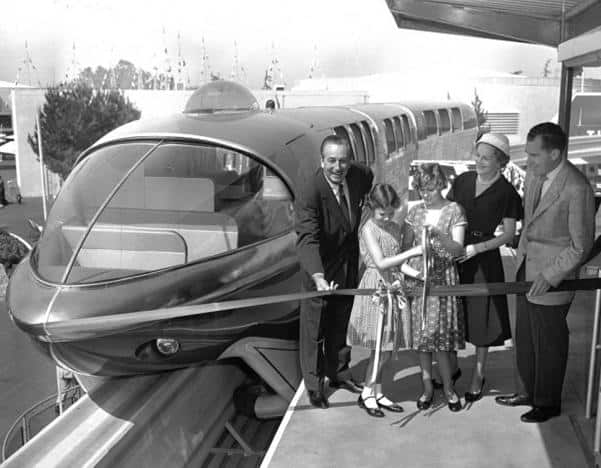 Thankfully, no Imagineers were injured in the dedicating of Monorail Red at Disneyland that day. It’s just lucky for Bob Gurr, Walt, and Mr. Nixon that those particular agents had a sense of humor and understanding, and that Monorail Red behaved herself. Otherwise, June 14, 1959, might have ultimately trumped “Black Sunday” as the darkest day in Disneyland history.