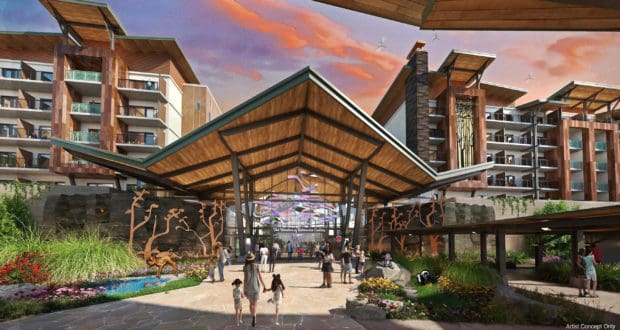 Reflections: A Walt Disney World Lakeside Lodge – What We Know So Far

With all the recent changes to Walt Disney World, we’re eagerly awaiting our next WDW trip, when we can try out all the new restaurants and attractions that have opened since our last visit.  While many changes continue to be made inside the parks, WDW resorts are not immune to the constant improvements on property, and that’s a good thing!  If you haven’t heard the news, there will be a brand-new Disney resort making its appearance in a few years – and we have all the latest info right here!

It’s called Reflections: A Disney Lakeside Lodge, and when it’s completed, it’ll be the 16th DVC property.  A deluxe resort, it will boast over 900 resort rooms and Disney Vacation Club villas, and a pretty cool location!

2022 is the expected year for the opening of Reflections – A Disney Lakeside Lodge, so we still have a few years to wait!  There are several other Disney resort projects currently in the works in WDW, and this means we’ll have more than 1700 new resort rooms and villas to enjoy when all is said and done.

You may remember visiting Disney’s River Country, WDW’s first water park, before it closed in 2001.  Or you may have been intrigued by the idea of an abandoned Disney park (and who could blame you?), and followed the rumors that have been swirling for years about the future development of the site.  Well, they’re rumors no longer!  Reflections – A Disney Lakeside Lodge will be built on the site of River Country, between Disney’s Wilderness Lodge and Fort Wilderness, on Bay Lake.  We love the idea of taking a former Disney park that has been rotting away, tantalizingly close to current WDW magic, and turning it into a resort for new generations to enjoy.

We know that A Disney Lakeside Lodge will be themed to complement its natural surroundings.  It’ll be inspired by nature and by the artistry of Walt Disney.  Wimberly, Allison, Tong & Goo, the design team that brought us Disney’s Grand Floridian Resort & Spa, as well as several Disney hotels in other countries, helms the project.  It seems like Disney is aiming to please as many guests as possible, not just the biggest WDW fans out there, who want to be surrounded by all things Disney at their resort; Lakeside Lodge looks like it will be a more subtle, understated hotel, with natural and rustic touches.

We don’t know too much about the food at Reflections: A Lakeside Lodge, but what we do know is pretty exciting.  Plans show a proposed table service restaurant that will be part of a building that juts out from the shore of Bay Lake.  If you love waterfront dining (and who doesn’t?), you’ll love this stand-alone restaurant.  We can only imagine that the view will be spectacular!

We also recently discovered that the restaurant will be themed around The Princess and the Frog!  If it’s anything like the beautiful restaurant Tiana’s Place on board the Disney Wonder, it’ll be quite a stunner.  There will be a counter service restaurant in the resort’s main building, and guests will be able to head over to nearby Fort Wilderness or Wilderness Lodge to access even more dining options.

Concept art depicting the lobby has been released, and what we’re seeing is a wonderfully light and modern space featuring lots of glass, whimsical flowing ceiling decorations (that might be meant to represent wind?), and carved wood to break up the more contemporary materials.  It won’t look like Disney brought the forest inside the resort, like Wilderness Lodge; it’s a more liberal interpretation of “inspired by nature” that reads more like a peaceful nature retreat.

There’s a Pocahontas statue in the lobby, complete with windswept hair, and huge windows that promise to let in a ton of light.  The intimate spherical structures surrounding different seating areas are wonderfully creative, and seating includes sofas in nature-inspired hues.

While Reflections: A Disney Lakeside Lodge won’t be completed until 2022, that’s not to say you can’t get a glimpse of the construction phase of the project!  If you head towards Trail’s End at Fort Wilderness, you’ll see some of the fencing near the bus stop.  Anything that remained of River Country has already been demolished, and the land flattened.  The whole site is fenced off, and you’ll be able to see some of the fencing at the edge of Trail Blaze Corral.

We love the fun extras in the concept art, like hanging nest chairs and landscape scenes from Disney animated films.  Fans of mid-century modern furniture will appreciate the design choices used here, and Disney characters will be subtly worked into backdrops (of unfolded Murphy beds, for example) and furniture.  There are retractable side tables in beds and sofas, and plenty of storage built into each piece of furniture.  So even though the design is minimalist, you’ll definitely have enough room for everything you need while you’re on vacation.  Oh, we can’t forget one of the most exciting elements of Reflections: A Disney Lakeside Lodge – there’s a fireworks viewing lounge!