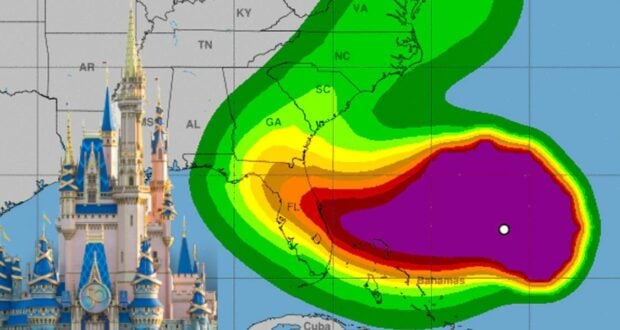 The current Subtropical Storm Nicole has begun to pick up strength as of Tuesday, November 8, 2022. The storm is brewing in the Atlantic Ocean with a shift that is taking aim at Central Florida and Walt Disney World Resort.

We previously shared the Monday update that the National Hurricane Center was forecasting the potential strengthening of Subtropical Storm Nicole. As the morning report was released for November 8, we’ve learned Nicole’s eye is more defined and has the potential to become a Category 1 hurricane.

The storm’s projected path has shifted slightly north, with a landfall closer to Brevard County in Central Florida, which is roughly an hour beach side of Walt Disney World Resort.

Forecasters report, “Nicole is expected to make a transition to a tropical storm later today and begin strengthening, and it is forecast to be near or at hurricane strength by Wednesday and Wednesday night while it is moving near the northwestern Bahamas and approaching the east coast of Florida.”

Orange County and Osceola County, which includes Walt Disney World Resort and Universal Orlando Resort, are currently under tropical storm warnings that have been issued by the National Weather Service.

If visiting Orlando and its theme parks this week, it is wise to understand the Parks’ hurricane policy, as well as keep a watch on the weather as potential Hurricane Nicole strengthens before landfall.

While we are watching the forecasted path closely, the National Hurricane Center (NHC) warns that the storm could shift unexpectedly.

RELATED: Save a Rainy Day in Walt Disney World With These Activities!

“Do not focus on the exact track of Nicole since it is expected to be a large storm with hazards extending well to the north of the center, outside of the forecast cone,” the NHC stated. “These hazards are likely to affect much of the Florida peninsula and portions of the southeast U.S.”

We will be sure to keep Disney Dining readers updated as we learn more about this storm. In the meantime, check out Walt Disney World’s hurricane policy and keep a close eye on the development of potential Hurricane Nicole.