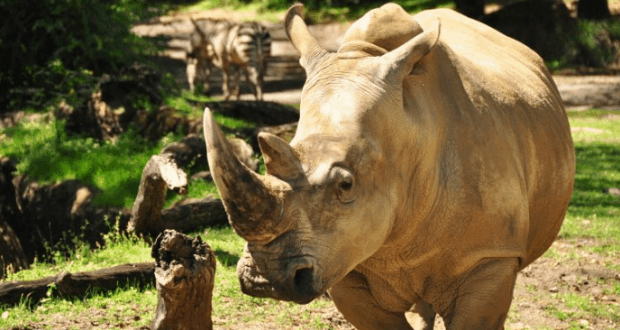 Our Experience: Up Close with Rhinos Tour at Walt Disney World

I am a big fan of the tours and special experiences at Walt Disney World, particularly if you have visited a few times.  These offer a backstage glance, a look at how things work, or an encounter you wouldn’t otherwise get to experience.  These experiences are even more meaningful at the Animal Kingdom with the animal tours.  You really can’t put into words the impact of having an up close encounter with a rare or endangered animal.  And this is exactly what you get to do on the Up Close with Rhinos tour.

I tried for a few trips to get a reservation for this tour, but was only able to secure it when I booked several months in advance.  So if you think you are interested in Up Close with Rhinos after reading about it I recommend that you call 407-WDW-PLAY as far in advance as you can.  The tour is once a day at 11:00am, and the group is small (I think we had 13-15 people on our tour).

The tour is open to almost all ages, so that makes it great for families.  Many of the behind the scenes tours have older age limits.  The minimum age for this tour is 4.  Nearly all of the tour (except your transfer in a van to backstage) is outside, and there are some restrictions on ECVs that you should note.

Now to the fun stuff!  We arrived at the Curiosity Animal Tours stand near Kilimanjaro Safari at around 10:40 for our tour and checked in.  Waivers had to be signed and we were given our name tags.  I would advise a quick bathroom break here because there are no facilities on the tour.

We were lead backstage to board vans that would transport us to the backstage areas of Animal Kingdom where the animals have their barns when they are not on Kilimanjaro Safari.  This is a fun ride as you get to see the “back” of the Safari attraction and several of the animal barns.  Our driver talked to us on the way giving us information on what we were seeing, the Animal Kingdom park in general, and the Rhino we were about to meet.

Once we arrived at the barns we were greeted by two of the Rhino specialists who were going to be conducting our experience.  We visited the inside of the barn to see the huge stalls, and were given some information about the various types of Rhinos throughout the world, their extinction status, and how they are cared for at the Animal Kingdom along with how Disney contributes to protecting them from extinction.

Next we went outside around the side of the barns where we would meet Disney’s male Rhino, “Dugan.”  The rhino was standing right by the railing of his outside area so that we could see him very up close.  Dugan is a young guy, and the animal specialists gave us all kinds of information on him, the female rhinos, and the program.  It was a very informal discussion and we were encouraged to ask questions which the whole group did.  It was fascinating to learn all of this information about these beautiful creatures while standing like 10 feet from one.  My 7 year old asked several questions, and the specialists were very accommodating with the answers, and even gave Dugan one of his stimulation toys to play with when my son asked to see him play.

But, the most amazing part of the experience was the opportunity to touch the Rhino.  This is subject to the animal’s mood on the day of the tour, so they don’t guarantee you will be able to do this as the animals are their first priority.  We were invited to touch Dugan’s back which felt very unusual, kind of rough with small hairs, but tough like leather.  Then we were given the chance to touch his soft spot behind his ears.  Unfortunately, cameras were not allowed backstage.  I completely understand this requirement, but I would’ve loved to have a photo of my son’s face when he touched Dugan the first time.  It is safe to say we were all smitten with him.

After we said our goodbyes to Dugan and the specialists, we boarded the vans to return back to the onstage part of the Animal Kingdom.  The experience was about an hour in total.  At the current price of $40 per person (be sure to check for any eligible discounts like Annual Pass, Disney Visa, DVC), this tour is a bargain for the experience.  I would do it again, and wouldn’t hesitate to recommend it to anyone.  My family consisted of myself, my husband, and my 3 boys ages 20, 16 & 7 . . . we were all equally impressed by the experience.

As a keepsake from the tour you keep your nametag which has a print of a Rhino on the back.  The image was drawn by Imagineer Joe Rohde.  I decided to purchase another souvenir to commemorate the tour and found one of the hand carved wooden rhinos in the marketplace of Harambe to add to my collection.

Have you had a chance to experience the Up Close with Rhinos tour at Animal Kingdom?