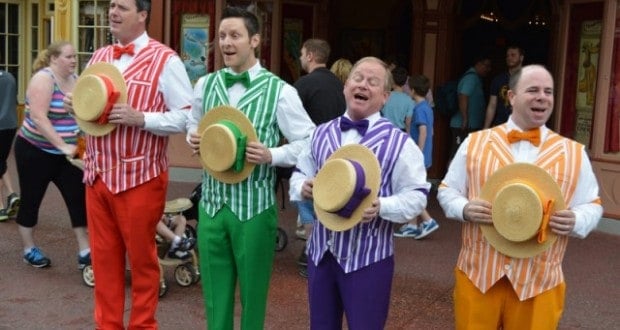 So much of a Disney vacation is spent waiting in line, trying to find ways to pass the time. Street performances are an added bonus at Walt Disney World. You won’t have to worry about lines for a few minutes, you can just watch and have fun. Disney calls it “Streetmosphere”. Some street performers will pick people from the crowd to participate, others will just wow you with their skills. Narrowing this list down to nine was difficult, there are many other talented acts who could have made it. Epcot has several acts that have made the list. That’s because many of the countries have special performances to show their uniqueness and the amount of talent. Pick up a Times Guide when you enter a park to see when these and other acts will take place. If you notice a crowd gathered while on your vacation, head over and take a peak. You’ll be glad that you did.

No one particular act will be mentioned here because they are all amazing. In the evenings Downtown Disney (soon to be Disney Springs) comes alive. Human statues and live classical, pop, and blues music are part of the fun. You might enjoy the entertainment just as much as you enjoy the food and the shopping.

Each evening three world class street performers entertain at Disney’s BoardWalk. There are six on contract (plus some great substitutes) and they rotate nights, so plan to visit more than once. You’ll see jugglers, magicians, and more. The shows are family friendly, and you might be asked to help out. The show must go on, so if it rains look inside the hotel. The acts start at 7:00, and they’re free. You don’t need to be staying at Disney’s BoardWalk to see the entertainment, in fact you don’t even have to be staying on Disney property.

Located in Asia you’ll find a duo known as Chakranadi. The music might sound like background at first, but take the time to stop and listen. You’ll hear a sitar, which is a centuries old stringed instrument that is popular in India. Accompanying the sitar is the tabla, which is an Indian percussion instrument. If you visit during the holidays make sure you stop by. You might hear a new take on a well known classic.

Don’t visit Epcot without heading to the Mexico Pavilion! Mariachi Cobre will make you feel like you’re in Mexico instead of a theme park. This mariachi band performs several times most days, and you’ll want to catch as much of the 25 minute show as possible. You’ll hear singing, guitars, trumpets, and other instruments. Stay after the show is over and take a picture with a band member. Mariachi Cobre is a Walt Disney World classic.

What is Hollywood without actors? These Golden Era performers want you to star along with them. They will improvise their way through the crowds, and they love to interact with anyone who wants to make it in the spotlight. You will find Citizens of Hollywood on Hollywood Boulevard throughout the day. There are several groups that you can interact with, and since they rely heavily on improvisation, each show will be different.

At first you might think that the JAMMitors are part of the cleaning staff at Future World. After all, they are dressed like janitors and they wheel around trash cans. It doesn’t take long to realize that they are instead a talented percussion team. Be warned, once you return home your kids are going to start hitting your trash cans, hoping to replicate the sound.

Serveur Amusant is a must-watch act in the France Pavilion. At first it looks like the restaurant staff is setting up a table outside. It soon turns into an amazing display of balance and strength. Just when you think that they won’t be able to add another chair to the pile, they add another chair to the pile. This is one act that you’ll want to make sure that your kids don’t try at home.

One of the most popular street shows takes place in the China Pavilion. Jeweled Dragon Acrobats has juggling, acrobatics, and so much more. They’ll leave you wondering “how did they do that?” after each trick. The show tends to draw crowds, so arrive early if you want to be able to see everything.

The ultimate street performers can be heard daily on Main Street, U.S.A. The Dapper Dans are a barbershop quartet, providing harmonies that will take you back to yesteryear. In their brightly colored pinstripe vests with matching pants and hats they are hard to miss. Sometimes they sing a capella, others they are accompanied by Deagan Organ Chimes. The Dapper Dans will sing some Disney classics, and also old time songs such as Mr. Sandman. No Disney vacation is complete without seeing this classic (and class) act.