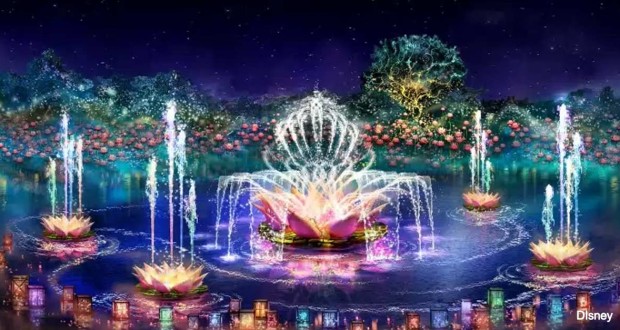 There’s seemingly no end to Disney’s creativity and this newest announcement about a nighttime show at Animal Kingdom is sure to wow guests!

“Expected to open spring 2016, “Rivers of Light” will be an innovative experience unlike anything ever seen in a Disney park, combining live performances, floating lanterns, water screens and swirling animal imagery.

“Rivers of Light” will come to life as a pair of mystical hosts comes to Discovery River bearing gifts of light. During the show, the hosts set out from the shore on elaborate lantern vessels for a dance of water and light to summon the animal spirits.”

Check out what Imagineer Joe Rodhe has to say about Disney’s plans for this nighttime spectacular coming soon to Animal Kingdom!

So, what do you think about this new development at Animal Kingdom? Share your comments on Facebook.

Below Is our article by D. W. Noonan “15 Things You May Not Know About Disney’s Animal Kingdom”

After security inspects your bags and you pass through the main gate, you find yourself in the Oasis. The Oasis serves as a welcome area where guests are transported from Central Florida to the wilderness lands located within Animal Kingdom. Originally, Disney planners named this area Genesis Gardens. Due to the potential controversy arising from the religious context of the name, Imagineers chose to go with something neutral, hence Oasis. The early design concepts even featured a walk through Noah’s Ark after you enter the park.

After leaving the Oasis and crossing the bridge to Discovery Island, visitors may notice another hidden treasure, the Wilderness Explorers booth. Not many guests stop to meet with the cast members stationed there, but those who do are given a field guide with a list of self-directed activities to perform throughout the park. Completing the challenges earns you sticker badges to place in your field guide. The experience enhances your visit to Animal Kingdom and provides you with a memorable keepsake.

In the heart of Discovery Island stands a 145 foot tall Baobab tree that truly isn’t a tree at all. Imagineers created it out of an oil rig designed to withstand hurricane-force winds. The sculpted animals that appear in the concrete “trunk” and “branches” have been painted to look natural, and the nearly 103,000 synthetic “leaves” were attached by hand rather than grown.

Even though the street stretching down the center of DinoLand U.S.A. appears to be a typical asphalt road, it’s actually made of concrete treated to resemble faded asphalt. Disney named it U.S. 498 in honor of Animal Kingdom’s opening day (April, 1998). The decision to use concrete resulted from Disneyland’s opening in 1955, when high heels, carriages, boots, and other objects marked up the asphalt pavement.

The rough ride park guests enjoy on DINOSAUR creates the sensation that they’re moving across the rugged terrain of the Cretaceous period. Imagineers could have accomplished this effect by laying bumpy tracks throughout the attraction, but they instead chose to make the individual “Time Rovers” simulate the experience using hydraulics. It’s sort like riding a mechanical bull, except the entire vehicle is riding it.

Original plans for Animal Kingdom included Beastly Kingdom, a section of the park featuring mythical beasts like dragons, unicorns, and the like. Disney planners eventually scrapped the idea due to budget constraints, but not before leaving a few clues behind about their initial designs. Notice the dragon silhouette on the Animal Kingdom logo, which appears on various signs, t-shirts, and the like. Mythical beasts also appear in other décor around Animal Kingdom, so look for them next time you visit.

Most experts didn’t think it could be done, but Disney magic defied them. Well, it was really more science than magic. Disney’s animal trainers were able to condition the bats living in the Maharajah Jungle Trek to respond to audio cues. They use a dog whistle to call the bats when it’s time to eat.

Tigers sleep up to twenty hours a day, especially if they don’t have to hunt. To ensure the tigers in the Maharajah Jungle Trek don’t get too lazy, Disney stimulates the big cats by introducing interesting things, like toys, treats, or fragrances, into their habitat. The goal is to activate the tigers’ animal instincts to investigate what cast members have left for them.

Disney’s Animal Kingdom not only serves as a zoological theme park, but also as a research lab that allows experts to observe animal behavior and a safe harbor for endangered species to reproduce. More than 150 species have reproduced in the park, including those that are threatened in the wild, like the Micronesian kingfisher and the white rhino.

The animals you see throughout Disney’s Animal Kingdom don’t actually sleep outdoors at night. Every evening, each of them returns to a facility specifically designed to accommodate each species. The trainers condition the animals to enter their sleeping quarters at the response of unique audio cues. Once the exhibits and attractions are cleared out, nighttime crews emerge to perform necessary gardening and maintenance.

You may wonder what kind of animal mind control voodoo the cast members at Kilimanjaro Safaris use to get the creatures to move closer to the vehicles. It’s as simple as using food to encourage animals to spend time near the path where the trucks drive. The meals are hidden in feeders made to resemble the natural terrain of the attraction. Think that tree stump is really a tree stump? Think again!

Though Kilimanjaro Safaris appears to be a sprawling savanna where animals can roam free, it is sectioned off to avoid undesirable encounters. Nobody wants a cheetah springing free of its location to mow down a kudu calf. Some animals can’t safely meet with humans either, which is why aggressive crocodiles and hippos won’t be attacking your vehicle, and lions are separated from everyone and everything by a moat that’s 21 feet wide and 18 feet deep. Disney Imagineers manage to hide these barriers from the casual observer to avoid spoiling the magic.

3. Hot Under the Mane

The African lions who make their home at Kilimanjaro Safaris came from a zoo in Oregon. The climate of Oregon vastly differs from Central Florida’s, so the sweltering heat presented a problem for the large cats. To make the overheated lions more comfortable and to keep them from hiding in the shade, out of the view of park guests, Disney installed air conditioning around the promontory.

At a staggering 110 acres, Kilimanjaro Safaris is the largest Disney Theme Park attraction in the world. In fact, you can fit all 107 acres of the Magic Kingdom inside Kilimanjaro Safaris. Naturally, all those animals need room to move, not to mention enough space to avoid one another.

Rising to 199 feet in height, Expedition Everest holds the distinction of being the tallest of Disney’s eighteen mountain-themed attractions. Actually, it is the tallest artificial mountain in the world. This means huge drops and lots of thrills for those brave enough to ride, but the key to truly enjoying this attraction is to avoid becoming a Yeti snack.