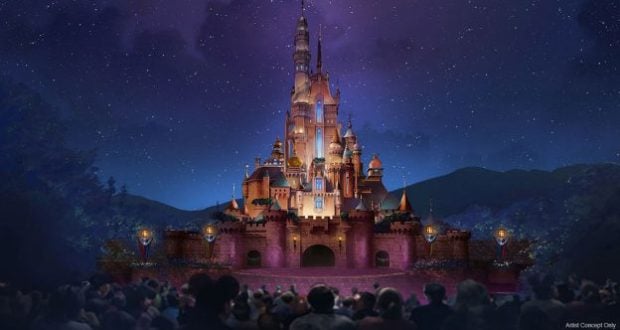 The Disney parks are truly fabulous places. Part of what makes them so wonderful is the fact that they are constantly evolving, ensuring they are using the best technology and effects available. This results in some truly spectacular performances and attractions, and helps keep the parks fresh and entertaining year after year, even if you’ve visited dozens of times before. The next few years are a prime example of this at Disney parks all around the world. There are lots of new, amazing things coming to these parks, and we are beyond excited. Below we’ve compiled a list of some of the most exciting experiences that are coming to Disney parks around the world soon.

Disneyland Park is getting a new parade! The colorful new performance will go by the name “Magic Happens” and will be marching down Main Street, U.S.A. beginning in the spring of 2020. The all-new stunning floats included in this parade will feature such themes as Coco and Moana, and the characters on the floats—as well as the dancers on the ground—will be wearing some of the most spectacular costumes out there. An LED-lit wave, a color-changing gown, and an all-new, energetic score all help make this one of the most magical parades yet.

Set to open in February 2020, Space 220 is a themed restaurant unlike any other. Here you can dine in a space station 220 miles above earth, looking out into the vast depths of space and down onto our blue-and-green planet as you enjoy your food and drink. In true Disney style, every detail of this experience is sure to be well themed and truly transport you into space for the duration of your meal. Dining reservations for this experience have not opened up yet. That said, we imagine the restaurant will book up quickly, so be sure to watch for your opportunity to snag a slot.

At the most recent D23 expo, it was announced that Shanghai Disney Resort would be getting an entire new land. This new area will be themed after the Disney movie Zootopia, and fans of the film couldn’t be more excited. This will be the first ever Zootopia-themed land in any Disney park, and according to the concept art will stay true to the movie in many ways. It will also include a major new attraction that brings the Zootopia characters to life using state-of-the-art technology. Unfortunately, no opening date for this new land has been announced, leaving us to wait with baited breath.

Frozen fans, rejoice! Parks around the world are adding a bit of Elsa and Anna into their attraction lineup. In Hong Kong Disneyland, this will come in the form of an entire new land. Arendelle: World of Frozen is set to open in 2021, and will put guests in the middle of the fantasy city of Arendelle. An entirely new coaster called Wandering Oaken’s Sliding Sleighs will live here, as will a replica of Walt Disney’s World’s Frozen Ever After.

Hong Kong Disneyland will soon be revealing its Castle of Magical Dreams, the new park centerpiece and a replacement to the Sleeping Beauty Castle. This castle has been completely redesigned to pay tribute to all of the Disney Princesses. It will do this by incorporating a variety of architectural styles from various countries, cultures, and time periods, plus a splash of storybook charm. A new daytime show will be performed in front of the castle, and a new nighttime spectacular will help showcase its beauty. Watch for the unveiling of this castle in 2020!

Though technically not in a park, we think this awesome new attraction deserves a mention. Disney Springs has been home to a Cirque du Soleil show before. That said, there has never been a Disney-themed Cirque du Soleil show before, and that is exactly what we’re going to see when the new show, “Drawn to Life”, opens in spring of 2020. “Drawn to Life” will feature many favorite Disney characters in an entirely new storyline. Collaboration between Cirque du Soleil, Walt Disney Animation Studios, and Walt Disney Imagineering made this show possible, meaning you can definitely expect a lot from it.

Walt Disney World’s Epcot is seeing an enormous overhaul in the next few years. One of the coolest new additions will be Remy’s Ratatouille Adventure. This new trackless dark ride will be a clone of the ride Ratatouille: The Adventure in Disneyland Paris. It will live in the France Pavilion and is set to open in summer of 2020.

Another new ride coming to Walt Disney World soon is Mickey and Minnie’s Runaway Railroad. This is another dark ride and will feature Mickey and Minnie alongside Goofy and other classic Disney characters. The ride will be housed in the Chinese Theater in Hollywood Studios—previous home to the Great Movie Ride—and will open in March of 2020.

Finally, there is Avengers Campus. This is a Marvel-themed land and we will see separate versions of it open at…

While the three lands will share a common narrative, each one will have a unique set of attractions and sets. This is amazing news for Marvel fans, as it means they can visit all three Avengers Campus locations and have totally different experiences at each.