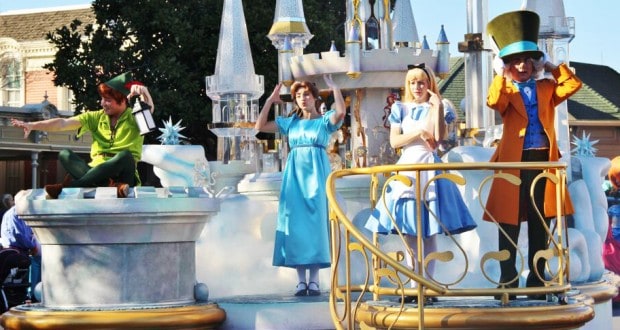 My Top 10 Disney Experiences (So Far!)

This may have been the hardest list I have ever written. Every trip to Disney is filled with great experiences! Narrowing them down was very difficult and I’m sure I’ll remember more later, but these are the ones that stick out in my mind as my top ten Disney experiences (so far!):

10. Waking Up to Peacocks Outside Our Camper in Fort Wilderness

This one is an experience that I almost remember clearly. When I was really little, my family would drive an RV down to Florida for the week. My grandpa made sure to get a spot in the 100 loop at Disney’s Fort Wilderness Resort. Fort Wilderness is a super fun place in general, but for me the magic came early in the morning. Alarm clocks weren’t necessary in those days. As soon as the sun showed itself, we’d begin to hear the distant caw of the resident peacocks. By the time we pulled on sweaters or shoes and stepped out of the camper, two radiant peacocks would be sauntering by us. Maybe they’d stop to peck for food or just to show off their beautiful colors, but they never stayed long. It was a pretty amazing way to start the Disney day.

9. Playing Red Light/Green Light with a Castmember During MNSS

I’ve talked about this experience before when praising Castmembers. When we were little, my cousins and I loved going to Mickey’s Not-So-Scary Halloween Party in Magic Kingdom. We thought dressing up and eating candy and staying up late while going on rides was just about the coolest thing ever. Even mundane things became magical that night. While we were walking the back path from Toontown (RIP) to Tomorrowland, a Castmember caught up with us and we began chatting. He saw that the kids were a little tired and restless, so he challenged us to a rousing game of Red Light/Green Light. You know, the one where you run really fast on Green Light and freeze on Red. We loved it. He kept calling out colors until we got to Space Mountain. These little experiences are the ones that we never forget.

When my family and I got the chance to visit Disneyland Paris, we practically had heart attacks. People gawked at us for dedicating a whole day to the foreign park, but we lived for it! We had no idea what to expect going in, so every moment was an experience. It hardly seemed real, actually. Walking down Main Street in Paris was bizarre because it looked and felt so much like the one in Florida (and California, for that matter). But we loved exploring the Park. We did just about everything that was open. We all agreed that we liked Disney World much better, but it was so special and exciting to visit Disneyland Paris. Not everyone gets to experience it, so we cherish those memories!

7. Counting Down to the New Year at AKL

My family loves when we get to spend the holidays in Florida. We were especially excited to celebrate the New Year in Disney! Earlier in the day we watched Big Hero 6 (one of my favs) in Disney Springs, then we headed over to Animal Kingdom Lodge for dinner at Boma. Boma’s buffet is amazing in itself, but it seemed extra special to have a big, great meal to end the year. When we finished, we went up to the lobby and saw a party being prepped! The Concierge desk gave us New Year’s Eve hats as we listened to the band and watched people dancing with each other and Castmembers. It was such a fun, lively environment and a great way to kick off the New Year.

6. Sitting at the Table Next to Karl Holtz on the Dream

Back in 2011, Disney Cruise Line unveiled the newest member of its fleet: the Disney Dream. So, because my family is sick, we had to book a cruise. We were able to secure a three-day out of Port Canaveral to check out the ship. Clearly we were not disappointed, but the biggest shock came at our dinnertime. As we were seated at our table for the cruise, our server, a friend of ours, said to us: “I’m sorry I’m a little frantic, Karl Holtz is at my other table.” It quickly dawned on us that Karl Holtz was the president of Disney Cruise Line and was sitting across from us. On the last day of the cruise we said hello and thanked him for our fantastic voyage. He thanked us and gave us his email if we had any suggestions for the future. My uncle actually emailed him, thanking him again. Mr. Holtz responded and sent him a gift package from the ship. It was unreal.

The first CD to play in my house at Christmastime is Amy Grant’s “A Christmas Album.” It’s tradition. I grew up listening to her as our soundtrack to the holidays. So when my dad surprised us with a trip to see Amy Grant narrate the Candlelight Processional in Epcot, I was psyched. It was also my first time seeing the show itself, which completely blew me away. Even if Amy Grant hadn’t been there I would have been hooked. But she came and narrated beautifully and tried her very best to not sing along with the choirs. It was such a special moment for my family and me and definitely a Christmas to remember.

4. Seeing the Original Cast of Disney’s Aladdin on Broadway

The Disney and Broadway worlds exploded in 2010 when Alan Menken announced that Aladdin would be coming to the Great White Way. I don’t live far from New York City, so seeing the show was a no-brainer. My mom and I got tickets for the show in its opening year and were so excited to see the original cast, especially Jonathan Freeman-the voice of Jafar in the movie! It was my first time seeing a Disney Broadway musical, so I was pretty much in heaven. I was glad that the show was so successful and that we got to be a part of that!

3. Watching Peter Pan and Captain Hook Sword Fight on the Side of Cinderella Castle

I love the little moments that happen when you’re least expecting them-the ones that seem completely magical. They happen all the time at Disney, but not everyone catches them all. My favorite of these moments came one vacation in Magic Kingdom. We were walking along one of the paths to Fantasyland when we heard a rooster crow; only it wasn’t a rooster at all. It was Peter Pan who came running out of a balcony on Cinderella Castle with his dagger drawn and laughing. Close behind him was Captain Hook who was clearly irritated. They began scaling the side of the castle, laughing and scowling and sword fighting the whole way. When they finally reached the bottom, they just ran off and slipped through a side door. There was no explanation, no follow-up, nothing. It was just a burst of magic in Magic Kingdom.

One of the coolest things about Disney Cruise Line is how much more freedom the characters have. In the Parks, characters are never allowed to just walk about without a handler nearby. But on the Cruise Line, it’s incredibly common to just happen upon a character in the hall or elevator and say hi. During one trip, I was having a relaxing day up on the top deck of the Dream and decided to play some mini-golf. Well, I wasn’t the only one with that idea. As I grabbed my club, a big white glove reached for one, too. Max, Goofy’s son, gave me a wave and let me go first. We played the holes and had a grand old time. Lots of other people joined in eventually, but it was so unexpected and perfectly normal at the same time.

1. Getting a Private Backstage Tour of the Walt Disney Theater on the Magic

As you could probably tell, Disney Cruise Line is extremely important to my family. I’ve made amazing memories on board and some pretty special ones. When I was fairly little, my dad went to a behind the scenes tour of the Walt Disney Theater, the main entertainment spot on board ship. The tour was for adults only, so I snuck in at the very end to find my dad. When most people had left, my dad asked the guide if he could show me some of the secrets. Well, the guide delivered. He brought me up on stage and let me sit and play with some of the props and take pictures. My dad asked if he could lower the stage for me to see. Unfortunately, he couldn’t, so instead he brought us backstage, through Castmember corridors, downstairs (where we passed Cinderella) and into the set storage room. I got to play with the Sebastian and Flounder puppets from the main show and see how the stage mechanics work. Theatre is a huge part of my life now, and I still credit that experience as one of the reasons why. So, thanks Disney!

2016-01-03
Molly Elias
Previous: 10 Excellent Tips For Budgeting And Planning Your Disney Trip
Next: 6 Points To Keep In Mind About Dining At Walt Disney World