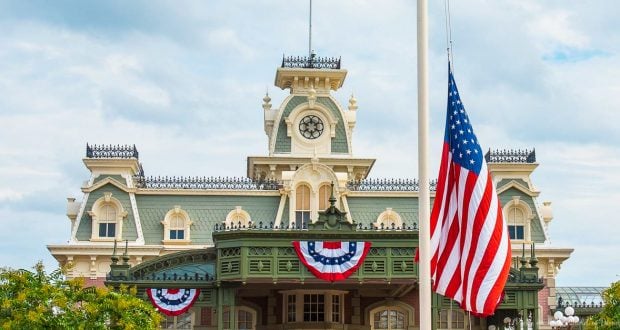 Of all the magical experiences available to Guests at Magic Kingdom at the Walt Disney World Resort, the most ceremonial one has to be the daily Flag Retreat. This 15-minute observance takes place every day around 5:00 p.m. at Town Square as a show of gratitude to veterans for their service and sacrifice to our country. Here are some other interesting things about the Flag Retreat.

The first ever Flag Retreat ceremony at Magic Kingdom took place on October 1, 1971—the day Magic Kingdom opened to the public for the first time. It has been a daily occurrence ever since. The Flag Retreat ceremony usually takes place at 5:00 p.m. But occasionally—due to other activities taking place in the area—the ceremony may begin 15 to 30 minutes later than usual. To be sure you arrive on time for the ceremony on the day of your visit to Magic Kingdom, check the Times Guide that day or ask a Cast Member.

5. There’s more to it than simply lowering the flag.

It would be in keeping with requirements about the American flag for Disney to simply have Cast Members lower the flag, remove it from the pole, fold it and put it away for the evening. But because it’s a flag at Magic Kingdom at Disney World, there’s got to be more magic—more pomp and circumstance to it—than just that. The full ceremony lasts approximately 15 minutes, and Guests are welcome to participate. 4. The ceremony is very moving.

Guests gather at Town Square at Magic Kingdom to witness the Flag Retreat ceremony. It begins with the Pledge of Allegiance, after which the trumpets sound Retreat. Then Disney’s Philharmonic plays the National Anthem as the flag is lowered from its position high above Main Street U.S.A. Guests are then led in singing “God Bless America” while members of the Color Guard remove the flag from the staff and fold it.

3. A veteran is honored.

After the flag is removed from the staff and folded by the Color Guard members, it is handed to a Guest veteran who is visiting the park that day as a symbol of gratitude for his or her service to our country. At the end of the ceremony, there’s a short procession down Main Street U.S.A. as musicians play various familiar United States military songs. After the medley of military selections is played, the ceremony is concluded. Well, “secret” is a misnomer. The Flag Retreat ceremony is mentioned in the Times Guide at Magic Kingdom, as well as online at Disney World’s official website. But it’s an experience that many Guests—even those who frequent the parks often—have yet to enjoy. Maybe it’s because it takes place later in the day. Maybe it’s because it takes place at the very front of the park while Guests are in other parts of Magic Kingdom. There are several reasons—but now that you know about it, be sure to be a part of the ceremony during your next day at Magic Kingdom. It’s a very moving, very special ceremony—and an experience that makes quite the lasting patriotic impression on Guests who witness it.