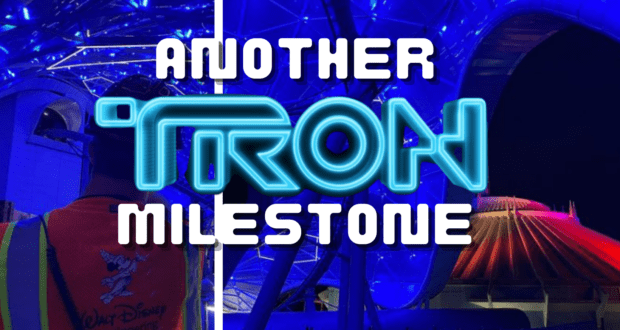 Walt Disney Imagineers at Disney World have reached yet another milestone in the construction of the new TRON Lightcycle/Run attraction in Tomorrowland at Magic Kingdom.

On Wednesday, Imagineers shared a post on Instagram that features three photos that serve as evidence of their progress on the newest Tomorrowland attraction. The huge canopy for the attraction was lit up on Wednesday, and Imagineers say that in the coming months, even more visual “show elements” will be added to the canopy and to the exterior plaza area of the attraction.

This curved-wave structure serves as the Upload Conduit to the Grid, where Guests, known as Users, will race beneath on Lightcycles as they begin their competition. In preparation for the race, the Show Lighting team is hard at work testing the system and programming more than 1,200 fixtures across the surface. The canopy and exterior plaza will be brought to life in the coming months as the project team continues uploading and integrating additional show elements.

Construction has come a long way, especially when compared to the progress featured in this video from Disney Parks in 2019:

The new TRON attraction was first announced during the 2017 D23 Expo on July 15, 2017. The new attraction was originally slated to open to Guests in Fall 2021, but because of delays related to the coronavirus pandemic in 2020, the opening date had to be adjusted. The roller coaster attraction is an exact copy of the same attraction at Shanghai Disneyland.

The coaster will reach speeds of almost 60 miles per hour, the fastest of any of the coasters at the Walt Disney World Resort so far.

In May, Imagineers shared the news that the new coaster had finally undergone its first full-speed launch.